Will verdict change or confirm preconceived notions of the role of race in the case? 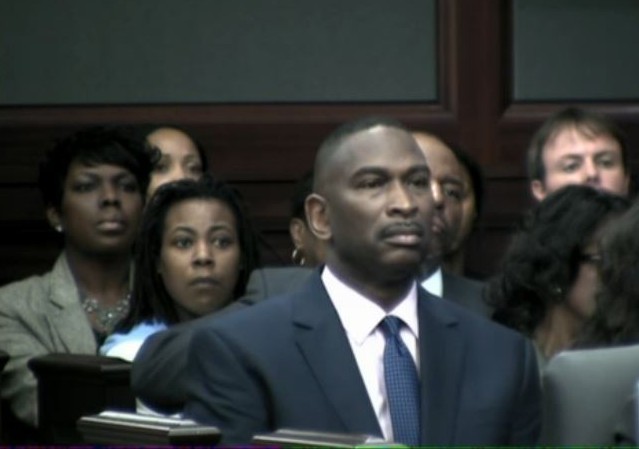 As of this writing, we still have no verdict in the Michael Dunn “Loud Music” murder trial.

The jury now is in its 25th hour of deliberations, and has asked several questions about the law, including self defense. The verdict could come at any moment.

It’s interesting to watch the Twitter chatter as the verdict is unknown. as people can project their feelings without knowing the result. Race is a prism for many, who are outraged that the jury is taking so long.

The #DunnTrial will determine whether or not an unarmed black child's body is, in and of itself, a deadly weapon.

With certainty, If #JordanDavis had answered "Yes Sir", lowered his head& driven away, he'd still be alive. JimCrow. JimCrow #DunnTrial

If the roles were reversed I wonder how long it would have taken the jury to convict? #BlackBoysMatter #DunnTrial #BlackMalesLifeHasValue

By the looks of it, being a young black male in America in itself is a 'deadly weapon' as to why shooting them is acceptable. #DunnTrial

Reality, though, is that a young black man is much more likely to be shot by another young black man, than by someone who looks like George Zimmerman or Michael Dunn:

#DunnTrial I guess it's o.k. for blacks to kill blacks? OUTRAGE? Anyone? Oh, I see you all are busy hating white men pic.twitter.com/RPU8PxPPqF

Does that fact matter?

Here is an example of RWNJ not understanding why #DunnTrial represents injustice. ANOTHER IGNORANT MORON #UniteBlue pic.twitter.com/LJoCWTBj0S

Jury deliberating speaks to how hard it’s to convict someone for killing black males unless the offender is a black male #DunnTrial
3:46 PM – 13 Feb 2014

This comment reminded me of how quickly an all-black jury returned a verdict in the O.J. case. I’m not a lawyer, but I think it’s called “deliberation” for a reason.

Excuse me, but is that a bad thing? After spending time living in Erie PA, Cincinnati OH and Louisville KY I have had ample time to consider that “black boys/men” went FAR OUT OF THEIR WAY to make whites uncomfortable in the city streets, city buses and public social venues. Basically any place that blacks and whites mingled, a significant percentage enjoyed being offensive to whites or Hispanics.

For decades I’ve heard that the black culture needs to have it’s own identity – well, they have an identity now. Might I add, I’m unaware of any other cultural group that would wish for such a pungent self-destructive identity either – if they want to live like thugs, then let them die like thugs and stop the whining.

I hope that’s your real name you posted under. It will be handy at your trial, to ensure your conviction.

Conviction? Conviction for what, speaking the truth?

Well, actually, it’s only part of the truth; things like ‘life is fair’, ‘you reap what you sow’, ‘that’s tough, get over it’, etc. are just assumed to be understood.

The jury questions reported by Andrew reflect a jury that is seriously going about its duties.

But for the racist haters of the Left, anything but having the jury stand up in unison at the close of the trial and shout “GUILTY…BURN HIM!!!” is indicative of how terrible America is.

For my $.02, the guy is rightfully going down for murder, and there never was any justification for his conduct.

The only evidence of self-defense case is Dunn’s own testimony at trial–so much so that I very much doubt the jury would have even received a self-defense instruction had Dunn not testified.

Such being the case, had Dunn stayed at the scene, or fled only as far as necessary to secure his safety, and promptly called the police and reported the incident, whether I could conclude he acted in self-defense would necessarily be a function of his perceived credibility. (Not to mention that HAD he done so, the prospects for the police having recovered the purported shotgun would have been vastly increased.)

Dunn’s flight from the scene and failure to ever contact police prior to his capture the following day, however, profoundly damages his credibility in my eyes. That alone makes me seriously question his claim of reasonable self-defense even for the first three rounds (and the justification only diminishes for the successive rounds, especially the last three).

We must, of course, keep in mind that the standard by which the jury must judge his self-defense claim is not whether it is more likely than not that he acted in self-defense, but whether the state has disproved his self-defense claim beyond a reasonable doubt. That’s a very high standard of proof we demand before we find someone guilty of a crime, and the same standard of proof before we strip someone of their claim of self-defense. To the extent we expect a jury to be deliberate and cautious before concluding the state has met its burden in terms of the criminal charge, the same should be expected in the context of disproving self-defense.

Nevertheless, I personally have great difficulty in accepting that lawful self-defense includes within it’s range of acceptable conduct flight for purposes other than safety and a lackadaisical or nonexistent sense that police should be contacted promptly after knowing one has taken a human life.

That someone, or more than one person, on the jury would consider Dunn’s post shooting conduct still within the range of lawful self-defense raises the question of what the hell is going on in Jacksonville to foster such a world view? Not living there, as the jurors do, I don’t know. But my sense is that it must be awful.

You are right to invoke the local worldview as it appears that Dunn’s attitude is a projection of that world as do the projectiles of his weapon.
Fear? Uncertainty? Anger?
No excuse,bottom line.

Holding a gun in your hands (long or short, CCW or not, at home or elsewhere), brings with it an automatic obligation to those around you. You have chosen to take control of a very dangerous object. Just like driving a car, in a sense.

Among those obligations is not only to use it properly, but also to abide by society’s rules such as ‘reporting a car accident’ or ‘reporting a shooting’.

When you fail to do so, it goes against the credibility of anything else you say about an incident.

For instance, if you are known to have been drinking just before an incident (and MD admits this, as does other testimony), and fail to report that incident timely, leaving the scene instead, this results in an inability to test your state of sobriety at the time, etc. This then leaves that question ‘open and nagging’, at best. It also makes any ‘reasonable juror’ wonder what else you may be hiding. Thus, to your credibility.

I am relating this from the POV of someone who has not followed this case much, as I early concluded this killing was not self-defense…and the judge was from Bizzaro land.

That said, the questions as I understand them are not indicative that the jury is considering self-defense necessarily.

I think they could just be getting the ground-rules down, reflecting that they understand the multiple counts they must judge, and confirming what they (or some of them) understood.

In the past I have been on many juries including a trial re husband-wife battery, a local county’s grand jury where I heard weeks of info about gang crime and check forgery, etc. and a federal jury where I was chosen forewoman over a case of interstate trafficking in stolen goods.

There is a lot of legal information to process and especially if one is new to the laws involved and to the whole process.

Andrew brings up a good point – if you are going to discharge a firearm in self-defense, you really need to report it to the police ASAP. Think of how differently George Zimmerman acted when the police arrived – he immediately told them that he had discharged his weapon, shooting Martin, and surrendered his firearm. He might have tried to run away. He didn’t.

Both are based on stereotyping of both whites and blacks, by both blacks and whites.

I’m a white man with a gun. I’ve never pointed it at another human being (or other living creature). I’ve known, met, or ‘been near’ I don’t know how many blacks in my life – thousands. I’ve had one threaten to kill me. I do not hold that against the others. He did not threaten to kill me because he is black, he did it because he was drunken asshole. I had my gun, but did not pull it out. Not because he was black or white, but because I was able not to. A white kid would have gotten no more or no less from me.

People like MD do not represent me. Regardless of whether he was right or wrong, he does not ‘represent me’. No on does, only I represent me.

People like Jordan Davis (again, be he right or wrong), or Trayvon Martin, do not ‘represent black people’.

I have seen nothing to indicate what you say above on this web site.

Yeah. Ragspierre is scratching his head over that one, too…

I do not get this statement – “The core of the argument on the other side is ‘blacks deserve it’.” What blacks are you referring to and who thinks that way?

The people who are chatting on Twitter might behave entirely differently, if they had the responsibility of being on a jury.

That said, the analysis in some of them is about as deep as an oil slick on a rain puddle.