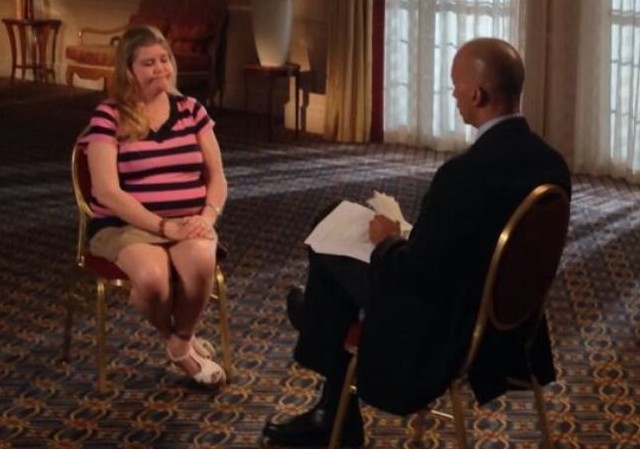 A juror from the “loud music” murder trial of Michael Dunn for the shooting death of Jordan Davis became the first to speak with the press, on this evening’s episode of Nightline. (Video of this interview is embedded at the bottom of this post.)

The juror in question was juror #4, previously anonymously profiled by journalist Stephanie Brown of WOKV as:

To refresh our recollection, the jury consisted of eight whites, two blacks, one hispanic, and one asian.

The hubbub about the verdicts in this case has, of course, centered on the failure of the jury to agree on a verdict one way or the other on the killing of Jordan Davis.  Dunn had been charged in the indictment with first degree murder, and this by law also covered the automatically lesser included charges of second degree murder and manslaughter.

Because the jury could not agree on either a particular charge or an acquittal. observers were left speculating as to the specific cause of the hung jury on the Davis charge. Were they merely unable to agree on the specific degree of intent or guilt among first degree murder, second degree murder, and manslaughter?  Or was the issue not one of degree, but of fundamental principle–did at least one juror believe that the State had failed to disprove self-defense beyond a reasonable doubt with respect to the initial three shots that had killed Jordan Davis.

We at Legal Insurrection had predicted from the day of the verdicts that it was far more likely that the failure to achieve a verdict on the killing of Davis was based on some jurors believing the State had failed to disprove self-defense beyond a reasonable doubt, and not on merely a disagreement involving degree of guilt.  When jurors merely disagree on degree of guilt, four days of deliberations almost invariably leads to a compromise.  When one or more jurors disbelieves guilt, however, compromise is far more difficult.

In this case, juror #4 tells us that the initial polling amongst the jury on the Davis charges was 10 to 2.  Ten jurors believed Dunn guilty of the murder of Jordan Davis, and two were unconvinced.  Interestingly, after four days of deliberations, this vote had changed to 9 to 3–now three jurors believed self-defense had not been disproved beyond a reasonable doubt, rather than just two. Given this trend, it is no wonder that the jury agreed to ultimately give up on the issue of the killing of Jordan Davis.

A key portion of the trial, the juror said, was when Dunn insistently believed that he was in danger–“I thought I was going to be killed”–followed by Strolla’s urging that they start with “page 25” of the jury instructions, the section that defined the justified use of deadly force in self-defense.

The juror interviewed also conceded that at times the deliberations were so heated that people were shouting and cursing at each other. Several times during deliberations Judge Russell Healey raised concerns that those in the court room might be able to hear the jurors deliberating. It seems clear now that what might have been heard was not moderate discussion, but screams and curses.

Amongst the jurors who would have found Dunn guilty of the murder of Jordan Davis, most believed that Dunn had had a way out other than the use of deadly force.

This juror also placed some emphasis on Dunn’s denial of the use of the phrase “thug music,” when the jury was able to hear him use the term “thug” repeatedly in his interview with homicide detectives.

The juror was asked specifically how they could vote to convict on the attempted murder charges, but not on the murder of Jordan Davis charges.

Exactly as predicted here at Legal Insurrection, the juror explained that the minority on the jury felt that the first few shots at Jordan Davis might have been justified, but that the later shots when Dunn got out of the car and kept shooting was stepping over the line, and not justified.

When the juror was asked whether she believed Dunn had options other than firing at Jordan Davis and the others in the SUV, she stated that she did. Dunn, she said, could have rolled his windows back up, ignored the taunting, put his car in reverse and backed out of the parking spot, moved over to a different parking spot . . . “that’s my feeling,” she answered.

I don’t like to brag but what the heck, I’ll make an exception this time.

A down arrow? For what?

Oh, it must be someone who resonated with A Doctor Named Sue on the microaggression thread.

I wonder if a stronger prosecutor could have fared better here. Granted I missed a lot of the trial, but from what I did see Wolfson and Guy were less than impressive. Are not some trial outcomes influenced by those arguing the case?

You betcha. Like that fool who insisted that OJ try on the bloody gloves in front of the jury.

Actually, ASA Wolfson was very impressive for a young attorney in her first major case as a prosecutor. Not to mention she is very easy on the eyes.

Guy is just a buffoon, imho.

Actually, I thought that Corey did a fairly good job as lead in this case. She will always have my ire from her behavior surrounding the Zimmerman case, but I am willing to give credit where credit is due.

Pretty much what I would have written (and have, probably, somewhere or another). 🙂

Yep, but we seem to have a tendency to agree on most things it seems.

Maybe being the lead/managing attorney is just Corey’s forte. Frankly, I think Guy’s more subdued attitude came from the fact that he really couldn’t yell obscenities at the top of his lungs in this trial. That and apparently his favorite playmate Bernie got left at home.

Hey he did bring the doll.

I have to agree, I was distinctly underwhelmed by both Guy and Wolfson at all points of this trial. (Yes, I know, it’s early in Wolfson’s career as a prosecutor – and it was very obvious.) The only aspect of Corey’s performance that was positive is that she didn’t live down to her reputation as an expensive thug.

It is not about race? I believe the juror, but I do have food for thought:

The quote is from http://www.theatlanticcities.com/politics/2013/07/its-not-just-zimmerman-race-matters-lot-stand-your-ground-verdicts/6195/

I didn’t vett the politics of the author of the study. Maybe there are perfectly good reasons for that alleged disparity described in the study or the study is bogus. You guys can argue your a-$$’es off (or not). I really don’t care.

Personally I think it should take more than just saying you saw a gun to win a SD case. I bet it would take a lot more if the defendant was black. So even if race is never mentioned, it doesn’t mean race isn’t there. Maybe it just doesn’t get said out loud anymore. Maybe code words get used or people just think it to themselves. I do know that all I had to do was suggest there was an elephant in the room and I got jumped on. That make me certain that there was one. The lady doth protest to much.

It took over a hundred years for the 13th, 14th and 15th Amendments to start to be the law of the land. Maybe it will take another hundred to finish the job.

Thank you Andrew. I think you did a masterful job. I would love to stick around and have a thoughtful discussion, but I don’t think I am can be heard. I am dismissed as troll, rather than a reasonable person with a somewhat different point of view. So that makes it a waste of time.

For someone who “won” a self-defense case, Dunn is going to be spending a couple decades behind bars. If that’s winning, no thank you.

“I bet it would take a lot more if the defendant was black. So even if race is never mentioned, it doesn’t mean race isn’t there.”

The problem with statements like this is it kind of begs the question: What sort of racial thumb on the scales of justice do you propose?

Hey, did it never occur to you that maybe 30-35% of white-on-black shootings, and ~3% of black-on-white ones, are found to be justified, because that’s about how many are justified? Blacks commit a lot more violent crimes per capita than whites do; you can argue all you like about the reasons for that, but you can’t dispute that it’s a fact. And while the vast majority of criminals attack people who look like them, it’s also a fact that black criminals attack white victims a lot more often than white criminals attack black victims. So it makes sense that white people will defend themselves from black criminals more often than black people will defend themselves from white criminals.

Also bear in mind that, mostly for reasons of economics and geography, decent black people are probably less likely than decent white people to own the means of defending themselves. The ones who don’t, don’t show up in your statistics. Gun ownership among black people is likely to be weighted more towards criminals than it is among white people. And therefore black people who end up shooting white ones are more likely than white people who shoot black ones to be doing so in the course of a crime.

If you read the ABC news report on this juror — http://abcnews.go.com/US/juror-loud-music-trial-wanted-murder-conviction/story?id=22571068 — it says that the 9-10 members of the jury who did not believe that Dunn acted in self-defense believed that his “options” which could have avoided the confrontation altogether, such as rolling up his window, putting his car in reverse, or simply ignoring the loud music, bore on the question of whether of he was facing an eminent threat: “‘[The jury instruction] said if he believed that he had an eminent threat to himself or his fiancee, so that was a thing that those two folks believed – he was frightened and there was no other option for him in regards to Mr. Davis,’ Valerie said. ‘The rest of us were 100 percent sure, you didn’t have to react [with gunfire], you could have had another option. … We looked at a lot of evidence – and myself, it was where the gunshots were, the timing. Could he have had other options? To me, [the shooting] was unnecessary.’ … Valerie believes that Dunn could have rolled up his window, put his car in reverse, or simply ignored the loud music blaring from the other car.”

So if all 12 jurors had felt this way and convicted Dunn, could that have been a form of reverse jury nullification, one in favor of prosecution, rather than against it? Or would it have just been a case of the jury not just deciding the case on what they felt was right, rather than following the instructions/law?