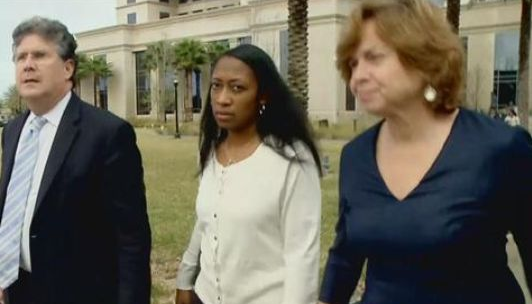 Florida news outlets — including First Coast News — are reporting  today that Marissa Alexander has had her re-trial delayed until July 28.

The re-trial had been scheduled to being in March.  The delay was the result of a motion by the defense.

Given that it seems most unlikely any new evidence or legal arguments will develop in that additional time, the four month delay suggests the defense may attempting to buy time to negotiate a plea agreement.  Should Alexander be retried on the same evidence as was presented at her first trial, a re-conviction seems all but unavoidable.

In 2012 Alexander was convicted of three counts of aggravated assault for firing a bullet past the head of her estranged husband and his two minor children.  Under Florida’s “10-20-Life” law requiring mandatory minimum sentences for the use of a gun in a crime, she was sentenced to 20 years in prison.

An error in the jury instructions on self-defense at her trial won her the re-trial now delayed until July.

The case of Marissa Alexander has been covered extensively here at Legal Insurrection, including in these prior posts:

No Bail for Marissa Alexander, Case Held Over Until January

The Marissa Alexander Case Wasn’t About “Stand-Your-Ground” Either

While I didn’t see what was presented at the first trial and IANAL, this frankly looks like an angry woman who wanted to kill. She missed.

It was, in my opinion, attempted homicide. Period.*

Hello. That’s exactly how the prosecutor and the Florida media want you to see it. But when you look into the details you see something very different. You see a domestic abuse survivor who was beaten along with her unborn baby into the hospital. When she went back to the scene of the beating,
after filing for a divorce, after getting a restraining order, and after delivering the baby who remained in intensive care, she was set upon again by the serial abuser.
She could have killed him with impunity but instead she fired a single warning shot. She is being punished for her mercy.

“She could have killed him with impunity but instead she fired a single warning shot. She is being punished for her mercy.”

That would explain why she called the police as soon as safety allowed to report the vicious attack upon her that compelled her to use deadly force in her defense.

She never called the police to report the incident? The cops had to come find her?

You and the prosecution like to point out the fact that Marissa did not call the police. This assumes that her enraged husband politely handed the phone over to her in working order. I don’t see that happening. But, even if it did happen like that I’m sure that Marissa didn’t expect Rico to call the police and turn himself in. He was after all violating an order of protection and surely would have been prosecuted for that. I’m sure she was quite shocked when the police showed up. Not only would she have thought it odd for Rico to incriminate himself but more importantly, if she did send Rico to jail, how would he possibly be able to support her and her 10 day old baby that was in the NICU? She was basically still his economic hostage even though she had avoided a trip to the hospital this time.

Here’s a link to tons of information about this case:
http://www.scribd.com/collections/4303296/Marissa-Alexander

This includes a 6 page long history of criminal violence perpetrated by the abuser turned accuser which was almost certainly concealed from the jury. For every reported incident there are probably 10 unreported incidents.

Marissa by the way had no criminal record of any kind before firing the warning shot.

Also included are detailed reports of previous occasions when the abuser turned accuser attempted to frame other women. They also recount living in terror of this violent abusive and volatile player who got 4 of them pregnant out of wedlock. More information almost certainly concealed from the jury.

There’s also a copy of the restraining order which was supposed to protect Marissa.

Fair enough, I’ll take a look at links when have time (not today).

Except please, a picture of someone else’s abuse injuries tells me nothing about Alexander’s purported injuries, except that apparently there’s no photo available of hers.