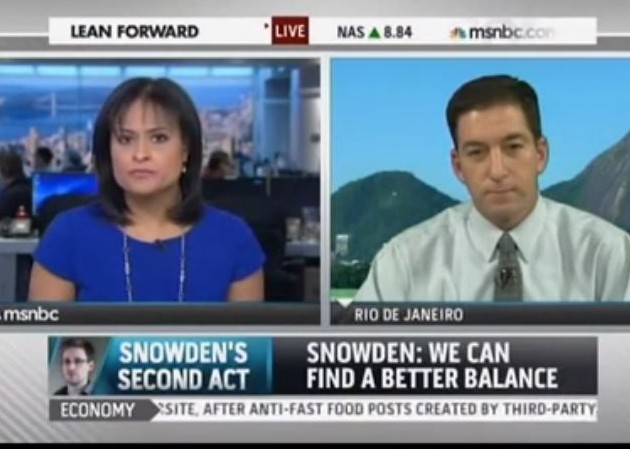 I’ve had my disagreements with Glenn Greenwald as to the term Israel Firsters and the Snowden damage to our foreign intelligence operations, but this is pretty funny.

Via Mediaite, Greenwald Snarks at MSNBC: I Defend Snowden Like You Defend Obama ’24 Hours a Day’ (h/t Jim Hoft):

Things got heated when MSNBC anchor Kristen Welker cited critics who’ve accused Greenwald of “crossing a line” in his defense of Snowden. “What do you say to your critics who say you’ve become more of a spokesman for Edward Snowden?” she asked.

“I think that’s ludicrous is what I say to that,” Greenwald shot back. “Every journalist has an agenda. We’re on MSNBC now, where close to 24 hours a day the agenda of President Obama and the Democratic Party are promoted, defended, glorified, the agenda of the Republican Party is undermined. That doesn’t mean the people who appear on MSNBC aren’t journalists, they are.” …

I think the point is not so much about MSNBC and what happens here,” Welker said in defense of her employer, “but more that sometimes when you talk about Edward Snowden you do defend him, and some people wonder if that crosses a line.”

“Sure, I do defend him just like people on MSNBC defend President Obama and his officials and Democratic Party leaders 24 hours a day.” When Welker pushed back that “not everyone on MSNBC does that 24 hours a day,” Greenwald conceded that it’s “not everybody, but a lot of people do.”

This is getting MSNBC Ugly and I hope they all eat each other.

Who knew – when they act and talk like sewer man Ed Norton and bus driver Ralph Kranden.

One good thing: Greenwald, as journalist, having verified MSNBC’s almost absolute bias, indirectly reminds us that there is almost a direct correlation between Obama’s poll numbers and MSNBC ratings. Sponsors take note.

God, Greenwald’s snarky comments musta hurt.
Maybe CVS or Walgreen’s could send a care package of a dozen tubes of Anusol HC cream generic over to the MSNBC studios to ease their discomfort. Spirit o the season thing, yano.