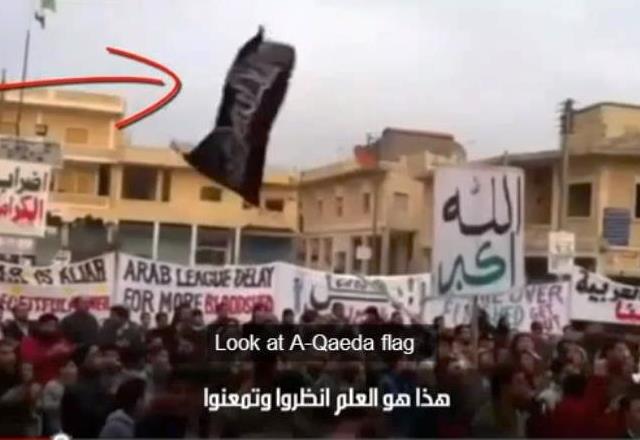 One of President Obama’s pitches for re-election was “Osama bin Laden is dead and General Motors is alive.” Or as the President said, slightly more elaborately, in a speech shortly before his re-election:

Remember, in 2008, we were in the middle of two wars and the worst economic crisis since the Great Depression. Today, our businesses have created nearly 5.5 million new jobs. (Applause.) The auto industry is back on top. (Applause.) Home values are on the rise. (Applause.) We’re less dependent on foreign oil than any time in the last 20 years. (Applause.) Because of the service and the sacrifice of our brave men and women in uniform, the war in Iraq is over. The war in Afghanistan is winding down. Al Qaeda is on the run, and Osama bin Laden is dead. (Applause.)
So we’ve made real progress these past four years.

Yes, Al Qaeda is on the run.

Yemen which has been in a state of political turmoil since the ouster of its long time dictator, Ali Abdullah Saleh, is facing two insurgencies in the north: one are the Iran backed Houthi separatists and the other are Salafists. Both groups are fighting each other as well as Yemen’s central government.

The attack on Thursday killed soldiers, doctors, patients and a number of foreigners, and wounded more than 160 others. The militants blew open an entrance to the compound with a car full of explosives, then gunned down civilians at a hospital inside, witnesses have said. …

Some of the Qaeda-linked sites said the militants were seeking revenge for Yemen’s coordination with the United States on drone strikes that have killed members of Al Qaeda. One of the sites is a Twitter account said to belong to Al Qaeda in the Arabian Peninsula, a Qaeda offshoot active in Yemen, but this could not be independently confirmed.

The daylight assault on one of the government’s most important security facilities appeared to mark a new low in Yemen’s descent into chaos and instability since its longtime president, Ali Abdullah Saleh, was forced from power after a popular uprising in 2011.

The Al Qaeda affiliate in Iraq and Syria, Islamic State of Iraq and al-Sham (Syria) or ISIS, is becoming increasingly brazen. The Washington Post reported on an attack in the Iraqi city of Kirkuk.

The assault began at mid­day Wednesday, when an operative drove to the entrance of an intelligence headquarters and blew up his explosives-laden car. A second attacker followed on foot, spraying gunfire and then detonating a suicide vest.

As snipers fired from the roof of a nearby shopping mall, at least six attackers managed to breach a security cordon and enter the headquarters. The overwhelmed local police failed for several hours to gain control of the situation; televised footage showed officers peering around the corners of buildings and firing at the snipers without aiming.

Reuters reports that ISIS had ambitious plans that were thwarted:

He said that late last month the army uncovered an ISIL plot to seize border towns near Syria in western Anbar province and Anbar’s main cities of Ramadi and Falluja. The plan was thwarted by a raid on a camp in Anbar’s desert just two days before it was to have taken place, he added.

Fighters had planned to attack police stations, an army operations center for four provinces in western and northern Iraq as well as government buildings in Ramadi and western towns, the officer said.

Iraq Anbar province is in the west, bordering Syria. It was the site of the “Anbar awakening,” in which American forces enlisted tribal leaders to repel Al Qaeda during the surge. ISIS’s resurgence threatens to undo the gains of the surge.

Perhaps Al Qaeda’s biggest recent success has been in Syria. Last week Reuters outlined the methods ISIS has employed in order to seize much of northern Syria the result being:

Whether through weakness or a desire to focus on Assad, rebel units are making way for the Islamic State in Iraq and the Levant (ISIL), an al Qaeda affiliate led by foreigners hardened by guerrilla warfare in Iraq, Chechnya and Libya.

The landgrab has given radical jihadists a large territorial base in the heart of a Middle East convulsed by the civil war raging in Syria since 2011.

This week ISIS kidnapped a human rights lawyer who had been one of the “early leaders of the uprising:”

The abduction of the lawyer, Razan Zeitouneh, came hours after relatives and colleagues of two Spanish journalists kidnapped by Islamist extremist fighters in September in northern Syria made their plight public after months of secret attempts to free them stalled. One of the captives is Javier Espinosa, an experienced correspondent for the newspaper El Mundo, who has taken grave risks to cover the Syrian conflict, returning many times after surviving the government bombardment that killed two fellow journalists, Marie Colvin and Rémi Ochlik, in the central city of Homs in February 2012.

The two abductions contribute to fears that the most violent side of the Syrian insurgency is silencing advocates of the freedom and political rights that were the original demands of those protesting against the Assad government in early 2011 and is playing into the hands of the government, which portrays itself as the only alternative to extremist rule.

ISIS broke an apparent truce with the Free Syrian Army (FSA) and killed two of its top commanders.

The two FSA commanders, Mohammad al-Qadi and Ahmad Jahar, were taken by members of Islamic State of Iraq and al-Sham (ISIS), a teaming of al Qaeda’s Iraqi cell and affiliated Syrian militant groups, during a cross-border supply run from Turkey into the northern part of the country.

Their bodies were found outside an ISIS-controlled area near the town of Aziz, 20 miles north of the opposition stronghold of Aleppo, according to local news reports.

Responding to reports that Al Qaeda allied rebels had been taking over warehouses of supplies the United States suspended all aid to Syrian rebels. These advances also chased FSA leader, Salim Idris, out of Syria.

The Islamists also took over key warehouses holding U.S. military gear for moderate fighters in northern Syria over the weekend. The takeover and flight of Gen. Salim Idris of the Free Syrian Army shocked the U.S., which along with Britain immediately froze delivery of nonlethal military aid to rebels in northern Syria.

The turn of events was the strongest sign yet that the U.S.-allied FSA is collapsing under the pressure of Islamist domination of the rebel side of the war. It also weakened the Obama administration’s hand as it struggles to organize a peace conference next month bringing together rebels and the regime.

Though the Islamists who took over the warehouses are not officially part of Al Qaeda, they share the same goals as ISIS and they have launched joint operations together.

Al Qaeda isn’t running away; it is running to new opportunities in Yemen, Iraq and Syria. Additionally, elements of Al Qaeda threaten Turkey, Lebanon and Jordan contributing to even greater instability in the Middle East. Al Qaeda now is possibly stronger than it’s ever been. It’s not on the run now, unlike in 2008 when, in middle of a war, it really was on the run from Anbar.

It must be that darn YouTube video causing so many problems. What else could it be?

And the doctor who helped get Osama sits in a Pakistan prison.

Just give me back Walter Cronkite and some hypnotic quaaludes … and all will be fine. Who are these young whippersnappers saying we should listen to anything other than “main stream” media?

Just because our president audaciously lies to us completely, about just about every important thing, is no excuse for waking me from my comfortable sleep. Yes yes yes .. he was raised by communists that want to destroy US … but he is an articulate black man and it would be uncomfortable to accuse him of malice … leave me alone, and let me eat my waffle.

All is proceeding as Obama intended. Nothing to see here, folks. Move along.