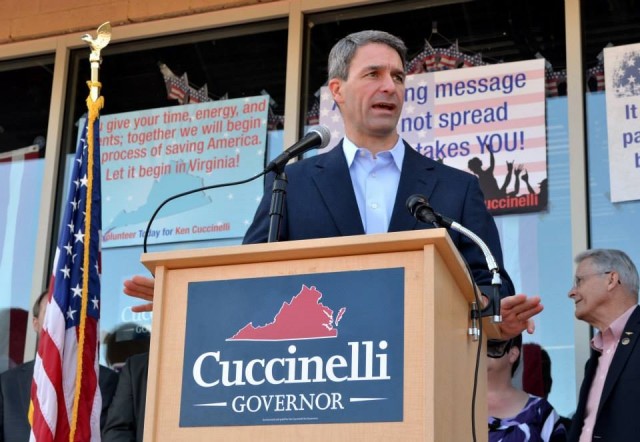 With less than two weeks to go before the Virginia gubernatorial election, candidates Terry McAuliffe and Ken Cuccinelli (aka Sauron and SpongeBob Squarepants) are each receiving campaign support from some pretty well-known political figures.

On Saturday, former Secretary of State Hillary Clinton offered a “rousing endorsement” to an audience in Falls Church, Virginia for Democrat candidate Terry McAuliffe. (Whom some in Virginia have branded “Terry McAwful”)

Meanwhile, Rick Santorum is on team Cuccinelli. His PAC,  Patriot Voices, is calling for volunteers to “Join our Strikeforce and help Ken Cuccinelli become the next Governor of Virginia!”

Cuccinelli will certainly need all of the help he can get from these volunteers. According to the latest polling data, McAuliffe now leads Cuccinelli by seventeen points. For comparison, back when I initially analyzed the VA gubernatorial situation in mid-September, McAuliffe was only six points ahead.

This large jump in point lead for McAuliffe  may have something to do with the recent federal government shutdown, for which Republicans are being blamed. The shutdown hit Virginia harder than any other state, and resulted in numerous residents of Northern Virginia being furloughed, reports the Richmond Times Dispatch.

“This large jump in point lead for McAuliffe may have something to do with the recent federal government shutdown, for which Republicans are being blamed. ”

The large jump has to do with the Failed Operatives Cuccinelli has chosen to associate himself with from the beginning. DC hacks who are losers. He has gone Full Establishment with his consultant class.

1. When will donors stop giving to these incompetent consultants?

2. When will candidates stop hiring these incompetent consultants?

Seriously, would you hire a contractor to replace your roof who had done your neighbor’s roof – and left it full of leaks? So why would you hire consultants who do nothing but lose … and collect your money while doing so?