Reince Preibus declares “self-deportation” racist, but that policy was in the Republican Party platform just last year and the term used by Mitt Romney

Update:  Big Oops – Business Insider says Reince Preibus did not say self-deportation “racist”.  See new post as to how RNC Press Office had confirmed the quote was accurate, but now says word was “hurts us” not “racist.”

Two connected events which make me want to scream.

First, Ken Cuccinelli is bemoaning the fact that the conservative/Tea Party base is not enthusiastic this election cycle, via Washington Examiner:

Virginia Republican gubernatorial nominee Ken Cuccinelli said Thursday that he’s worried enthusiasm among conservative activists — his most ardent supporters — has dissipated just as he’s preparing for the final months of a high-stakes election.

In an interview with conservative media outlet Newsmax, Cuccinelli said the Tea Party is “worn out or depressed” in parts of Virginia and that it’s having an effect on his campaign.

“In some parts of Virginia, the Tea Party has been not quite staying home, but pretty close to it,” Cuccinelli said. “That’s a problem when principle-based voters won’t come out to volunteer.”

If Cuccinelli is having problems with enthusiasm, that tells you how bad the situation is.

Second, Reince Preibus announced yesterday at the RNC convention in Boston that use of the term “self-deportation” was racist, via Business Insider (emphasis added): 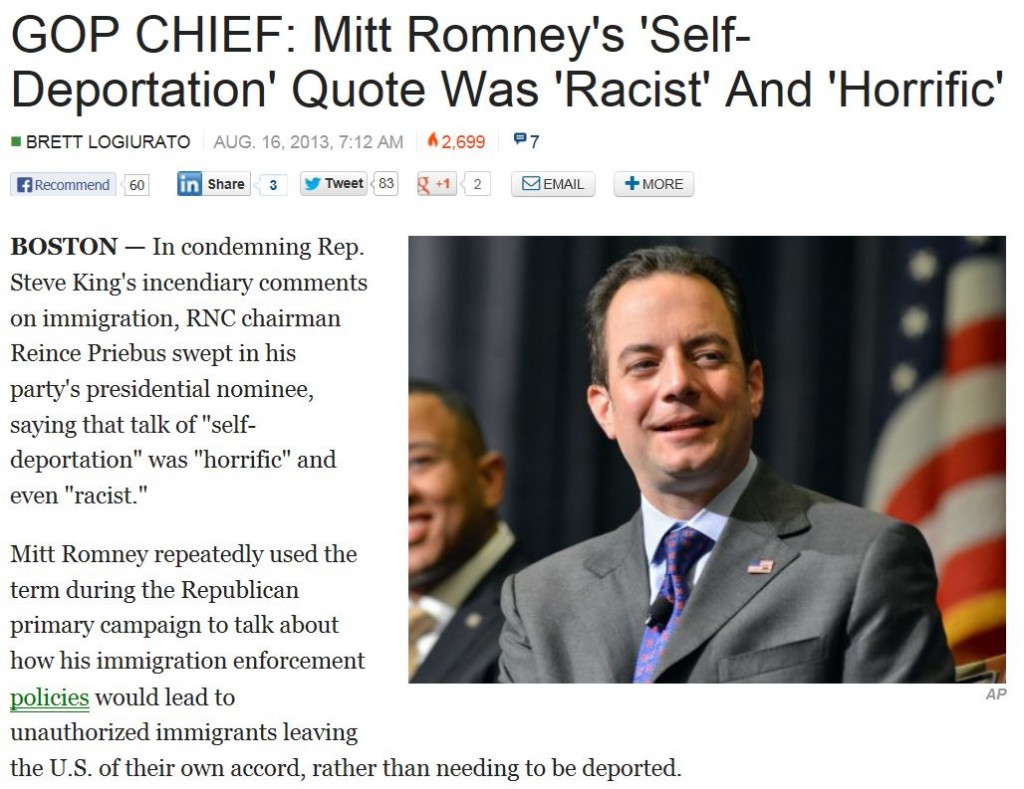 In condemning Rep. Steve King’s incendiary comments on immigration, RNC chairman Reince Priebus swept in his party’s presidential nominee, saying that talk of “self-deportation” was “horrific” and even “racist.”

Mitt Romney repeatedly used the term during the Republican primary campaign to talk about how his immigration enforcement policies would lead to unauthorized immigrants leaving the U.S. of their own accord, rather than needing to be deported.

“Using the word ‘self-deportation’ — it’s a horrific comment to make,” Priebus said, in a forceful rebuke. “I don’t think it has anything to do with our party. When someone makes those comments, obviously, it’s racist.”

The RNC press office has confirmed to me that the Business Insider quote was accurate.

Left-wing commentators like Steve Benen at Maddow Blog are all over it and shoving the RNC’s prior position on self-deportation down Preibus’s throat:

It’s certainly welcome news that the chair of the RNC considers “self-deportation” horrific and racist, but it also comes as quite a surprise. As recently as a year ago, Priebus helped oversee the completion of his party’s national platform, and guess what it said on immigration? “Republican delegates hammered out an immigration plank calling for tough border enforcement and opposing ‘any forms of amnesty’ for illegal immigrants, instead endorsing ‘humane procedures to encourage illegal aliens to return home voluntarily,’ a policy of self-deportation.”

That’s right, it takes a certain kind of marketing genius to declare your own party’s platform from just a year ago “racist”:

Here’s the language from the 2012 party platform:

We will create humane procedures to encourage illegal aliens to return home voluntarily, while enforcing the law against those who overstay their visas.

All the usual suspects are having a field day:

This is absurdity cubed.

“Self-deportation” merely is the reality that as programs such as E-Verify and other enforcement tools for existing laws are made more effective, there will be less incentive for people in the country illegally to stay as jobs dry up — the same effect the poor job market in general has had on net illegal immigration.  This leads to the logical conclusion that in order to solve the illegal immigration problem we don’t need an incomprehensible “comprehensive immigration reform” bill, we just need to enforce existing laws and perhaps make more rational the existing visa system.

There’s nothing pejorative or racist about the concept of or the term self-deportation.  Another word for it is “law enforcement.”

In this headlong, mindless immigration political correctness rush, the RNC is just playing into the word games of Colorlines and other groups which seek to shape immigration policy by calling perfectly race-neutral terms like “illegal immigrant” racist.

The RNC now has adopted the linguistic race-card politics of the left.

Thanks for nothing.  And don’t be surprised when conservatives and Tea Party activists self-deport themselves out actively supporting the Republican Party.

In case someone somehow reads this thread before the LI followup….

I’ve always thought going third party was suicide. And still do. But I also agree with Angelo Codevilla that it’s not rational to expect tens of millions of voters to keep voting for a party that does not govern according to the principles and values it purports to hold. Codevilla basically said in February that the establishment has ruined the party – leaving Tea Party constitutional conservatives “orphans” without a party. And that can’t last.

“OK, here are two pairs of shoes. Pick one.”

“Um, neither pair is my size.”

“Those are your choices. Pick one.”

“How? I have zero use for either.”

Sorry Henry, that won’t happen. The Establishment will continue to attack their only hope, The Tea Party.
I voted for the lesser-of-two-evils with that pussy mitts and that’s all The Establishment has to offer…and here comes jeb

Business Insider isn’t a business news site as the name implies, you would be hard pressed to find a worse source for business news and there is NO “inside information” there, EVER.

It’s a leftist news site funded by Bezos, who just bought WaPo to keep it afloat.

A few months back, Wiesenthal objected to the proposition that the money “created” by the Fed’s “asset purchases” would have to be repaid at some point. He hasn’t a clue how any of it works, he is just there to spread leftist agit-prop.