Larry Sabato came out with his rankings of presidential contenders today.

I was going to write about the downgrade of Marco Rubio, but that’s old news.

More interesting is the rankings of Democrats. There is no “First Tier” other than Hillary. The drop from Hillary to Joe Biden is dramatic, and then comes the Third Tier of (don’t say I didn’t warn you) Elizabeth Warren and Andrew Cuomo.

By comparison, the Republican bench is deeeeeeep.

For Democrats to have a strong shot of winning in 2016, Hillary must run. It’s that simple.

And it’s why we’ve never underestimated the likelihood of Elizabeth Warren getting in the race if Hillary doesn’t. 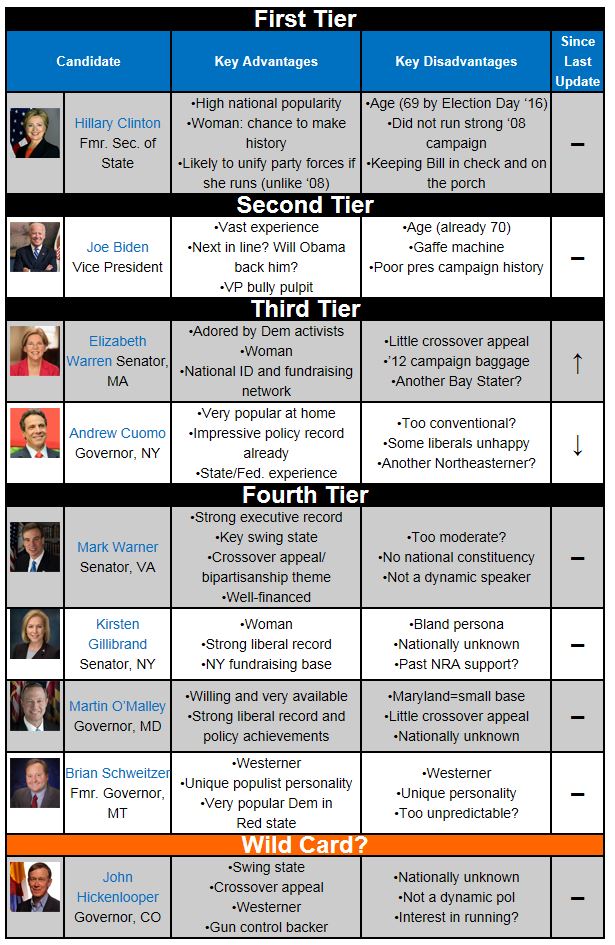 Hillary is a lazy journalist’s story. Cause any editor that gets handed this topic “Hillary in a landslide in 2016” … can pay his mortgage. And, doesn’t have to worry too much about accuracy.

I mean, how can you “accurately” predict anything?

Maybe, we will have a storm named Hillary? So far, the Atlantic is up to using the letter “e.”

Kerry has the nomination in his pocket. Doesn’t want this information forecast, though. That’s not how you get things done in DC.

Not only is Hillary unelectable … she really has no money friends. And, she’s not particularly liked among democrats. Bill, however, always makes good copy.

Hence, the connection of Hillary to being a potential candidate.

Meanwhile, the republicans don’t pay any attention to the corrosive nature of their own party. Mitch McConnell doesn’t have the powers that Harry Reid has, with one hand tied behind his back.

The current GOP leadership worries about losing their House majority, about not winning a Senate majority, not winning the White House in 2016, and are designing yet another milquetoast, offend no one, hope for the best campaign ‘strategy’. All the while, what is truly at risk is the very party itself. The GOP leadership is crawling and groveling towards extinction.

The current GOP leadership simply will not fight. Their selfishness renders them gutless. They represent no one but themselves and seek only to maintain office and insider status. They are well described by Michael Walsh as “the lesser half of the Permanent Bipartisan Fusion Government, content to munch its cud and occasionally low in the direction of constitutional propriety, and then resume its own modest but lucrative role in fertilizing the ‘two-party’ system.”

In 2016, we need to flip the equation – nominate a conservative and it’s the GOP moderates who can suck it up. We may go down, but at least we’ll go down fighting. McCain and Romney both infamously refused to fight the necessary dirty fight. In effect, it’s the same as taking a dive.

I am a conservative, not a Republican, and never has there been greater distance and distinction between the two.

Tom Coburn, a republican from Oklahoma. Was in the House. And, has since moved into the senate. He’s talking to Mark Leibovich, who recorded this comment in his excellent book, THIS TOWN:

“Coburn never made it to Russert’s funeral. He doesn’t go to those kinds of things. “Sounded like a scene,” he said. Coburn compares Washington to a “parasitism.”

“It is one parasite feeding off another parasite feeding off another parasite,” he says. The reason you attach yourself to someone else is so you can gain something yourself. Parasites don’t attack our intestines because they like the environment. That’s just the milieu in which they advance their livelihood. That might sound a little harsh. But in Washington if you can’t be connected, you can’t gain anything.”

Leibovich, in his excellent story telling shows you why politicians are more alike (with each other), than you’d think they’d be if you were sorting stuff by party labels.

To repeat this, again: Hillary didn’t make friends during her sojourn in the senate. She’s a parasite attached to her husband, Bill. She’s unelectable on her own.

Oh, yeah. Thin Huma will carry Hillary around the room on her shoulders! (Would beat Tuffy’s clown act, fer sher.)

What?! How are you leaving Michelle out of the picture? Isn’t it obvious that she intends to run? Of course things may change between now and then, but right now I can’t see anything that would stop her.

MSM will choose the Republican nominee.

You know, that “moderate”…the ONLY one with “electability”.

Republicans always dust off their white washed checker board when they get invited to an international chess tournament.