With all the efforts to tie the Tea Party and “right wing” to violence committed by others, it wouldn’t be long before the Islamic radical Boston bomber Tamerlan Tsarnaev was tied to “right-wing” causes.

With the slenderest of proof, The BBC goes there:

One of the brothers suspected of carrying out the Boston bombings was in possession of right-wing American literature in the run-up to the attack, BBC Panorama has learnt. 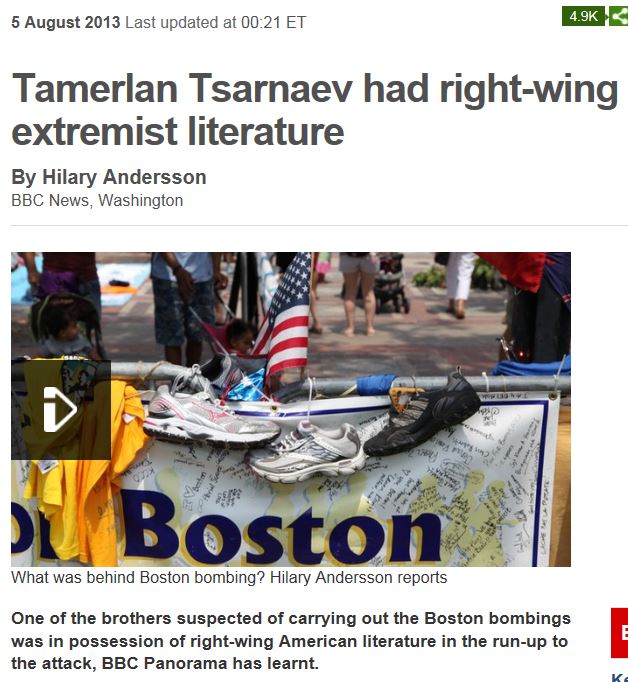 So, what was this supposed “right-wing” literature? Was Tamerlan reading about lower taxes and federalism, more restriction of federal versus state government? About shrinking entitlements or stopping the growth of the welfare state? About the deficit? Reversing Roe v. Wade?

No. Here’s the BBC’s list of Tamerlane’s supposed right-wing causes:

He also had reading material on mass killings…

The programme discovered that Tamerlan Tsarnaev possessed articles which argued that both 9/11 and the 1995 Oklahoma City bombing were government conspiracies.

Another in his possession was about “the rape of our gun rights”.

Reading material he had about white supremacy commented that “Hitler had a point”.

Tamerlan Tsarnaev also had literature which explored what motivated mass killings and noted how the perpetrators murdered and maimed calmly.

There was also material about US drones killing civilians, and about the plight of those still imprisoned in Guantanamo Bay.

Let’s take them one by one.

—White supremacy is neither of left or right, it is racism which is not espoused by the mainstream of either side today but has been used by both sides in the past. As for Hitler, few on the left ever acknowledge (or ever will) that Hitler was a socialist, but the evidence is quite compelling, although for the most part the left has been dedicated to suppressing it.

—Do most criminal mass killers have political motivations that involve either left or right? Aren’t they far more likely to have been moved by private demons? And among politically-motivated mass murderers, although I’ve not seen a study, my impression is that the left is very well-represented indeed. As for government-perpetrated mass killings (the source of the vast majority of such mass deaths), they have been far more connected to the left than the right from the rise of Communism on. Pol Pot, Stalin, anyone? Even the BBC would be hard-pressed to say they weren’t men of the left, although knowing the BBC they just might give it a go.

As for other mass killers such as, for example, Islamic terrorists (can’t imagine why that would come to mind in a discussion of Tamerlan Tsarnaev), there’s nothing right-wing about their motivations, unless you consider all religious fundamentalism to be of the right. But it’s almost solely the left that supports Muslim fanatics, allies with their cause, and makes excuses for their murders.

—9/11 and Oklahoma truthers? There’s not much data on the latter that I can find, but national polls indicate that 9/11-truthers are far more likely to be on the left side of the political fence than from the right. “Government conspiracy theories” are hardly the sole province of the right, to say the least.

—Now we get to the sole point of view on the list that could properly be called “right-wing”: gun rights. But if someone like Tsarnaev is reading about that issue, it doesn’t tell us anything about his politics in general. He was contemplating murder, for heaven’s sake, and interested in getting greater access to weapons (and by the way, Tsarnaev had most likely committed a previous multiple murder of great brutality, although the mode of killing was knife rather than gun).

—Learning about how mass killers work? That’s about the psychology of murder, not about left or right.

—The final item in the list, material about “US drones killing civilians, and about the plight of those still imprisoned in Guantanamo Bay” are primarily concerns of the left rather than right. Even Obama has drawn criticism from the left for using too many drones and for not fulfilling his campaign promise to close down Guantanamo. These are leftist causes, although some libertarians get into the act too in that interesting area where right and left come full circle and meet.

This isn’t about literature in Tamerlan’s possession.  It’s about the BBC whitewashing his radical Islam connection, even though that connection was the clear motivation, and replacing it with a deceptive tie to the right.

The Left see themselves as gentle doves while they consider everyone else to be an aggressor except, of course, if the aggressor is a radical Islamist, a union member, a homosexual bully or the like. These aggressors, we are told by the Left, have their ‘rights” to fight (riot, destroy, maim, kill, etc.) anyone who disagrees with them.

Some leftists even sympathized with the 9/11 WTC hijacker/murderers and they sympathize with ‘Major’ Hasan, the Ft. Hood murderer.

Yet they call George Zimmerman a murderer.

And Trayvon a saint.

Proof that they have their heads charged to an alternate current that detaches them from reality and plain evidence.

And so it should not surprise anyone that some of the youth on the left are seeing at least the younger brother as the handsome, but troubled, impressionable youth, that have proven to be a mainstay of female desire for years, as evidenced by the record sales of that issue of Rolling Stones with his picture on the front.

neo-neocon: White supremacy is neither of left or right

With this in mind, white supremacy is clearly a right wing ideology.

neo-neocon: As for Hitler, few on the left ever acknowledge (or ever will) that Hitler was a socialist

Hitler advocated for a hierarchical society with an absolute leader, along with a theory of superior races and nationalities. Of note, Nazism was considered right wing at the time, and during the intervening generations, as well.

The Routledge companion to fascism and the far right, Paul Davies.

The Culture of Fascism: Visions of the Far Right in Britain, edited by Gottlieb & Linehan.

Fascism Past and Present, West and East: An International Debate on Concepts and Cases in the Comparative Study of the Extreme Right, Griffin et al.

France in The Era of Fascism: Essays on the French Authoritarian Right, edited by Jenkins.

Fascism and Neofascism: Critical Writings on the Radical Right in Europe (Studies in European Culture and History), edited by Weitz & Fenner.

neo-neocon: Do most criminal mass killers have political motivations that involve either left or right?

Mass murder is a means, not an ideology. It’s a result of extremism, where the ends are used to justify the means. It’s the ends that define the political ideology.

neo-neocon: And among politically-motivated mass murderers, although I’ve not seen a study, my impression is that the left is very well-represented indeed.

neo-neocon: unless you consider all religious fundamentalism to be of the right.

Religious fundamentalism is on the right.

neo-neocon: “Government conspiracy theories” are hardly the sole province of the right, to say the least.

Except that since “right-wing” generally means nationalist, it depends WHOSE right-wing. Love of Hitler shows loyalty to Islam, where this stuff is in, not the US.

mzk: Except that since “right-wing” generally means nationalist, …

mzk: Love of Hitler shows loyalty to Islam, where this stuff is in, not the US.

Not sure what that means. However, nationalism is certainly prevalent on the American right.

Nice straw man you got there. Be a shame if sumthin’ should happen to it.

“liberal as supporting equality AND liberty.”

Uuhuh. Like ol’Ben Franklin said about that:”Democracy(ie-“Equality”)is 2-wolves and a sheep sitting down to supper. Liberty is the sheep coming fully armed and ready to contest the meal.”

NeoConScum: Uuhuh. Like ol’Ben Franklin said about that:”Democracy(ie-”Equality”)is 2-wolves and a sheep sitting down to supper. Liberty is the sheep coming fully armed and ready to contest the meal.”

The attribution of the quote is most certainly not Ben Franklin. In any case, that’s the idea of liberalism, a balance between the values of equality and liberty, which are often in conflict.

“The left is conventionally defined as advocacy of greater social equality; the right as supporting social hierarchies; liberal as supporting equality and liberty; and conservative as supporting established institutions.”

It’s good — for your own spirit as well as for the human cause — that you have finally admitted that the Obama regime and its supported as fascists.

Not sure how you decided that, but it sounds like silly hyperbole.

fascism, a political philosophy, movement, or regime (as that of the Fascisti) that exalts nation and often race above the individual and that stands for a centralized autocratic government headed by a dictatorial leader, severe economic and social regimentation, and forcible suppression of opposition
http://www.merriam-webster.com/dictionary/fascism

There is a report that the some of the papers that are shown in the BBC’s story were not published until days after the incident.
Might have someone done some creative article writing and editing?

More to he point, the Arab world is well known to be in love with the Nazis. Mein Kampf sells well. “Saint” Anwar el-Sadat’s ode to Hitler is also quite well known.

The problem is a lot deeper than Islam. The entire Arab world could go secular tomorrow, and we would still have a problem.

If wings could be sprouted pigs would fly.