In 2005 the Florida legislator enacted statute 776.032. “Immunity from criminal prosecution and civil action for justifiable use of force.” This immunity statute is often erroneously referred to as Florida’s Stand-Your-Ground (SYG) law, even by lawyers, judges, and law professors who ought to know better (MSM journalists I forgive for such errors, as their profession fairly demands ignorance). In fact, SYG is a different statute entirely, 776.013(3). 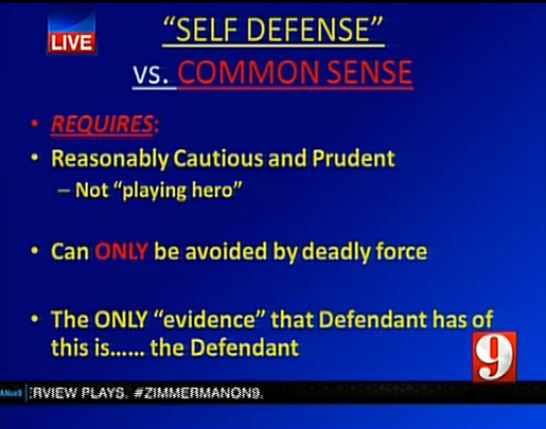 (Slide used by prosecution in Zimmerman trial during closing argument)

Although many states have adopted some form of self-defense immunity law, Florida’s is remarkably broad in many respects. It provides not only immunity from both civil liability and criminal prosecution, but even from arrest in instances that lack probable cause to believe that the use of force was unlawful. In addition, to discourage aggressive plaintiffs who might be willing to “test” the immunity in a civil case, the law provides that the court shall–not may–award the defendant his attorney’s fees, court costs, and even compensation for loss of income, if the defendant’s immunity is affirmed at trial.

What the statute failed to address, however, was how it was actually to be applied, and by what standards. This task was necessarily to be undertaken by the various courts as self-defense immunity claims were presented to them.

Of course, give two courts the chance to interpret any statute and you’re likely to end up with twenty different conclusions. In Florida that’s exactly the mess that had developed by the time the state supreme court stepped in to clear things up in 2010. It did so by considering two appellate court decisions that had taken opposing approaches to interpreting and applying the self-defense immunity law.

Dennis v. State (4th DCA):  No Immunity If There Exists Any Dispute of Fact

The more recent of these appellate court decisions was Dennis v. State, 17 So.3d 305 (2009), a product of the 4th District Court of Appeals.

Dennis had been charged with attempted first-degree murder of his girlfriend, and he tried to use the self-defense immunity law to have the charges dismissed. Dennis made two pre-trial arguments for why the immunity law should result in the dismissal of the charges against him. First, that there were no material facts in dispute, and the facts that existed failed to establish a prima facie case of guilt–the standard under Florida’s criminal procedure rule 3.190(c)4). Second, that the preponderance of the evidence before the court supported his claim of justifiable self-defense, thus triggering the immunity law–the standard under Florida’s criminal procedure rule of 3.190(c)(3).

The trial court rejected the first argument on the reasonable enough basis that the State prosecutors were, in fact, asserting with specificity the existence of disputed material facts. On the second argument the trial court decided that if an evidentiary hearing was required–and it would be, to establish a preponderance of the evidence–then the matter was properly left to the finders of fact, the jury, so again the claim for immunity was rejected.

Dennis was ultimate convicted on the lesser included charge of felony battery, and sentenced to 5 years. He appealed his conviction to the 4th District Court of Appeals, and raised as an issue the trial court’s rejection of his immunity claims.

The 4th Circuit appellate court handled the issue in an admirably brief single-paragraph decision. In essence, the court decided that a motion for immunity should be dismissed if there exists any disputed of material fact (the 3.190(c)(4) standard applied by the trial court). This decision, however, was immediately acknowledged even by the appellate court itself as conflicting with an appellate court decision from the 1st District Court of Appeals the prior year.

That earlier decision out of the 1st District Court of Appeals, Peterson v. State, 983 So.2d 27 (FL Ct. App. 2008), involved a defendant who had been charged with attempted first degree murder. Peterson sought a pretrial dismissal of the charges based on the state’s self-defense immunity law. The trial court, unlike in Dennis, held an evidentiary hearing on the motion, but ultimately decided that the defendant had not established immunity “as a matter of law.” The trial court also lamented the absence of any established procedure for trial courts to apply the self-defense immunity statue.

Peterson immediately appealed the trial court’s rejection of his immunity claim to the 1st circuit court of appeals. The appellate court rejected the State prosecutor’s argument (later to be successful in Dennis) that immunity must be rejected whenever there is a dispute of material fact. Noting that the Legislature had “intended to establish a true immunity, and not merely an[other] affirmative defense [to be used at trial]” they outlined a procedure for applying the self-defense immunity statute:

We now hold that when immunity under this law is properly raised by a defendant, the trial court must decide the matter by confronting and weighing only factual disputes. The court may not deny a motion simply because factual disputes exist. Here, the trial court did what was required. Petitioner is not precluded from submitting the matter to the jury as an affirmative defense in his criminal trial.

Looking for guidance to Colorado which had adopted a similar immunity provision two decades earlier, the appellate court decided that the Peterson approach was correct in considering the self-defense immunity statute as intending true immunity–and therefore appropriate for pre-trial resolution–and not merely an affirmative defense–and therefore to be left to the jury for decision. Further, the appellate court stated that “we reject any suggestion that the procedure. . . should require denial of a motion [for dismissal of charges based on immunity] whenever a material issue of fact appears.”

As for Peterson himself, however, the appellate court decided that he had, in fact, failed to meet the threshold for immunity under this newly defined procedure and standards.

With these two lower appellate courts taking opposing positions on the proper application of Florida’s self-defense immunity law, the matter was ripe for resolution by the state’s supreme court. They did so by the means of accepting the appeal of Dennis from his unfavorable appellate court ruling, in Dennis v. State, 51 So.3d 456 (FL Supreme Court 2010).

The supreme court in Dennis conducted a detailed and exhaustive analysis too lengthy to repeat in detail here–but the decision can be obtained full-length here: –and comes to a number of key findings.

First, that the plain reading of the self-defense immunity statute reflects an intent by the Legislature to provide release from liability prior to the onset of a trial. Indeed, they note, the statute provides protection even from mere arrest, under the appropriate circumstances. So, the defendant need not wait until trial to raise the claim. Indeed, he may raise immunity pre-trial, and even if he fails there, may raise immunity again at trial.

Second, the plain reading of the statute also makes clear that the grant of immunity from “criminal prosecution” makes the self-defense immunity law substantively more protective than the traditional affirmative defense of self-defense, and that therefore the State must show more than a mere probable cause that the use of force was unlawful. Instead, the correct standard of evidence is that of a preponderance of the evidence.

The result is that the supreme court’s Dennis decision rejects the approach of the lower appellate court Dennis decision, and adopts the Peterson approach as the standard for the application of self-defense immunity claims in Florida.

The bottom line, then, is that in Florida a defendant’s motion for self-defense immunity can be made at any time in a hearing before the relevant court, and the standard of evidence for acknowledging immunity is that of a preponderance of the evidence–if it is more likely than not that the use of defensive force was lawful, immunity attaches.

In the case of George Zimmerman, Mark O’Mara clearly understood this criteria for attaching immunity, and similarly would have been well aware that the facts in evidence overwhelming supported a finding of immunity. His decision to forego the pre-trial immunity (not “Stand-your-Ground”) hearing was strategic, not legal, in nature, and a consequence of the massive disinformation campaign and political wars being waged around the trial.

Unfortunately for the defendant, Dennis, in the supreme court case, they decided that in his particular instance the error was harmless, as even under the correct procedure immunity would have been denied. His conviction for felony battery and his 5 year sentence were left in place. 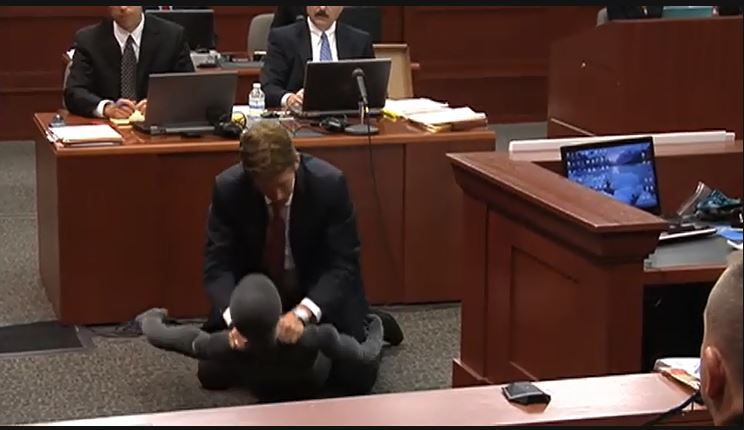 Within the next few days I’ll follow this post with another looking at self-defense immunity provisions across the country, and how they compare and contrast in both procedure and application.

Also, today I had the opportunity to speak with Florida Attorney Eric Roberts, who is currently leading on a case before the 5th District Court of Appeals (the same one that oversaw the Zimmerman trial) in which he is arguing for procedural changes self-defense immunity that will make its application even more favorable to the law-abiding armed citizen. As I learn more about that case over the next few days, I’ll post up about that, as well.

NOTICE: “Law of Self Defense” Seminars are now being scheduled for the fall.

Andrew F. Branca is an MA lawyer and author of the seminal book “The Law of Self Defense,” now available at www.lawofselfdefense.com and also at Amazon.com as either a hardcopy or in Kindle version.

What a lot of non-Floridians don’t know is WHY the SYG laws came into being in the first place. For a long time we had an unwritten policy among some of the SAO’s down here to be critical of people defending themselves. The typical effort you see now.

However, the grand juries had NO problem refusing to indict people for defending themselves and their property. In fact, we had one case where two low-lifes tried to steal a boat motor out of the backyard of a home late a night and got shotgunned for their efforts. The grand jury said, “Shouldn’t steal boat motors from guys who own shotguns!” Shortly thereafter, the law came into being.

It was a result of what the PEOPLE wanted, not the prosecutors as we see in the image of those like Corey.

Good work Andrew. I often send people to this site for an education.

Gee I hope someone is still reading this. In the event that Mr. Zimmerman is sued, my understanding of SCOFLa decision in Dennis is that the trial court would then hold an evidentiary hearing. Since that would probably include all the materials in the criminal case, it would not be long, but can the plaintiffs call George Zimmerman?

Also can the defendants call Corey and BDLR? Specifically to ask them about why they did not present the case to a grand jury. Since they didn’t I believe the defense can argue that they did not because they did not have probable cause, which would be the reason
to call them. TO be honest I just want to see West and OMara examine those two.