John Nolte at Breitbart.com has the background.  The short version is that Kurtz made a factual error regarding whether Jason Collins had disclosed that he previously was engaged and then tried to minimize the error through after-the-fact editing …. and the internet erupted because this was a crime against the hero of the week.

If someone makes a factual error in a column, a correction is in order.  If someone gives a misleading characterization, criticism is warranted.

But the reaction to Kurtz has been so over-the-top that I suspect people who didn’t like him to begin with finally saw an opening big enough to drive an internet truck through.

When it comes to taking down Howard Kurtz, never let a crisis go to waste.

The Daily Beast, I’ve learned, now has retracted Kurtz’s column because it was inaccurate leading to misleading characterizations: 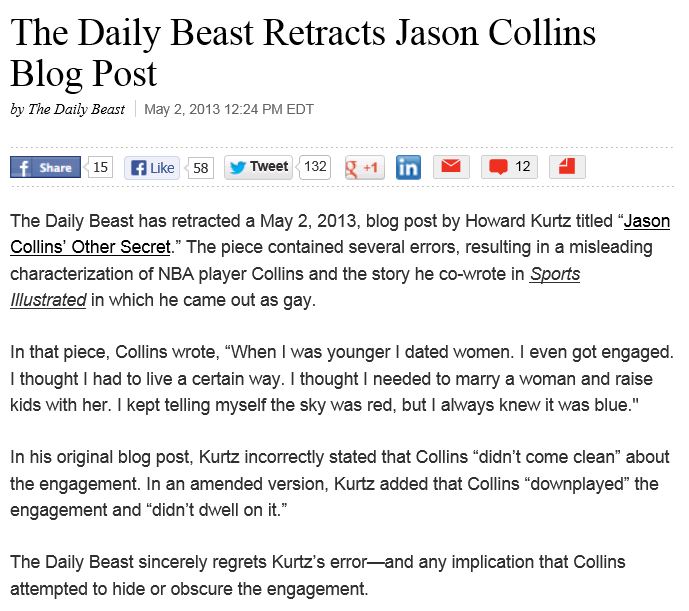 The Daily Beast is the home of Michael Tomasky, and David Frum (he’s been good lately, but he has a history), and Peter Beinart’s Open Zion blog (which has a post today defending anti-Israeli Pinkwash activists).  It’s run by Tina Brown, and includes what’s left of Newsweek.

I’m glad to know The Daily Beast now has a retraction policy for posts which contain errors and misleading characterizations.

This is going to be fun.  To whom do we send future demands for retraction?

Update: There is no sin so great as messing with the hero of the week, unless of course, that hero is a Tea Partier, Republican, conservative, or someone who does not help the narrative — Daily Beast drops Howard Kurtz.

Jason has a straight twin brother. I thought it was a joke, but it isn’t.

greg sargent is a gutless hack. Note that unlike the left I’m not constrained by a meaningless usage of big words to say nothing but none the less impressive to turd polishing gutless hacks who’ve pulled their own weight in life.

My phvrize goes to the ‘ex fiancé’ . Boy she must keep low standards of ‘ personal interaction’ .

Seems. All they had in common was a ball.

But then again she did look like a man.

To err is human, licentiousness breeds deceit. Collins is a man ripened with deceit.