I agree with Zach, nothing to laugh about here, least of all the honesty of the message:

I just recently moved to Denver, CO and captured this shot this afternoon downtown.

I have no witty remarks for this photo. It is simply downright depressing. Best wishes. 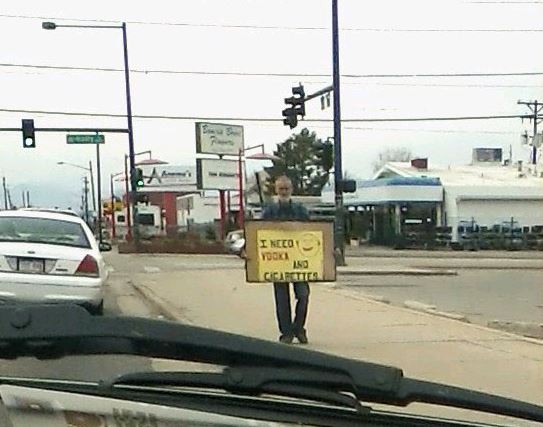 Reading the news every day, I can understand the “need”.

Having worked in Boston for many years I’ve come across a number of both hapless homeless people and professional panhandling hustlers. They are as varied as the rest of the population. You get to know the difference between the two with enough experience.

Several of them stand out in my memory… for the right reasons.

One, I will never forget. God bless her and keep her safe.

Others stand out in my memory… for the wrong reasons. They are survivors with skills I never hope to need to develop.

Honesty is a good policy… I gave money to one guy who was honest enough to hesitatingly admit, after asking him if he was going to buy food with the money he is asking for, that no… he needed liquor because he was an alcoholic and had the shakes.

Truth. A respectful nod to you, our host, and Zach for the compassionate forbearance.

For a certain kind of addict, the will is not overwhelmed by craving; it is bypassed altogether. If such an addict is fortunate, he will experience a psychic shock that gives a breathing space in which to make a serious reach for help.

Hardly anyone becomes a terminal addict without being foolish and selfish at the beginning of the process. The risks of such foolishness and selfishness are much bigger for some people than for others.

Hmmmm. Maybe it’s time for me to do a panhandling mosaic of Austin where such has been a longtime activity.

On thing though, all this activity occurs only in the liberal controlled areas while nary a beggar exists in the nearby conservative ruled municipalities..

It’s unusual to see an ‘honest’ bum. I don’t give any of them money but, if convenient, will buy them a meal if they’re really hungry. That can’t go up their arm or in their nose or wherever one performs unproductive behavior.

We have seasonal panhandlers. Once the overnight temperatures drop, they head south. When the warm weather returns, they come back to hit up the tourists.