This van was heading west towards the beach down Wilshire Boulevard in the Peeps Progressive Republic of Santa Monica, California.

Only kind of bumper sticker mentioning the troops you’ll usually see here on the Westside of L.A. is the disingenuous, “Support Our Troops, Bring Them Home.”

As we know, they don’t want to come home until they feel they’ve finished the job, which this van so beautifully depicts.

I think the stoplight was red when I snapped the picture, like you always remind us, but I can’t really remember, being a bit tipsy as I was. 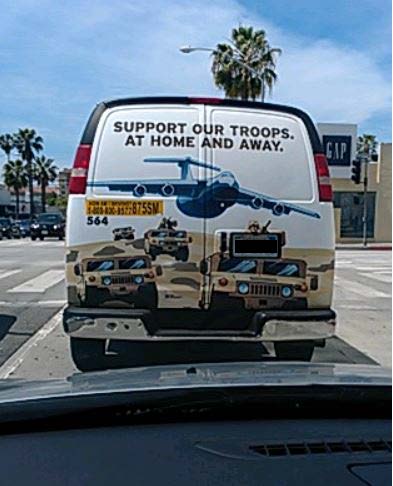 thats a nice one.

hey is that van missing a license plate?
LOL

I felt like the good guys had rolled into town to liberate me from progressive tyranny!

This van was definitely in harm’s way in this neck of the woods.

Of course, it would have met a lot more resistance during the Bush administration.

During the Bush years, a couple of blocks from where we live there is a house on a busy arterial street which had the notorious and famous, “War is Not Healthy for Children and Other Living Things” flower poster set on an artist’s easel on their front lawn for all the passing traffic to see.

It was there on the lawn every day for years.

As a pracical joke and a jab against the anti-war left’s complete hypocrisy—using our troops as a political football … mouthing the phony, “Support Our Troops, Bring Them Home,” line when, speaking of political footballs, yeah, they’re on our team just like Lucy is on Charlie Brown’s team when she swipes the football away—I’d like to make up a slight variation of the poster that says,

“DRONES are Not Healthy for Children and Other Living Things,” and put it on an easel in their front lawn one day.

Have a few hundred or a few thousand progressives driving by have head-on collisions with their hypocrisy one morning before the lefty public art gallery phonies living in that house wake up and discover it.

But I’m so crazy busy these days. And I have so many other pracical jokes I’ve been meaning to play on neighbors.

There just aren’t enough hours in a day!

Anyway, this one is for the troops and our ally forces in Israel fighting the good fight this week.

If my son were in uniform right now, I’d sure as hell rather have Bibi drawing the red lines than an ad-libbing Barack.