The NRA seems to be broadening the issue of gun control into a broader culture war issue.  But it doesn’t seem to be the old religious/moral culture war, it’s more a liberty culture war.

It makes sense from a strategic point of view because it ties into the somewhat libertarian trend among conservatives and definitely Tea Party supporters focused on individual autonomy and self-reliance.  It also puts the purpose of the 2nd Amendment, freedom from tyranny, in a broader social context of an overreaching government.

It’s not just about guns, it’s about liberty. 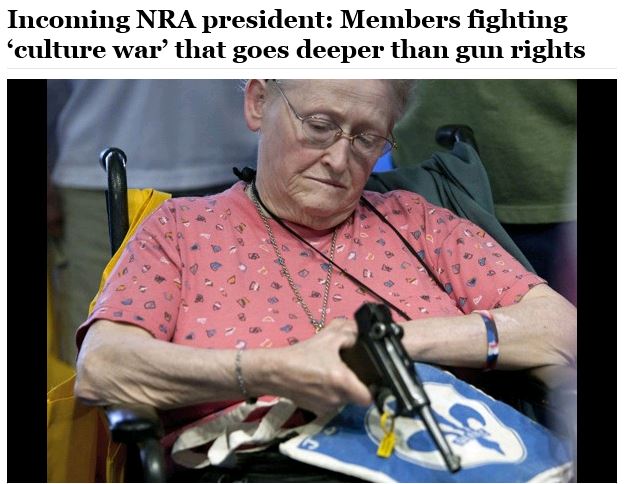 The National Rifle Association kicked off its annual convention Friday with a warning to its members they are engaged in a “culture war” that stretches beyond gun rights, further ramping up emotions surrounding the gun control debate.

NRA First Vice President James Porter, a Birmingham, Ala., attorney who will assume the organization’s presidency Monday, issued a full-throated challenge to President Barack Obama in the wake of a major victory regarding gun control and called on members to dig in for a long fight that will stretch into the 2014 elections.

“This is not a battle about gun rights,” Porter said, calling it “a culture war.”

“(You) here in this room are the fighters for freedom. We are the protectors,” said Porter, whose father was NRA president from 1959-1960.

“It is a cultural fight on those 10 guarantees,” he said, referring to the Bill of Rights in the U.S. Constitution. “Mr. Obama said he wasn’t going after our guns. As soon as the Connecticut thing happened, he came after our guns.”

That theme carried throughout the day and reached a crescendo in a 3 ½-hour political rally punctuated by fiery speeches from state and national conservative leaders.

Sarah Palin’s speech at the NRA convention was well received and hit on those themes:

And we have Wayne LaPierre’s NRA Convention Speech posted as well: