Be cautious about the headline of the day

The Daily Mail has dropped a bombshell which, if true, will blow the Boston Marathon Bombing case wide open.

Interestingly, the author of the article is David Martosko, who recently left The Daily Caller, where he was Executive Editor.

This surely will dominate the news all day, but be cautioned: 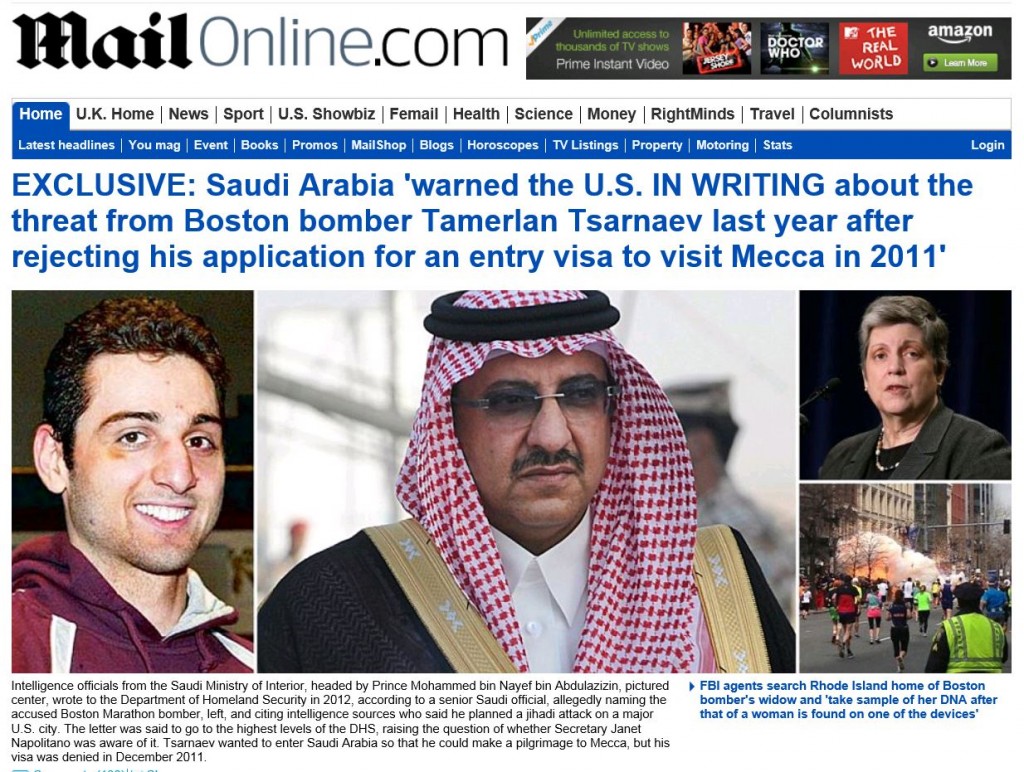 The Kingdom of Saudi Arabia sent a written  warning about accused Boston Marathon bomber Tamerlan Tsarnaev to the U.S.  Department of Homeland Security in 2012, long before pressure-cooker blasts  killed three and injured hundreds, according to a senior Saudi government  official with direct knowledge of the document.

The Saudi warning, the official told  MailOnline, was separate from the multiple red flags raised by Russian  intelligence in 2011, and was based on human intelligence developed  independently in Yemen.

Citing security concerns, the Saudi  government also denied an entry visa to the elder Tsarnaev brother in December  2011, when he hoped to make a pilgrimage to Mecca, the source said. Tsarnaev’s  plans to visit Saudi Arabia have not been previously disclosed….

A DHS official denied, however, that  the  agency received any such warning from Saudi intelligence  about Tamerlan  Tsarnaev.

‘DHS has no knowledge of any communication  from the Saudi government  regarding information on the suspects in the Boston  Marathon Bombing  prior to the attack,’ MailOnline learned from one Homeland  Security  official who declined to be named in this report.

The White House took a similar view. ‘We and  other relevant U.S. government agencies have no record of such a letter being  received,’ said Caitlin  Hayden, a spokesperson for the president’s National  Security Council.

[…] Saudi held in custody and to be deported before Obama met with the Saudi’s? Well today some media shill reported the Saudi’s Warned the U.S. about Boston Bomber’s and some time later a Saudi diplomat, the White House, and DHS all said […]