You may recall my post, Upworthy — or, How we are losing the internet to lowest of low information young liberals:

… I happened upon a website called Upworthy, which had one its posts run at HuffPo, Elizabeth Warren Asks The Most Obvious Question Ever, Stumps A Bunch Of Bank Regulators.

And therein I learned what millions of very low-information young liberals already knew — there is this website called Upworthy which is one giant liberal activist social media machine which creates viral social media memes in the cause of liberal political activism….

The Elizabeth Warren post at Upworthy is a prime example of how low information is combined with a political agenda to create a meme which is based on a lack of understanding, but very, very catchy.

Every once in a while I’ll head over there, and they don’t fail to disappoint, if what you are looking for is over-simplified political memes.

America’s economy could be growing more quickly if we just focused on the right things—like high speed rail, for example. It takes cars off the road, creates thousands of jobs, makes travel easier, etc. One artist decided to draw up his vision of one potential future. We hope people consider it.

This currently is just a designer’s dream. It can become a reality though, if you sign the official White House petition. It needs 100,000 signatures in order to get an official response. 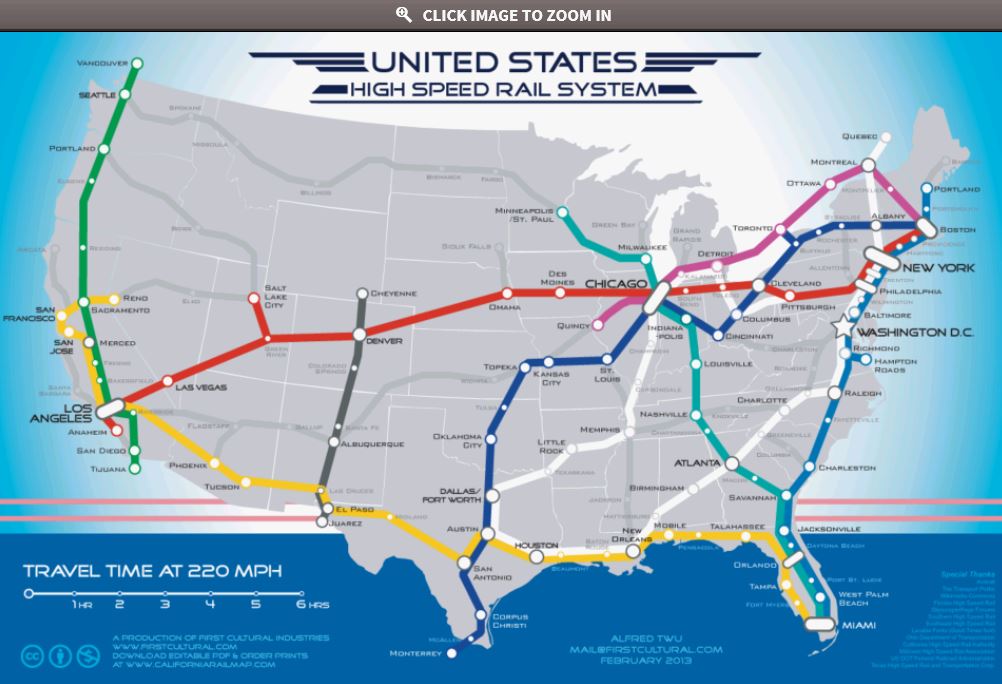 Look at the travel time scale.  First it assumes the train will move at 220 mph — quite a feat.  If you ever have taken the Acela train in the Northeast Corridor you know that this is pie in the sky.  Plus, even at that unobtainable speed, the trip from New York to L.A. would take almost a day of actual travel time — as opposed to a few hours on a plane.  Good luck selling those tickets.

And cost?  We have covered the massive cost overruns and time delays just to build a high speed rail from L.A. to San Francisco.  Imagine that on a national scale.

It’s easy to poke fun at low information voters.  Until you realize how much they cost.

[…] a few posts about the role of the leftist site Upworthy in promulgating memes of both sorts, including a post this past Tuesday on the high cost of low-information voters.  And he’s not the only one to recognize the importance of simple-minded memes for the […]