In the hours following the attack, he said, he had been swamped with concerned phone calls – many coming from Israel – and emails from friend, colleagues and the Foreign Ministry.

“It is a weird feeling to be in Boston and to get worried phone calls from Israel asking if I’m fine,” he said.

At present, Bazak said, police are still investigating the explosions and have not yet determined if it was a terror attack. Nor have police linked it in any way to any group or individual who might also want to target Jews or those connected to Israel, Bazak said.

Hours following a pair of blasts at the Boston Marathon that left 2 dead and up to 100 wounded according to reports, a chief doctor at the hospital where many of the patients are being treated credited Israelis with teaching his team how to respond to such disastrous attacks.

“About two years ago in actual fact we asked the Israelis to come across and they helped us set up our disaster team so that we could respond in this kind of manner,” said Alastair Conn, Chief of Emergency Services at Massachusetts General Hospital, responding to a question about the preparedness of his staff to handle trauma on this scale.

Our thoughts and prayers go out to those impacted by the explosions at the Boston Marathon.

Zvika Bronstein is an Israeli runner who competed at the Boston Marathon yesterday:

The explosions were heard at around three in the afternoon EST (10 pm Israel). “I had just finished the marathon and decided to walk back to the hotel, which was about 2 kilometers away,” said Bronstein. “On the way back I heard a big explosion, but I didn’t connect the sounds to an attack. Only afterwards did I begin to see a lot of police and ambulances arriving at the scene and someone said it was an attack.”

According to Bronstein, “The explosion came from inside a building that was located by the finish line, at the area designated for the crowd of people who had come to watch the runners. The Boston Marathon is the mother of all marathons.” He added, “Not many Israelis come to this marathon, we were in total 16 Israelis here and as far as I know, noone of us were injured.”

Almost w/o exception, those tweeting celebrations in #Israel have turned attention to #BostonMarathon. Another reason I’m proud 2 b Israeli

However not everyone in the Middle East was sympathetic.

The head of an extremist Jordanian Muslim Salafi group says he’s “happy to see the horror in America” after the explosions in Boston.

“American blood isn’t more precious than Muslim blood,” said Mohammad al-Chalabi, who was convicted in an al-Qaeda-linked plot to attack US and other Western diplomatic missions in Jordan in 2003.

I posted a video on YouTube yesterday of the moment of the explosion. It has over 50,000 views as of this writing, and generated many comments from Israelis: 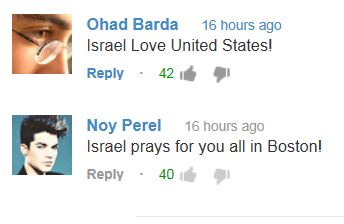 “A chief doctor at the hospital where many of the patients are being treated credited Israelis with teaching his team how to respond to such disastrous attacks..

How could this be? Israel has expienced “disastrous attacks” of this sort? How often? By whom? This is amazing news! How did Israelis come by this kind of knowledge? That’s a total mystery. Will the LSM enlighten us?

Looking at the tweets from Israel, I guess it would be safe to say nobody there was passing out sweets.