“the reason I haven’t written about Mr. Gosnell is the same reason Philadelphia journalists don’t write about homicide trials in Detroit”

The butchery of infants born alive after abortions at the Philadelphia clinic run by Kermit Gosnell is gruesome beyond description, as described in my prior post, A Culture of Death is their choice.

The details are not new.  The horrific Grand Jury Report (h/t Dave Weigel) was issued over two years ago.

Yet this mass murder, reportedly of 100 infants although only seven cases were charged, has been met with near silence by the mainstream media.  Kirsten Powers wrote yesterday:

Infant beheadings. Severed baby feet in jars. A child screaming after it was delivered alive during an abortion procedure. Haven’t heard about these sickening accusations?

It’s not your fault. Since the murder trial of Pennsylvania abortion doctor Kermit Gosnell began March 18, there has been precious little coverage of the case that should be on every news show and front page….

A Lexis-Nexis search shows none of the news shows on the three major national television networks  has mentioned the Gosnell trial in the last three months. The exception is when Wall Street Journal columnist Peggy Noonan hijacked a segment on Meet the Press meant to foment outrage over an anti-abortion rights law in some backward red state.

The Washington Post has not published original reporting on this during the trial and The New York Times saw fit to run one original story on A-17 on the trial’s first day. They’ve been silent ever since, despite headline-worthy testimony.

Let me state the obvious. This should be front page news. When Rush Limbaugh attacked Sandra Fluke, there was non-stop media hysteria….  Yet, accusations of babies having their heads severed — a major human rights story if there ever was one — doesn’t make the cut….

The deafening silence of too much of the media, once a force for justice in America, is a disgrace.

One Legal Insurrection reader took matters into her own hands, contacting her local newspaper, The Detroit Free Press.

The Freep has been nearly silent on the slaughter, running just one story recently about the trial, an April 9 reprint from The Wilmington (DE) News Journal: 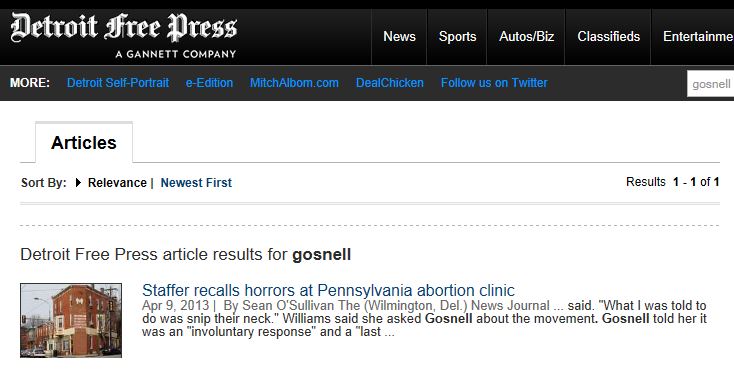 The story linked to other stories about the case at USA Today.  Prior to that, the only recent Freep story I could find about Gosnell was a reprint on March 19 of a USA Today article about the start of the trial.

The reader wrote to the Deputy Editorial Page Editor to complain:

And just where do I find your coverage and column on Kermit Gosnell.

You tend to side with the Progressive view.

Where is your column defending Kermit and his actions.

I suspect this disappoint your desire to confirm a more sinister motive, but I submit to you that the reason I haven’t written about Mr. Gosnell is the same reason Philadelphia journalists don’t write about homicide trials in Detroit.

The reader also wrote to Leonard Pitts, a well-known syndicated columnist who writes for the Miami Herald and whose columns appear in the Detroit Free Press:

Waiting to read your column on Kermit Gosnell.

I am sure your insight would be valued.

I’ve never heard of him.

I would guess you’ve had enough time to Google “Kermit Gosnell”.

When is your article exposing what Kermit did going to be printed?

Or do you approve of Kermit?

Actually, I haven’t Googled anything. I asked you an honest question and waited for an honest answer, which I guess is not forthcoming. I suppose I will look Mr. Gosnell up at some point just to satisfy my own curiosity, but whoever he is and whatever he did, I doubt I’ll write about it at this point. One thing I can’t stand is readers who think they can bait or dare me into writing something in order to prove myself to them.

I reached out last night to both Dickerson and Pitts for comment.  Neither responded.

The slaughter of infants in Philadelphia should be on the front pages of every newspaper, at least as much as the Newtown shooting was.  Just like Newtown and serial killers like Jeffrey Dahmer, the Gosnell bloodbath is not a local story.

While no particular newspaper or columnist is obligated to cover every event, the lack of news coverage, commentary and calls for action across the breadth of the mainstream media regarding the murder of infants born alive after an abortion is startling.

We complain about mainstream media bias.  That bias is not just what they write, but what they ignore.

Part of the legal insurrection is that readers have to demand the mainstream media cover events which are politically incorrect, such as the horror of late term abortion and the killing of infants born alive.

I live in the Detroit area and the Free Press is about as far left as any U.S. Newspaper. Brian Dickson has a long history as a hypocrite.

I suppose that Brian Dickson would use the same justification of it not being “Detroit news” for Newtown as well? Or perhaps, professional sports?

One thing that is true of Pitts and Dickson is that their last names describe them perfectly. And, Charles Blow of the NYT. These people are scam artists posing as reporters.

They are nothing if not vile, hateful wretches. The concept of mercy is lost on them.