“Coming Out As A Conservative On Campus”

“Coming Out As A Conservative On Campus”

Last Monday I appeared as a guest of The Alexander Hamilton Institute for the Study of Western Civilization to give a talk at my alma mater, Hamilton College.

AHI is not affiliated with Hamilton. To the contrary, as discussed here before, Hamilton would not allow AHI on campus after the left-wing faculty who control the school objected, as detailed in my post at College Insurrection, Western Civilization driven off campus at Hamilton College.

Nonetheless, AHI has become a force on campus not only at Hamilton but increasingly elsewhere, through its scholarly activities and student outreach.

My talk was titled “Coming Out As A Conservative On Campus.”

There’s a little inside baseball I need to explain for you to fully understand the discussion.

I make reference to Kirkland College, Hamilton’s sister school across the street (literally) from the original Hamilton campus.  Kirkland was founded in 1968 as an all-women “alternative” type of college, with a heavy focus on the arts.  Kirkland and its artsy/hippie girls stood in contrast with the rather staid Hamilton all-male student body and curriculum.  It actually was a wonderful mix.

We always were convinced that “Emily Dickinson College” to which the frat brothers in Animal House made a road trip, wherein a “Fawn Liebowitz” was killed in a kiln explosion, was modeled on Kirkland.  The Kirkland girls loved their clay, too.

Kirkland could not survive financially, and it merged with Hamilton in the fall of 1978, my sophomore year.  Even after Kirkland officially was gone, the Kirkland side of campus retained its identity in practice. A few memories of Kirkland are maintained at the Hamilton website and also at a Kirkland alumnae website.

I also referenced a boycott organized against Jack Greenberg at Harvard Law School, indicating it was a year or two after I graduated. Turns out it was while I was still there, here are some links to the controversy.

Now for the rest of the story.  My apologies for the audio, which was made with a handheld recorder and did not pick up the questions from the audience very well. (Video also here.)

Update 4-5-2013 — The AHI has posted some photos on its website of the post-lecture reception and dinner: 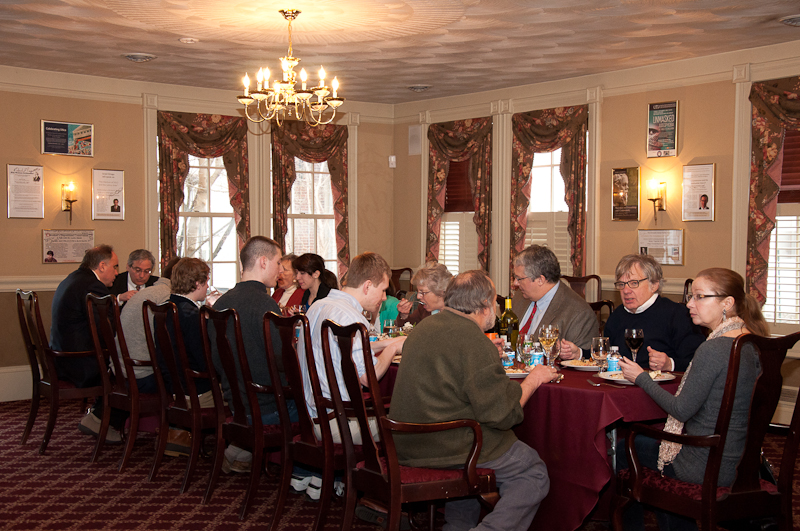 […] “Coming Out As A Conservative On Campus” Last Monday I appeared as a guest of The Alexander Hamilton Institute for the Study of Western Civilization to give a talk at my alma mater, Hamilton College. […]