Most Americans believe that having a gun in the home makes you safer:

During the lock-down of Boston yesterday there was a fair amount of Twitter chatter about whether people in Boston would feel safer if Massachusetts did not have such onerous gun laws.

I just cannot imagine anyone in TN ordering Nashvillians to cower in their homes. We wouldn’t comply. We are armed and unafraid.

That set off some pretty hostile reactions.

Who in Boston is saying “Thank God I’m not allowed to own a gun” right now?

Wow, with a rebuttal like that, I have to concede you’re right about everything RT @awsmcmndo Moron.

But no reactions were more hostile than to this tweet by Arkansas state representative Nate Bell: 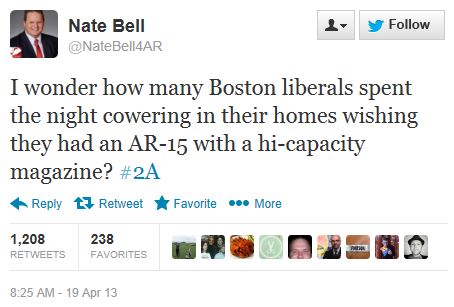 The tweet set off firestorm, leading Bell to delete the tweet (and hence the hundreds of negative reactions).  He later apologized.  (The apology is not deleted.)

I happened to grab the tweet and reaction before it was deleted (embedded below).  It’s worth a read to see the reactions.

One stood out for me.

It was from Gina Mosca of Boston, using the Twitter handle @GinaFly.  It too has been deleted, but I captured it as part of the full twitter stream:

wonder if they know police are not required to protect them per SCOTUS.
catching a lawbreaker is their only real duty.
they don’t have to give a crap about anyone else.

That string of stupidity proves that commiecrats have diseased brains.

Gina Moonbat is educated and wealthy. Translation: educated beyond her own intelligence, and feeding at the trough. I work with lots like her, engineering and science types to boot. The 60’s “question authority” hippies are running the asylum, and there’s no more questioning allowed.

1) Gina is projecting her own desires or defending her own actions;
2)Clearly, if she is “wealthy” and “sleeping fine in her home”, she does not live in Watertown, which is pretty much a working class area.

One wonders why liberals like Gina, safely ensconsed in her gated community, where people are “filtered” before being allowed to move in, deny people that aren’t as wealthy and happy as her, the basic human right to defend themselves.

I can answer that, my friend.

Living in a rural county not far from the Southern Crescent of South Atlanta, I’m keenly aware of the occasional home invasion in my area. These things don’t even bring a casual acknowledgement from our friend, Gina.

But, God forbid(!), some inner-city crack-head would overpower me and make off with my guns and come armed to HER neighborhood (where she now sleeps well with nothing more formidable than her hardbound copy of “Fifty Shades of Grey” in her nightstand)…that fear keeps her awake at night.

She has done the cost/benefit analysis and disarming me, while it leaves a nameless Southern knuckle dragger totally exposed, increases her security by a few parts/million. That’s a risk she’s willing to take.

Therefore, I must be disarmed.

I had no idea that everyone in the Boston area is wealthy, educated and has never been a victim of crime because the police are always there to prevent it. Kudos!