Rand Paul is the civil libertarian hero of progressives, libertarians, and all people who care about the government being able to summarily execute an American on American soil who does not pose a threat of imminent substantial violence without due process of law.

For the past 12 hours Rand Paul has been conducting a speaking filibuster.

Whether you like his economic policies or not, Rand Paul stands for the rule of law.

#StandWithRand is the no. 1 trending topic on Twitter as I write.  The world is watching as Senators and Congressmen of both parties slowly are standing with him.

Against this backdrop, please consider how Paul’s philosophy of limited, constitutional federal government has been demonized by the Southern Poverty Law Center for political purposes.

Amazingly, the SPLC put Paul on a 2011 list of Electoral Extremism: 23 Candidates on the Radical Right:

Americans are generally possessed of an optimism that the democratic electoral process will filter out extremists, radicals and dangerous ideologues. Indeed, there is a temptation to chortle with satisfaction that the number of voters who wrote in neo-Nazi Billy Roper as their 2010 choice for governor of Arkansas wouldn’t fill the seats in an undersized fast-food restaurant….

The Intelligence Report has compiled an accounting of 22 men and one woman with extreme right-wing views who sought public office during the 2010 election season — including five who succeeded. Those who won their races are marked “elected.” 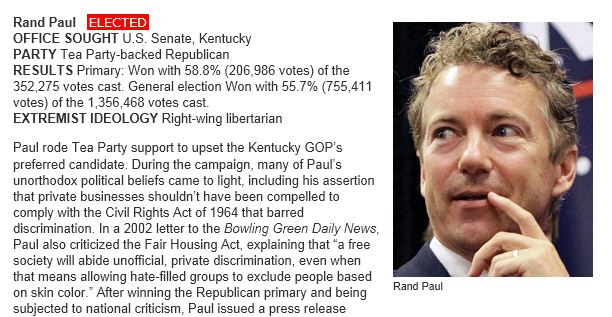 Must say, wouldn’t bother me if a drone discharged it’s load on the SPLC and that ugly creep Dees.

SPLC is a joke, has been a joke for a good five years or more.