Sarah Palin once again proved that her political instincts far surpassed those of the Republican political establishment, which long has accepted Don Young, Alaska’s lone Congressman.

Elected in 1973, Young has come to epitomize what is wrong with Washington, with questionable use of campaign funds and cronyism.

Young’s statement yesterday calling farm workers “wetbacks” has generated a lot of controversy, as it should.  I’m usually the last person to jump on the bandwagon, but Young is a relic who needed to go even before that comment, and more so now.

Palin saw the problem back in 2008, and stunned the Republican political  establishment by backing a challenge to Young:

“For too long, we have expected too little from our elected officials,” Parnell said. “It is time for change.” ….

With Gov. Sarah Palin at his side, Parnell later Friday filed his official paperwork at the state elections office in Anchorage. 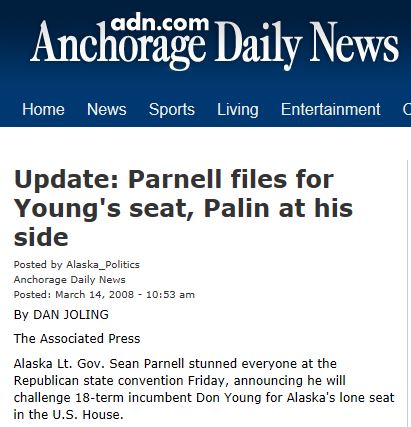 Young held back the challenge by a few hundred votes:

Looks like someone else may be going rogue, too:

So has anyone bothered to note that Don Young is a moderate Republican big spender — exactly the kind we're told we're lacking in DC?

@jonahnro Are you going rogue?

Well, Sarah Palin did take on Don Young crowd in Alaska. Never got enough credit for it RT @leginsurrection Are you going rogue?

“Never got enought credit for it” She’s has an amazing record of being right, from Murkowsky on down, and never got credit for it. God help the left [or actually, don’t help the left] if the establishment actually started backing her.

The RINO establishment’s relation to her is one of the best reasons for the Tea Party to become independent of them.

Those “wetbacks” wouldn’t be here illegally if we had a reasonable immigration law that includes a guest worker program. Some people come here just to work. Many of them send money home. The money they send home to those rancid 3rd-world countries to the south of us should be regarded as a kind of legitimate, superbly targeted foreign aid, because that is exactly how it functions.

If we let them come, work, and go home, we will be sending Americans back to the places they are needed most. Imagine sending 10 or 20 thousand men in their 40s and 50s back to Venezuela, with a little bit of money.

No, Valerie. The various assortment of illegal aliens would not be here illegally if we upheld the existing immigration laws and deported as we found, at their country’s expense. If we deported them from schools, from assorted job, from housing, and fined the schools and employers that educate and hire them at the American taxpayer’s expense, we wouldn’t have a problem. If we cut off foreign aid of any type to countries with illegals in our country, we wouldn’t have a problem. If we decided that we are the one to say who will come into our country, we would have no problem

It is not America’s job to make sure that Venezuela’s or Mexico’s or any other country’s economy functions.

Ditto that. And ESPECIALLY via a mechanism the involves breaking our laws and violating our sovereignty.

No other nation in the world permits this…and ESPECIALLY not Mexico.

Which, btw, has LOWER unemployment and a better growth rate than does the US at present.

So, which is the 3rd world country under Obama?

Shortly after the Pope was elected, I saw an interview (CNN, I think), with a member of the Church hierarchy. The interviewers was determined to pin down if the Pope was conservative or liberal, and listed what he thought were “conservative” doctrine; i.e. gay marriage, women priests, celibacy, all the “push button” issues so very dear to “modern” Americans that would just looove to become church going Catholics if not for the backwards thinking from Rome.

I bring this up because his answer reminds me of Palin, and why “conservatives” always lose the debate.

His answer: We do not view these issues as liberal and conservative. We view them as right and wrong.”

Aside: I lived in the Arizona desert in the ’80’s, and “wetback” was a term Mexicans used to identify the Mexicans that had just crossed the desert into America. It wasn’t a pejorative until the liberals made it one.

We do not view these issues as liberal and conservative. We view them as right and wrong.

An awesome statement which gets to the heart of why liberals are the way they are – they are afraid to identify any behavior as right or wrong (good or evil). IOW, they have only one value: the acquisition of power over others.

I never saw Democrats turn on Gus Savage, Maxine Waters, Cynthia McKinney, Charlie Wrangel, etc., etc. They know that when it is all said and done being a Democrat is more important than being right.

Hmm. Somebody at NRO, besides Steyn, thinks Palin is right? WHat’s happening over there?