The New York Times, the American Council for Judaism and Israel

Whatever complicated personal themes may have floated in Arthur Hays Sulzberger’s private seas can only be guessed at. (The most common — and plausible — speculation is that he, like many established and wealthy American Jews of German heritage, was profoundly uncomfortable, or simply snobbish, about the more recent waves of Jewish immigrants from Eastern Europe who were seen by them as less cultured.)
So, while downplaying in The Times to a ludicrous degree the Jewish identity of the victims of some Nazi horrors (an editorial about the Warsaw Ghetto uprising
somehow managed to omit that it was a ghetto of Jews), Arthur and Iphigene worked diligently to help distant relatives still in Germany emigrate to the United
States. They surely understood these people were in danger from Hitler because of something more than their “choice” to subscribe to the Jewish, rather than say, the Lutheran, religion.
But it was out of this tradition that Arthur Hays Sulzberger positioned himself as an avid anti-Zionist even going so far to make speeches on the subject. He consistently opposed proposals ranging from the modest, like the (never realized) raising of an international Jewish military force, to the grand, the founding of a Jewish nation – state in the Middle East.

(Lewis’s description of “an international Jewish military force” as “modest” is curious.)

Lewis quotes Laurel Leff’s “Buried by the Times” favorably. Leff’s book documents how the New York Times covered (or didn’t cover) the Holocaust. Indeed Lewis is rather critical of the failure of the paper to give proper coverage to the Holocaust. However, Lewis seems less bothered by Sulzberger’s anti-Zionism.

In this interview, Leff argues that the Sulzberger’s anti-Zionism affected the paper’s coverage of the Holocaust and the founding of Israel:

Groner: One of the notable conclusions that struck me about your book was how strongly committed Arthur Hays Sulzberger was to the anti-Zionist credo that became associated with the American Council for Judaism. You provide meticulous documentation for the conclusion that Sulzberger was not merely a non-Zionist but was actively opposed to the creation of a Jewish state, and was even opposed to establishing Palestine as a refuge for hundreds of thousands of Jews trapped in Nazi-occupied Europe. Did those findings provide a major foundation for your thesis that the Times intentionally downplayed the news of the Holocaust as the news came in?
Leff: Yes, it did. Going into the project, I had assumed that Sulzberger was a fairly typical assimilationist German Jew, meaning that he acknowledged he was Jewish but had only the most tenuous connections to the religion and to the community. It was only when I started poking around in Rabbi Abba Hillel Silver’s papers, a copy of which are at Yale University, that I realized how deeply Sulzberger was involved in the fight against a Jewish state. Silver led several Zionist organizations during World War II. In Silver’s papers I found minutes of meetings where Jewish officials plotted to combat the Times’ anti-Zionism, as well as its downplaying of incidents such as the sinking of the Sturma. (Having been refused admission to Palestine, the unseaworthy boat sank, killing all but one of the 768 refugees aboard.)
Even more surprising, I found evidence that Sulzberger was actively engaged in the fight both publicly—making speeches, publishing letters in Jewish publications, writing widely circulated, angry letters—and privately, by lobbying U.S. and British officials and keeping a close watch on the Times’ news coverage. This contradicted not only my assumption that Sulzberger had no ties to the Jewish community, but also that, as publisher, Sulzberger didn’t involve himself in partisan causes or in the news side of the business.
…
That led me to explore his and his family’s Jewish background, his relationships with Jewish groups, including the American Council for Judaism and Rabbi Stephen Wise’s World Jewish Congress, his connections to other prominent Jews such as Felix Frankfurter and Henry Morgenthau, and his correspondence with U.S. government officials, including Cordell Hull and Sumner Welles. As a result, I concluded that his attitude toward Judaism, including his anti-Zionist orientation, affected his and his newspaper’s approach to reporting and editorializing on the ongoing destruction of European Jewry.

The American Council for Judaism was against the founding of the state of Israel. 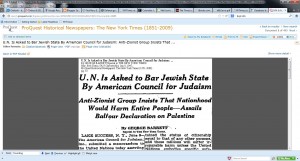 According to the organization, Sulzberger was among its founders.

Many prominent figures in American life were involved in the Council’s earliest days. It was Arthur Hays Sulzberger, publisher of The New York Times, who introduced the phrase “Americans of the Jewish faith” into the Council’s statement of principles. Rabbis who joined the Council led some of the nation’s leading congregations. Among them were Samuel H. Goldenson of New York, Irving Reichart of San Fransisco, Edward N. Calish of Richmond, David Marx of Atlanta, David Lefkowitz of Dallas, Henry Cohen of Galveston, Henry Barnston of Houston and Julian Feibelman of New Orleans.

Why is it relevant now?

In recent weeks, the New York Times has featured articles by anti-Zionists such as Joseph Levine and Ben Ehrenreich. Yousef Munayyer a supporter of a single state has regular column online. In 2010 the New York Times ran an admiring profile of the American Council for Judaism.

Aside from the imbalance that one can see in the opinion pages of the New York Times, one can only wonder what motivates the paper to espouse anti-Zionism so openly with little dissent.

Though Laurel Leff doesn’t go this far, I have to believe that Arthur Hays Sulzberger’s anti-Zionism still dictates much of editorial policy of the New York Times. In the past regular columnists like William Safire and A. M. Rosenthal and, currently, Shmuel Rosner are exceptions.

Anti-Zionism is in the DNA of the New York Times.

Author’s note: I saw a reference about Sulzberger and the American Council for Judaism in a comment to one of my recent posts. Though I can’t find the comment now, I’d like to thank the author for providing me with the idea.

Anti-Zionism may be in the DNA of the New York Times, but why?

Because it’s a bad idea to resurrect the feuds of the past? Because it’s bad public policy to pretend that God gives a people the “right” to plots of land eternally? Because transplanting a nation of Europeans in the middle of tribal savages on what the savages now think of as “their” land is bound to lead to trouble? Because Americans have no business supporting the founding of a state based on pretentions to religious justification?

I can readily discern a reasonable, principled position to oppose the formation of the Jewish state.

That said, the way the specific Jews involved went about acquiring that land (they bought it), and worked within the then-existing legal framework to form a state, was reasonable and fair. Their husbandry of the land they acquired has been outstanding, and the way they treat all of their citizens, including the Muslims and Arabs, is a model the surrounding kleptocracies may yet learn to aspire.

I strongly suspect that Sulzberger’s opposition to Zionism shaped the Zionist movement into something far more honorable and admirable that it would have been, otherwise. That the New York Times continues to fail to recognize that its legitimate concerns on this subject were met long ago is a sign that its policy is now in the control of less-capable intellects. The heirs to an argument often fail to recognize that the argument is over. That is how multi-generational feuds are perpetuated.

Considering the NYT drive-by snidery toward the recently named Pope Francis, in immediately and consistently highlighting “questions” about how aggressively he contested the plight of the disappeared under the Argentinian military government so many decades ago, it would be interesting to see the Times start also questioning it’s own bona-fides in covering the plight of Jewry.

What right does the Times have to criticize Israel at all, given it’s well documented bias? Why not highlight in every article it’s own decades-long failure to be honest about anti-semitism all over the middle east, Russia and in Europe?

Hypocrisy isn’t easier to take, just because it is widespread throughout generations.

Obama is in Israel & you are still stuck in NY.

Israel exists – so what does this Zionist intra arguments matter? Israel just wants the money. if NY Jews feel guilty – that is fine – just stay there in fuckin NY & send money.