Republican Paul McKinley has called upon the Chicago Tribune to sponsor a debate between himself and Democrat candidate Robin Kelly, who thus far has managed to avoid having to debate in public during the general election. Election Day is April 9.

Monday, McKinley issued a press release calling on the Tribune to sponsor a debate, and Wednesday published a letter to the Kelly campaign that describes Kelly’s refusal to debate in public as “unacceptable.”

His followers are joining in, barraging The Chicago Tribune with tweets calling for them to hold a debate. The Tribune appears not to have responded via twitter. 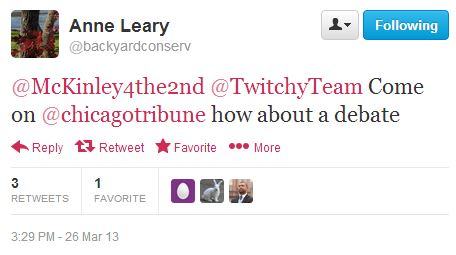 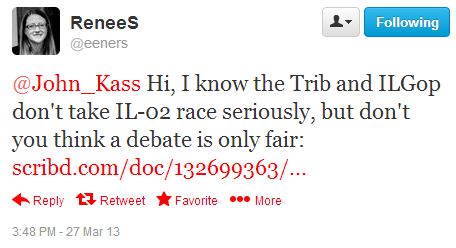 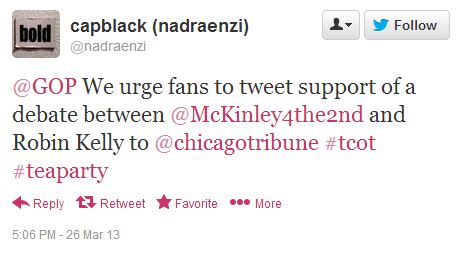 McKinley has referred to Kelly as being in the “Machine Witness Protection Program” and called on The Machine to “let her debate”: 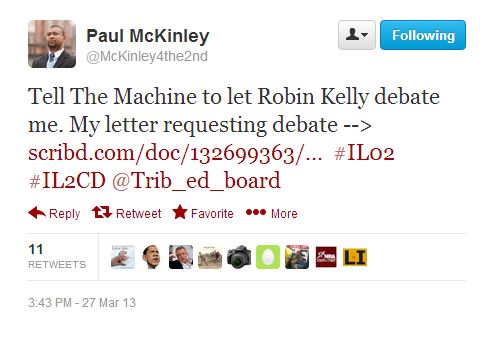 Why is the Chicago Tribune ignoring calls for a debate, which will not only allow them to break news but also serve the readers’ interest?

Update by WAJ — I have activated the Twitter Broadcast feature — you can tweet from the top of the sidebar.

If by some really astronomically small ass chance, Paul McKinley wins, heads will roll and McKinley’s, just may be one of those heads.

They want Robin ‘Chicago’ to win, that way that inner city murder rate with ALL those legal guns can keep ahead of the competition.

Rahm, gots to keep his job! After all Rahmmy is getting his arse kicked by a fat slob union’ette.

They’ll duck it, like Dianne Feinstein ducked it in CA. I still don’t understand how Feinstein’s oppponent let her get away with it, as she could have really made a scene about it.