Condolences flow from the left upon news of Hugo Chavez death

Condolences flow from the left upon news of Hugo Chavez death

Today, the 5th of March, after participating in the meeting of the council of ministers, we came here to the military hospital to follow the sequence of our comandante president’s health. We were receiving information and we were accompanying his daughters, his brother, his family members and we received the hardest and the most tragic of news that we will ever transmit to our people. At 4:25 in the afternoon, today, the 5th of March, Comandante President Hugo Chavez Frias died.

You can count on us, the men and women of the country’s armed forces, who will together ensure that the constitution is upheld. We join the nation in their sorrow, and once more call for unity and peace between all parties. We all, from this moment, will have a mission to comply with and will ensure that for the sake of the nation that it is complied with. Long live Chavez. Long live the revolution.

The Party for Socialism and Liberation sent out an eblast: 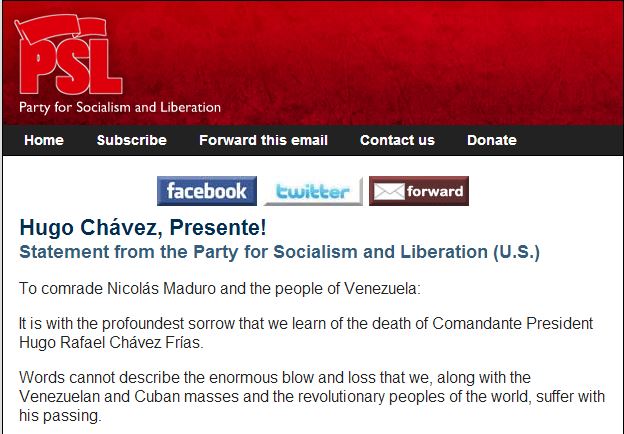 The President of Haiti tweeted (translation via BBC) “I extend, on behalf of the people of Haiti, my sincere condolences to the people after the death of Venezuelan President Hugo Chavez”:

On the other hand, the BBC reported this email they received:

“My Venezuelan girlfriend and every Venezuelan I’ve ever met will be happy and celebrating, I on the other hand am still unsure, hear mostly good things about Chavez through the international press but only bad stories from the Venezuelan people.”

The New York Times reports on how the transition of power will occur:

With the president’s death, the Constitution says that the nation should “proceed to a new election” within 30 days, and that the vice president should take over in the meantime. The election is likely to pit Vice President Nicolás Maduro, whom Mr. Chávez designated as his political successor, against Henrique Capriles Radonski, a young state governor who ran against Mr. Chávez in a presidential election in October.

But there has been heated debate in recent months over clashing interpretations of the constitution, in light of Mr. Chávez’s illness, and it is impossible to predict how the post-Chávez transition will proceed.

WAJ adds: From the archives — Obama Throws Venezuelans Under The Bus: 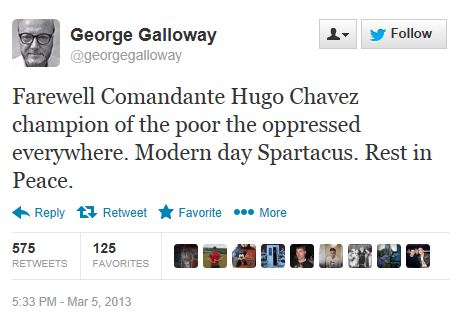 […] have suffered thanks to Hugo Chavez, unlike many on the left who have been quick to offer their heartfelt condolences. But it’s dangerous to believe that Chavez’s problem was one of incompetence rather […]

Per Mary Sue and JP, it will be interesting to see whom Barry sends to represent the US at the funeral.