I came back from an appointment to find that white smoke was wafting from the Vatican Chimney. 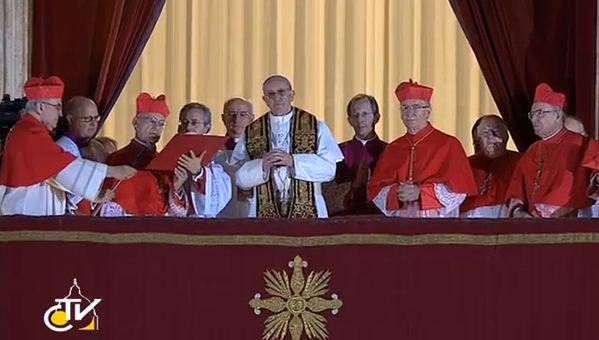 From the Globe and Mail:

Argentine cardinal Jorge Mario Bergoglio will be known as Francis.

At 7:07 p.m., local time, white smoke billowed from the Sistine Chapel, signalling that a new pope had been elected after only two days of voting and five ballots. It came as a surprise, because there was no frontrunner going into the conclave and Vatican watchers had expected another day of voting after two inconclusive votes this morning.

The crowd went wild with enthusiasm. Andrea Mascetti, 27, a Roman lawyer, could not believe his luck. He arrived in the square only minutes before the smoke was spotted. “I was just in time, ” he said. “We just saw history.”

Elected on the fifth ballot, he was chosen in one of the fastest conclaves in years, remarkable given there was no clear front-runner going into the vote and that the church had been in turmoil following the upheaval unleashed by Pope BenedictXVI’s surprise resignation.

My son and I became Catholics in 2010, so this is the first “new Pope” we have seen elected as members of the faith. We are both watching Pope Francis’ first address on Fox News, and Blake commented that there was no number after his name.

It is said that the name the Pope takes is significantly historically and spiritually. For example, blessed John Paul II took his papal name to honor his immediate predecessor. It will be interesting to see which Catholic “Francis” that the new Pope wanted to honor: St. Francis of Assisi, the animal-loving Italian friar who is one of the most venerated religious figures in history, or perhaps St. Francis Xavier, who was known for his missionary work and co-founded the Society of Jesus (aka Jesuits).

Both of these saints shook up their world, and it is said that the the former Argentine Cardinal is a potential reformer. The new Pope is the first from the Americas, which seems to indicate that “inclusion” incorporating the dynamic church in Latin America was an aspect guiding the final conclave vote.

Pope Francis is known for his humility. During his initial address, the Pope bent down and asked the people to pray for him.

As Cardinal, Bergoglio became known for personal humility, doctrinal conservatism and a commitment to social justice. A simple lifestyle has contributed to his reputation for humility. He lives in a small apartment, rather than in the palatial bishop’s residence. He gave up his chauffeured limousine in favor of public transportation, and he reportedly cooks his own meals.

And, indeed, my son and I are. Pope Francis has much hard work ahead. God bless and keep him, and all people who are following today’s news.

Don’t cry for me Argentina ……

The original recording of Evita by Julie Covington who refused Andrew Lloyd Webber’s invite to do the stage production , is stil the best.

Saint Francis of Assisi is more complicated than just the saint of the animals. Yes, he is recorded as having given sermons to birds and fish (and they listened–documented in a book “Little Flowers of Saint Francis” written by one of his contemporaries). He was born to great wealth, which he gave up completely to great ridicule. He set up the first Christmas manger to teach that Jesus was humble. He received the stigmata, or the wounds of Christ, considered the sign of a holy man (google St. Padre Pio for contemporary photographs of stigmata). He is remembered as hearing Jesus speak to him asking him to “rebuild My church”–a request to literally rebuild a crumbling chapel near Assisi, but taken as more generally asking him to evangelize.

Saint Francis Xavier is known as an evangelist to the Indian subcontinent and Japan. He wanted to go to China at great risk to his life, but never made it there.

St. Francis deSales became a priest, although his father wanted him to be a lawyer (he had received a doctorate in law after study in Padua). He was known for his humble demeanor, believing in catching more flies with honey than with vinegar.

Outreach, evangilization, humility; not bad role models for the “Servant of the Servants of Christ.”

Thanks! For a few years, now, I’ve carried a little prayer card I got (along with the famous pumpkin bread) from Monastery of the Angles in a suburb of Los Angeles with St. Pio of Pietrelcina’s picture on one side and a prayer for healing on the other side.

There is this joke about a man who went on a trip.
As the man is flying above the Earth, the has a catastrophic failure and the man is ejected from the plane. As the man is falling, he begins to pray … help me St Francis. Out of a cloud comes a large God-like hand which catches the man. A booming voice can be heard to say … St Francis of Assisi or St Francis Xavier ? The is startled. After a moment to think, he replied … St Francis Xavier. The flips over and releases the man.

[…] To start with, noted Catholic author and a good friend of the Shrine, John Zmirak will join us to discuss the new pope, the “Bishop of Rome”. More on this big event is detailed at Legal Insurrection: Argentina’s Cardinal Jorge Bergoglio becomes Pope Francis – Updated […]

No matter what a person’s sexual orientation, the celibate culture runs the risk of stunting its development and turning sexual impulses into furtive, tortured gestures.
http://www.nytimes.com/2013/02/26/opinion/bruni-the-wages-of-celibacy.html

Clearly, Frank Bruni has no idea what the words “celibacy” and “celibate” actually mean.