How low will left-wing organizations go in demonizing Marco Rubio?

WATER is nothing compared to this hit on Rubio at Colorlines, the left-wing activist group previously featured on the Saturday Night Card Game for its claims that the term “illegal alien” was racist.

An author at Colorlines announced that Marco Rubio’s task was to make Republican racism palatable to Latinos: 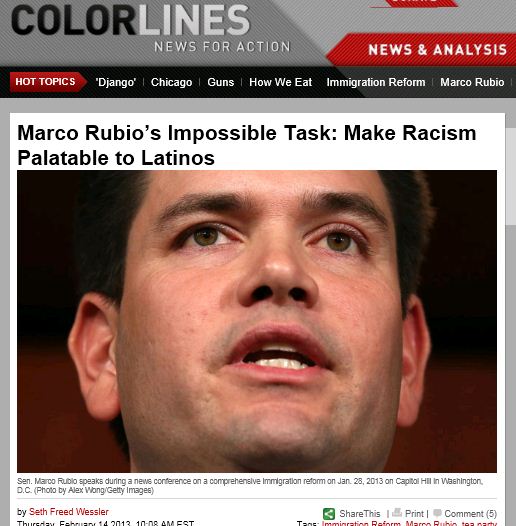 Yup, that’s why the Tea Party launched Marco’s career, Florida voters elected him, and he’s one of the rising stars in the Republican Party, to make Republican racism palatable to Latinos.  Once you define things like limited government, fiscal responsbility, respect for immigration laws and everything else you disagree with as “racist,” then the race card play falls so easily on the table.

The Root re-ran the Colorlines article, and made the headline even worse, accusing Rubio of promoting racism: 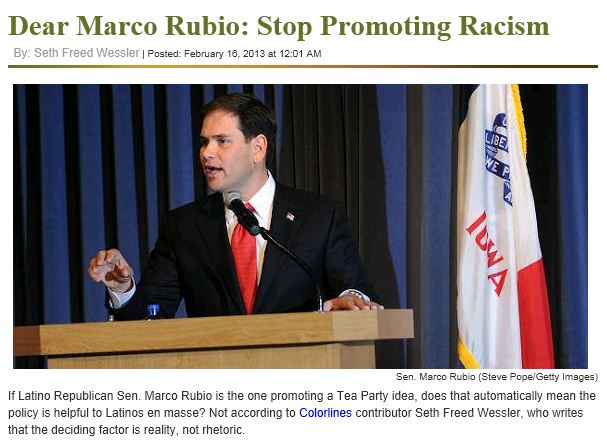 There is no floor beneath which the race card players will not go.

Maybe our most righteous President will ride to his rescue (as Obama did to that silly woman student who can’t buy her own contraceptives and, of course, to Trevon): “If I had a half-brother who was half-Cuban/American, he could look a lot like Marco . . . .”

Somehow, I think it more likely that Obama would say: “If I had an American half-brother, he could look a lot like Charles Dorner.”

In case I haven’t made it clear (or, as Obama would say, “let me be very clear”), I think that Obama’s Travon comment is one of the most pernicious since Ted Kennedy (the Seal Lion of Chappaquiddick) talked about “Bork’s America.” And that’s saying a lot.

Why am I not surprised that a rag named “Colorlines” used the race (based on color) card?

Seems to me if you go out of your way to look for racism, while making it a point of your ‘zine, that you tend to find it anywhere you look.

How DARE the Republican party — the party of old rich white corporatist ipso facto racist patriarchists — have any members who are not. It’s a trick! These make-believe journalists should put “ADVERTISEMENT” at the top of everything they write.

http://twitchy.com/2013/02/17/marco-rubio-gets-last-laugh-raises-over-100000-by-selling-water-bottles/
and
CBS Sports reports that a minor league baseball team will have a Marco Rubio Water Bottle Giveaway Night.