And s/he’s got the proof.

And now it’s pretty much all over the place.

Apologize for what?! Damn straight. 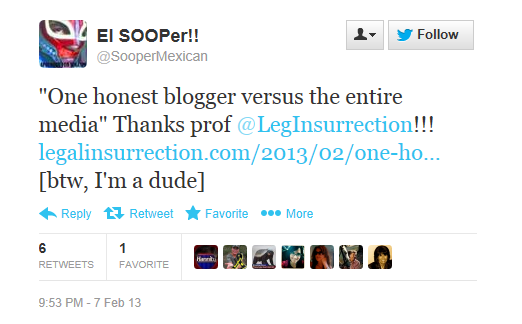 And what has George W. Bush done to catch this guy?

This guy had two concussions playing football as a younger man. Since the libs can’t tie him to the right, maybe they can blame his violence on the concussions, and then shakedown the NFL, make ’em pay to abandon all the concussion stories.

Please tell me again why it’s so important this blogger has brought the truth forward and now it’s all over the internet.
I read half a dozen plus conservative blogs daily. I know the truth of what Obama is doing and has done. What good is that knowledge? I share it on Facebook to like minded individuals I send emails. I email my Representative and Senators. I sign petitions. Someone show me where this has force the main stream media to be truthful in any way. The millions of uninformed are still uninformed. Until we decide we will make the main stream media report truthfully so the lazy, busy and brainwashed know what’s going on I see no reason to pat ourselves on the back for accomplishing anything. When I see a million person march on CBS, NBC, ABC, CNN and PBS demanding they be truthful followed up with refusal to give any money to any entity that sponsors them I will give a well deserved pat on the back to those who have participated.