You can make this stuff up

You can make this stuff up

And still be right.

In the illustration above, the Newsweek cover on the left was mocked-up by the Photoshop artists at National Review to accompany a 2009 satire by Rob Long titled, “A Conversation from Heaven,” regarding what Bernard Goldberg might call Newsweek’s “Slobbering Love Affair” between themselves and Mr. Obama. (Although given The Won’s Hindenburg-sized ego and Titanic-sized aloofness, presumably the affair is largely unrequited.)

On the right, is the real thing. Of course, as Newsbusters notes today, it’s merely replaying former Newsweek editor Evan Thomas’s assertion in 2009 that “In a way, Obama’s standing above the country, above — above the world. He’s sort of God.” 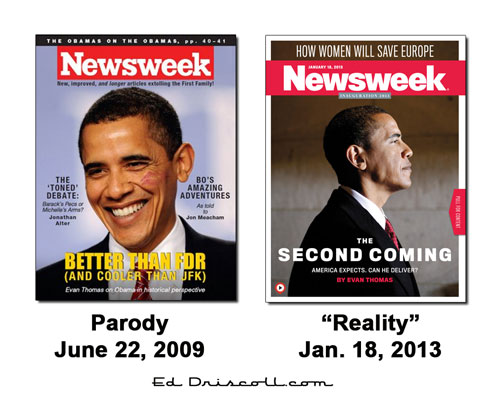 On the right, is the real thing.

Objection. Newsweek, not being in print anymore, does not have a cover to speak of. This is just a piece of idol worship that found its way to the Daily Beast website.