When concerts are outlawed, only outlaws will have concerts

When concerts are outlawed, only outlaws will have concerts

The left-blogosphere is joyous because there were accidental shootings at gun shows and events for Gun Appreciation Day.

Really, they’re putting the full snark on, because nothing says “suspend the 2nd Amendment” like accidental shootings: 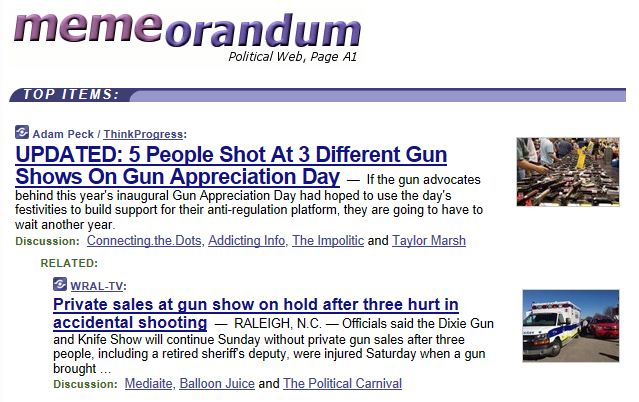 There’s something much more dangerous.

Rock concerts, which have a sordid history of serious injuries and deaths, including (via The Worst Concert Accidents):

One of the most notable tragedies in recent musical memory came with the fire at the Station nightclub in West Warwick, Rhode Island. 80s metal band Great White had managed to pack the place beyond capacity, and the assembled throng of hair-metal fans were having a grand old time until the band’s manager set off some pyro in the very unsuitable space. The sparks caught some exposed insulation on fire, turning the club into a deathtrap inferno that claimed the lives of 100 people.

It’s just a general rule of thumb: more people, more danger. So when Pearl Jam played the Roskilde music festival in 2000 and over 50,000 people turned out to see the grunge band, nothing good could come of it. People toward the back of the venue started to complain that they couldn’t hear, so they started to press forward. Once enough people start pressing, it becomes a wave. And once a wave gets big enough, people start to get crushed. The carnage at Roskilde was epic, with eleven people being suffocated in the mass of humanity. Pearl Jam almost broke up as a result of the incident, but decided to soldier on.

Somebody doesn’t have to die to make this list – a concert accident can be awful even with zero fatalities. Take this AC/DC concert in Brisbane – there wasn’t anything wrong with the band, or the venue, or security. It was just simple dumb human error that got a poor disabled man sent to the hospital with grisly injuries. The man, who was in a motorized wheelchair, was rocking out to the band when his friend accidentally hit the joystick, sending him forward through the security barrier and causing the metal rod the man used to manipulate objects to stab deep into his eye. Yikes.

Don’t even go there with cars:

0
Instapundit » Blog Archive » PROF. JACOBSON: When Concerts Are Outlawed, Only Outlaws Will Have Concerts. And isn’t banning gun… | January 20, 2013 at 9:47 pm

[…] JACOBSON: When Concerts Are Outlawed, Only Outlaws Will Have Concerts. And isn’t banning gun shows because you don’t like the “gun culture” kinda […]

What about The Who? Eleven dead, 26 injured at a 1979 concert in Cincinnati.

“at least you dickweeds are history”

Eliminationist rhetoric. This is why AR’s are necessary — people like you threatening democide.

That should be okay since there has never been an intentional violent injury at an Outlaws concert. http://www.youtube.com/watch?v=CvreqOlMF5c

The gun control advocates have repeatedly told us that if their loegislation saves even a single life it is justified. So does the same standard apply to lives lost at rock concerts, and therefore we must ban them because banning them could save at least one life.