“Rigging” the electoral system only is bad when it hurts Democrats

“Rigging” the electoral system only is bad when it hurts Democrats

As things stand now, the Electoral College favors Democrats because they are all but guaranteed to win a small number of large winner take all states, such as California, New York, Illinois, Michigan, Pennsylvania, New Jersey, plus a coalition of hopelessly blue states.

Democrats start off close to victory because of winner-take-all voting in those states, even if they win those states by a small margin in each state.

The system currently is “rigged” to favor Democrats, if you want to look at it that way.

The possibility that this may help Republicans has Larry Sabato screaming Stop Thief:

As we suspected, it would permit a GOP nominee to capture the White House even while losing the popular vote by many millions. This is not a relatively small Electoral College “misfire” on the order of 1888 or 2000. Instead, it is a corrupt and cynical maneuver to frustrate popular will and put a heavy thumb — the whole hand, in fact — on the scale for future Republican candidates. We do not play presidential politics with a golf handicap awarded to the weaker side.

Republicans face a choice that can best be characterized by personalizing it. A healthy, optimistic party is Reaganesque, convinced that it can win the future by embracing it, and by making a positive case for its philosophy and candidates to all Americans. A party in decline is Nixonian and fears the future; it sees enemies everywhere, feels overwhelmed by electoral trends, and thinks it can win only by cheating, by subverting the system and stacking the deck in its favor. Whose presidency was more successful, Reagan’s or Nixon’s? Which man made the Republican brand more appealing?

Sorry, but that argument doesn’t cut it.

Award by congressional district is in use in two states, has been proposed many times before elsewhere, and still requires presidential candidates to win elections in congressional districts.  It may favor Republicans, or it may not, depending on the state and the presidential candidate.  Awarding electoral votes by district may have a positive impact of forcing candidates to campaign outside the large cities and bring a more geographically diverse electorate into the voting booth for them.

To equate it to cheating is constitutionally ignorant.  I also reject the methodology of looking back at the last election in which the system was not in place and forecasting future results.  The fact is we don’t know what the results would have been if the candidates had to alter their campaign strategies under a district-based formula.

While awarding electors by congressional district may favor Republicans now in some states, it may favor Democrats in the future, just as the winner take all favors Democrats now.  To take a temporal view and declare it “cheating” shows that the accuser is politicizing the issue just as much as the alleged cheaters.

Indeed, look at the rogues gallery screaming that Republicans want to “rig” the system: 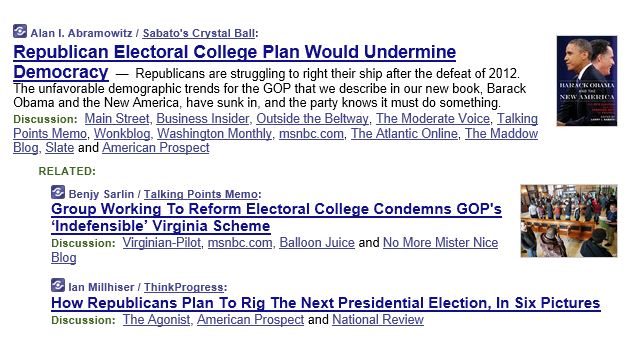 Oh, TPM and Think Progress are only concerned with fairness, right?  And Balloon Juice and Maddow Blog? If they are against it, it’s almost certainly good for the nation.

If the shoe were on the other foot we know what the result would be.  They like the current system — which is not constitutionally required — because it helps them.

The push and pull of redistricting as a result of state-level elections is part of the process, and if it impacts the Electoral College, so be it.

Elections have consequences.  Including at the state level.

“Do our votes count during any election?”
quote-

“There was vote fraud in the March 1996 primary when I ran as a Republican against the nitwit incumbent, Congressman Wally Herger. Just one of the many things that happened: While I was legally on the ballot, in the largest county in the district, my name didn’t even appear on the ballot in one of the biggest precincts! When all was said and done, the Secretary of State, Republican Bill Jones, refused to investigate and in his short, terse letter to me said if I didn’t like the outcome of the election, sue the state. By that time, the vote had been certified and it was all over. At that point I realized the “Grand Old Party” wasn’t interested in the truth or fair elections, the party was over, I kissed the GOP good bye and have never regretted my decision.”

Quote-
“University researchers delivered a serious blow to the current crop of electronic voting systems in an analysis of one such system’s source code in which they concluded that a voter could cast unlimited ballots without detection.”

“We must have paper ballots that are marked with a black felt pen that are then put into a clear plastic box that sits in everyone’s view until time to count. The count must take place in front of anyone who wants to watch. This will accomplish a number of things:

1. With a plain, sturdy paper ballot, using a black felt pen, there can be no mistakes about chads or other diversions. If someone makes a mistake, they can either X it out clearly and remark their choice, or bad ballots would be shredded right there in front of everyone and a new ballot issued.

2. All ballots placed in a clear plastic box that never leaves the precinct so they can be lost, stolen or stuffed behind closed doors; neither will anyone be able to alter the ballots. After the count, the boxes would then be escorted by the county sheriff and deputies to the county clerk’s office for secured storage in the event a recount is requested. The process now means you vote, put the ballot in a cardboard box, walk out the door and never know what happened to your ballot after that. I know what happened with mine in the 1996 primary; it was a joke, a open invitation for fraud.

3. Break down the precincts. No more than 20,000 voters per precinct so that hand counting is manageable, accurate and time effective. There are more than enough volunteers in this country who want fair and impartial elections to assist on election day. In 2000, up in Canada with tens of millions of votes to count by hand, it was done and finished in less than 24 hours. Where there’s a will there’s a way. Paper ballots, hand counted in the precinct in front of anyone who wants to watch is the only way to ensure fair and impartial elections, period.”
unquote

[…] I’ve gone into this before, but everything about this looks bad. It’s not that it’s unconstitutional or illegal in any fashion, but the image is about as horrible as you can get. Granted… this could work. It might even win a presidential election which repeated recent patterns for the Democrats. But at what cost? It seems as if both sides are rushing to either justify or condemn this without any long term consideration. For example, Professor Jacobson. […]

Typical RINO whining. The LEFT is effectively perpetuating a large scale voter fraud operation as PART of their campaign, and us conservatives as usual always have to “play nice” don’t cause waves. When will conservatives LEARN that the LEFT does not play nice. And if we are to win, we have to get in to the gutter with them. It’s sad, but it’s REALITY.

[…] Democratic political analyst Larry Sabato had this to say: […]