“and then a roll of duct tape came out”

“and then a roll of duct tape came out”

I wonder what the three masked intruders planned on using the duct tape for with this woman they found alone at home.  And note that they brought the duct tape with them.

She pulled out her gun and shot one of the three masked intruders and scuffled with another.  The three then fled and one was arrested with a gun shot wound to the stomach at a local hospital.  Home invasion suspect arrested after woman opens fire (h/t Instapundit) 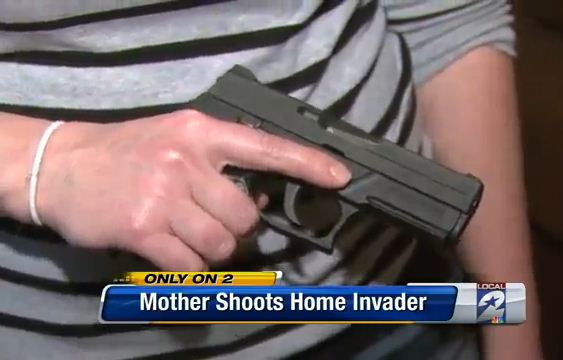 According to my weapons consultant, the gun appears to be a Sig-Sauer P250, standard sized, which holds up to 17 rounds.

Three intruders, 7-rounds.  Better be a good shot.  Or get lucky, as she did, that one round scares them away.

According to some of our genius Collective, this woman is a vigilante.

I hesitate to criticize someone who faced down a situation I’ve never confronted. But I’m going to anyway.

Worst case scenario her attackers couldn’t shoot her with her own (then empty) gun.

Unfortunately there is room for criticism. One of the guys got the gun away from her. She should have shot him when he came after her and before he kneed her in the face. Shoot until the thread is neutralized.

“Shoot until the thread is neutralized.”

Top Gun Range, in Houston, has offered to provide her with a new gun, shooting lessons and use of the range whenever she wants.

Also, the man who was shot was Life Flighted (thank you, taxpayers) to Hermann Memorial Hospital (thanks again taxpayers) and expected to recover. He is a Mexican National who is here illegally. Can we bill Mexico for his hospital care and his helicopter trip or at least, DEDUCT his costs from whatever “foreign aid” we give them?

The news story said that is when she went and got her second gun. There is some argument about emptying your weapon thus leaving yourself unarmed in these situations. The bad guys usually run when one of them has been wounded. They want medical attention for their comrade, they don’t want to leave a person who can identify them behind, and gunfire tends to scramble their ability to think. So they run. Since this happened in a semi-rural area north of Houston the odds of this lady having a second weapon, rifles and shotguns are more common than hand guns in these areas, the possibility of her firing at them while they attempted to escape was certainly on their minds.

Everyone needs to train in combat shooting if they have a gun for self-protection.

Double-taps. On every target. If the are moving after that in any direction but AWAY, repeat as necessary.

Try one on for size: http://www.mossberg.com/products/shotguns/pump-action/500-special-purpose

I agree, the three should have been carried out in body bags. They carry around duct tape for a reason, and it shows they weren’t just interested in grabbing a laptop.

Professor, even if she were in NY she’d have been able to have the pistol as Sig makes a 10 round magazine for that model and have announced that they will make 7 round models for NY sale in the future.

And yes, we are only “allowed” to load 7 rounds in our 10 rounders at home and on the street (but we are allowed to load them with 10 at a firing range where I presume it’s more dangerous!)

Exactly! If you’re a disadvantaged shooter, or there is a diversity of criminals, then you deserve to be murdered, raped, or otherwise exploited.

The only gun control law required is equal accountability, for criminals, government agents, and other members of society.

Why the ambiguity on magazine laws?

It’s because the Democrats don’t want people to be armed. In this woman’s case, the Democrats would rather that she be raped and murdered, so they could hold hands, have a candle-light vigil and wear a “look how much I care” ribbon to show how much in solidarity they are. They could heap teddy bears, flowers, victim photos and candle jars outside her home, in some bullshit attempt to appear all caring and bereaved. Then, emotionally sated at last, they could go home and feel morally superior to all us rubes who cling to our guns, religion and family values.

Their problem is that because they can’t conceive of themselves doing it, they believe no “normal” person can either and that you’re somehow morally and mentally defective (bitter clingers according to Dear Leader)if you can take responsibility to defend yourself.

What they fail to realize is that the self defense is all you have when seconds count and the Police are minutes away.

I carry a pistol in a holster on my belt when my husband is out of town. The moral of this story is carry on your hip all day, every night.

So right. She had to rely on stratagems to get to her gun, then she didn’t keep shooting. After being disarmed(she’s lucky she wasn’t murdered with her own gun), she had to get to her other gun (thank God she had one). Hopefully, she gets herself a holster and packs heat night and day. Those men came with intent to, possibly to kidnap, rape, and kill … or sell into slavery.