Twila Barnes is a Cherokee genealogist who, along with her Cherokee genealogy team, has done more than anyone to document that Elizabeth Warren does not have Cherokee ancestry and that her family lore stories likely are false.

Barnes has published her findings in great detail with documentary back-up at her blog Thoughts from Polly’s Granddaughter.

Among other things, Barnes has traced the family history of Warren’s mother, has located documents showing her mother’s family always was identified as white, and even that Warren herself reported her “Aunt Bee” (as to whom Warren attributed the “high cheekbones” comment) to be White.

Barnes team also located the 1932 wedding announcement and other documents for Warren’s parents which rebut Warren’s claims that her parents eloped because her father’s family rejected her supposedly Native American mother.  Although there never was a claim that Warren’s maternal grandfather was Cherokee, Barnes even traced that family lineage just to make sure.

Barnes has been interviewed numerous times about her findings, including on Fox News and local news in Boston.

Barnes is part of the group Cherokees Demand Truth from Elizabeth Warren.

No one has been able to show that any of Barnes’ research was incorrect.

Yet Barnes was attacked by the Warren campaign when Barnes traveled in June with a group of Cherokees seeking a meeting with Warren to show Warren her genealogy.  Warren rejected the meeting, and her campaign sought to portray the group as a Brown campaign operation, and attacked the team for associating with a “right-wing extremist” (me!).

The attacks on Barnes have gone beyond the Warren campaign rhetoric.

Not long after Warren’s problems surfaced and Barnes research was highlighted in the media, a Warren supporter using the name “Marilyn Ruhl” (not sure if that is a real or fake name) started a Facebook group with the title “The Native American Ancestors Of Elizabeth Warren” ostensibly devoted to providing documentary proof that Warren was Cherokee.

The group described itself as being made up of Warren campaign volunteers: 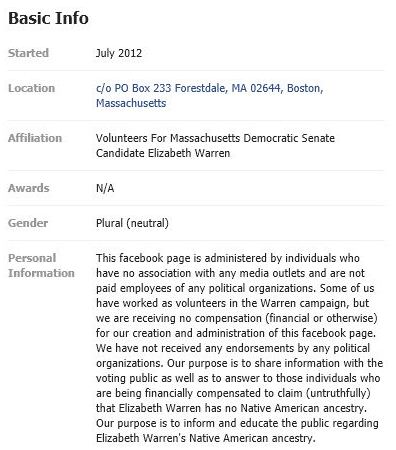 Barnes extensively has debunked genealogical claims by this pro-Warren group by showing that their claims of Warren Cherokee ancestry were based on false and speculative connections of various Cherokees to Warren’s lineage.

The comments on the Facebook page and even some of the posts have been devoted to attacking Barnes.  I have been following the personal attacks on Barnes for most of the summer, but did not write previously so as not to provide attention to the pro-Warren group, which until recently had few followers.

Now Barnes has posted about the harassment, Veiled Threats and Other, including numerous screenshots such as this email from Ruhl (redacton by me): 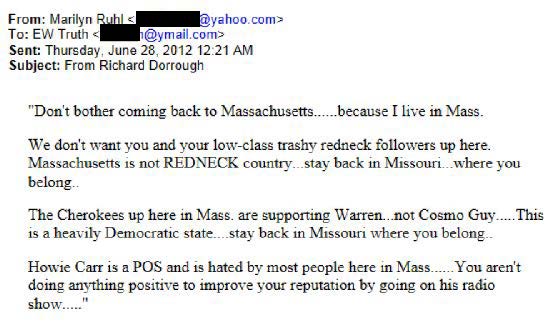 And this claim by Ruhl that she is reporting information back to the Warren campaign: 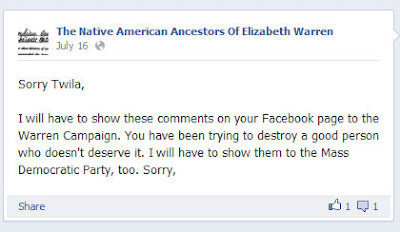 Rather than show specifics of where Barnes’ research supposedly is wrong, the pro-Warren group attacks Barnes personally and suggests a conspiracy involving even Karl Rove: 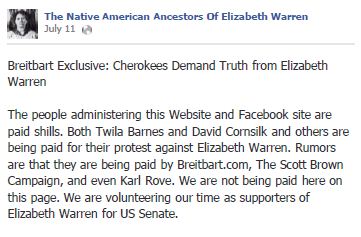 I’m not reprinting some of the more pernicious rumors and accusations they attempt to spread both on that Facebook page and elsewhere, so as not to spread false allegations, but it is ugly.

This comment by “Marie Canilla” (possibly the same person as the user of the name “Marilyn Ruhl”) is typical of the threat to smear Barnes (redaction by me): 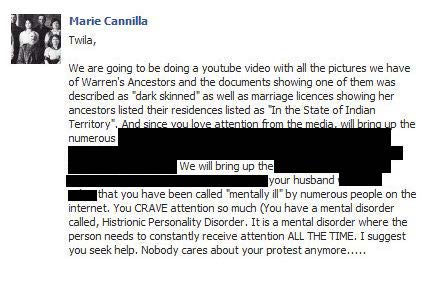 There is a consistent effort to paint Barnes as crazy, and they refer to her as “Twilight.”  One of the participants, a purported genealogist from upstate New York,  attempted to post such comments at LI, but I did not put it through.

There is a lot more evidence saved of the attempt to harass Barnes, but you get the picture.  I have not yet identified all of the participants in this campaign, but will if it escalates further.

This has been a classic “shoot the messenger” play.

A Cherokee genealogist spoke out with evidence showing that Elizabeth Warren’s claims to be Cherokee and family lore stories were false, traveled to Boston to show Warren the evidence, and then was met with smear tactics by the Warren campaign and its supporters.

Related:  In case you didn’t realize it at the time, Barnes was featured prominently in our own video about Warren, which now has over 13,000 views on YouTube (actually, it has a lot more but that’s a long story):