Egyptian protesters on Tuesday took down the American flag from the walls of the US embassy in Cairo during a thousands-strong demonstration held to protest a short film produced by US based Coptic-Christians that critics say demeans Islam and the Prophet Mohammed.

A number of protesters managed to climb atop the walls surrounding the embassy, while others were able to breach the embassy’s garden, where they removed an American flag and replaced it with another one bearing the Islamic declaration of faith: “There is no God but Allah and Mohammed is the Prophet of Allah.”

The Ultras White Knights – hardcore football fans – claimed that members of their group had brought down the US flag. While group members have since retreated from the scene, they say they are planning additional rallies to protest the film.

How did the U.S. Embassy react?

You know where I’m going with this.  The Embassy condemned the creators of the film, not the people who stormed the Embassy: 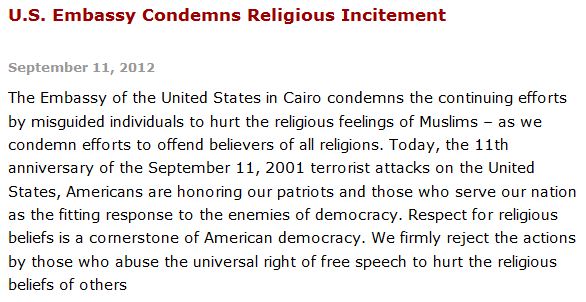 We have seen this film before.

Once the Egyptians take some hostages at the embassy, the circle of our president’s Jimmy Carter loserhood will be complete…#tcot

When Barack Obama hailed the Arab spring last year and hastened the exit of Egyptian strongman and long time US ally Mubarak, the Administration predicted the policy would bear fruit.

Today, on the eleventh anniversary of 9-11, it has.

American sovereignty is being ignored in America and in her embassy abroad. So much for “home of the brave”. It’s more like home of the submissive. I wonder what else Americans are prepared to forsake. Perhaps their own children, by the millions, annually. Americans are voluntarily (e.g. abortion) and involuntarily (e.g. “Dream Act”) being displaced at home and abroad while they dream of instant gratification, most notably behaviors which constitute evolutionary dysfunction.

As for Egypt, with a reduced American influence and diminished secular authority, the oppression of Christians, mainly, will continue apace. Interesting enough, the violation of Christian rights barely qualifies as human rights violations according to “human rights” businesses.

Reminds me of pre-WWII Britain.

All the politicians (except Churchill) and media types were scrupulously respectful toward the Nazis. Hitler was referred to, with absurd reverence, as Chancellor Hitler or Herr Hitler. “Appeasement” wasn’t a bad word: it was a stylish foreign policy philosophy among the elites, Neville Chamberlain foremost. In short, the Establishment was willfully blind.

Substitute “Islamists” for “Nazis” and “Palin” or “Gingrich” for “Churchill,” and you have our situation today.

It bears remembering: the war the British could have avoided by squashing Hitler early on wound up ruining them as a world power. We are headed down the same road.

No
Just when is the ‘earlier’ when a hobbled Britain could have ‘squashed Hitler”? 1933?

Britain began the rearming in 1936 giving Germany a 3 year headway.

Besides you could say the same about the USA.

You’re playing fast and loose with facts. As usual.

Hitler’s military forces were relatively weak at the time of the Anschluss and Sudetenland (circa 1938, long after your arbitrary 1936 date). Had someone stood up to him then, there’s a high probability Germany would have lost and the Nazi government would have collapsed. Messy, but limited mostly to the folks who deserved it, namely the German people who disliked Hitler (so they say now) so much.

You say (in an insulting, gratuitous piece of foolishness!) that the U.S. could have done something about Hitler. OK: Europe today is even more Islamist-appeasing than the USA. By your logic, the U.S. should intervene in Europe and drive the Islamists out. Right?

I stated the equivalent time -1936 when it became more than obvious & way before 38.

The USA was also in Peacenik frame of mind. I did not say the US ought To have stepped in -but it may have been prudent tp up war manufacturing / defence /attack capabilities.

You can lay off the personal attacks -I don’t find your posts particularly erudite but I don’t attack you. Did not you call me a Euro Commie? If I were I might know a bit more about Europe than you.

Anyhow why did you bring Europe into it? You some sort of Europhile?

Cairo & Benghazi baby is were this action is on 9/11 which we have reserved for you.

Nothing to do with us today.

Spewing all kinds of silly rhetoric, then trying to walk it back by blaming the person you attacked.

Kinda like Obama does to Romney. So you’ve got that going for you.

I’m done talking to you.

Caroline Glick: “Since taking office, Obama has made clear that he views the US as an imperialist power on the world stage. As a result, the overarching goal of Obama’s foreign policy has been to end US global hegemony.”  unquote

Obama’s intent and goal is to ensure America’s impotency around the world, as well as at home.

The accumulated factual evidence is this end is overwhelming. From the sabotaging of America’s energy supply and production, to massive govt intervention and control of the US private sector economy, to redistributing American tax payer wealth to whomever he sees fit, against the will of the American people- especially to terrorist organizations like the PLA, Muslim Brotherhood, Hamas.. On top of Obama’s dismantling of America’s Military, via slashing the Budget to a fraction what is should be, both in the current budget cuts, and now mandate forced Military budget cuts – “sequestration”, and from both political party hacks in Congress.. which drastically reduces much needed hardware equipment- planes, ships, tanks, etc, as well as destroying America’s nuclear arsenal and delivery systems, not to mention the reduction in US Military personnel at an astonishing rate, at a time of intense world dangers that poses another world war threat, especially with Iran on the verge of attaining, possessing nuclear weapons / WMD, in addition to the radical extremist islamic muslims taking control of every other country in the middle east- eg; Egypt, Libya, Syria, etc.. All of are a threat to, thus violates and endangers US National Security, not to mention puts into serious danger our closest mid-east ally, Israel.

In addition, Obama’s direct executive orders / official govt diplomatic policy directives are one of being apologetic, appeasing, and a position of capitulation, directed to all govt agencies and US Embassy’s around the world. Obama has made it clear what his intentions are- anti-American.

And the Democratic Congress under both Obamacrats and Republicrats- Harry Reid, Nancy Pelosi, as well as that GOP establishment RINO Boehner, do nothing but assist Obama every step of the way.

They should all be impeached !!

This so called outrage about a movie, is just their excuse to advance their anti-American jihad cause.. ie; spark another world wide anarchistic islamic muslim domino effect revolution. Freedom and Liberty are not subject to what radical muslim islamists say it is, because they are intolerant of differing opinions, ideologies, philosophies, religions, races, etc, etc..