Play hard to get with Census survey, and you might win a gift card

Play hard to get with Census survey, and you might win a gift card

Your tax dollars at work.

Yesterday I posted the response from Matt in Colorado to the American Community Survey being conducted by the U.S. Census Bureau.

I read your post about the census surveyers, They’ve been bugging me too. This was on my door a week or so ago. 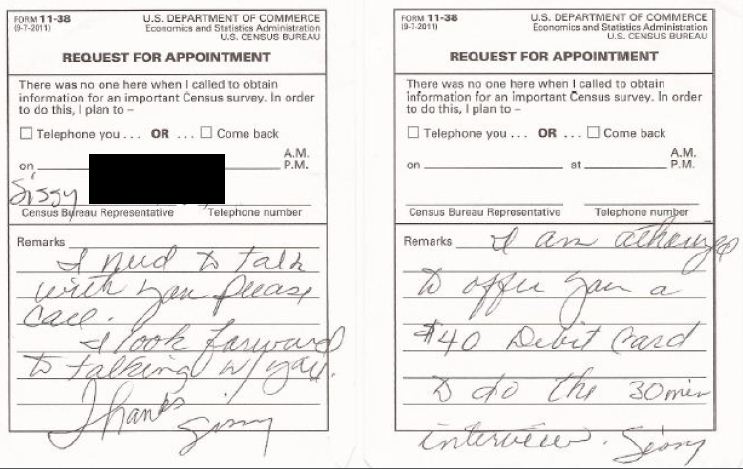 Back in 2009 I was being hassled by the Census Bureau (CB) with the ACS (American Community Survey). At that time I found a website (no2acs.com) that had a lot of postings from regular and legal types people. The site was shut down before the 2010 census, although the domain name is still around. I copied a lot of the good advice (about 6 pages) that was posted on the site and have it saved on my computer.

Here is one of the posts:
———————————————————–
In a nutshell – the CB, until it files a motion in court, has no authority to compel anyone to fill out the survey. Further, the ACS is a monthly survey not used for congressional apportionment.
http://www.lawandfreedom.com/site/constitutional/Census.pdf
This writ spells out the unconstitutional nature of the 2000 Census long form. The same arguments apply to the ACS as well.
Many of the questions on the ACS are a simple and direct violation of the Fourth Amendment.
They are a violation of the search and seizure clause of the Constitution because they attempt to get your financial, health, and other information without a warrant. What’s worse, is that the ACS attempts to get YOU to violate your own constitutional rights.
No one has ever been prosecuted for failing to respond to the ACS. The reason is simple. If anyone was prosecuted, they and all others bothered by the thing would have standing in Federal Court to challenge the constitutionality of the search and seizure of information embodied by the ACS.
————————————————-

I wonder how long before the CB police will be jumping all over legalinsurrection and try to shut it down for the information that people are posting here.

The requirement for the decennial census is in Article I Section 2 of the U.S. Constitution as amended by the Fourteen Amendment. The Constitution requires an “enumeration” to be conducted “in such a manner as they (Congress) shall by Law direct.” Repeating for emphasis — Congress decides what information is to be provided to the Census-takers, not some blog commenter.

The 2010 Census — which asked each American household the same ten questions — could be considered an improvement over the 2000 process where approximately one in six households was asked for a lot more detailed information (the ‘long form’). The Census Bureau is required by law to holds all Census data confidential for 72 years. In April of his year the Bureau released the information collected in the 1940 Census.

Folks, don’t confuse the Census and the American Community Survey. The ACS (which is meant to collect demographic data) is conducted on a continual basis and is mandated by federal law rather than the Constitution.

I received one and I threw it out because no one that I know had received one. Then I got another one, then I got a card that said that I could answer by phone. Called them and asked why did they need so much personal information that really had nothing to do with the census. I was told that she would explain to me why they were needed to know. The only thing she explained was the need to know how much I spend on electricity. According to her it was because they wanted to know what kind of energy was being used in different parts of the country.

After answering ALL of her questions I apologized for not answering the ACS promptly but that she had to understand that I was born in a communist country and all of those questions that had nothing to do with the census reminded me when I was a child and men in militia uniforms with machine guns came into my parents house to take inventory of the house and what we had in the house and that I actually thought the form was some kind of joke since I found it so difficult to believe that the United States would be so intrusive as to ask how many rooms a house had, what is owed for the house, mortgage payments, how much I spend in electricity, etc. I also told her that I remember my parents being told that their house could house five families so I had visions of people knocking at my door to ask to move in because other than that, I did not see what business it was of the government’s to know the size of my home or what I owe on it unless they were planning to pay off my mortgage.

In retrospect, maybe I should have waited for the debit card.