Even the Huffington Post has to admit, although they would never come out and say it, that Barack Obama’s reelection prospects are not moving in the right direction.

I’ve been watching the electoral map the Huffington Post has for the last few months. If you’re able to make it past all the anti-Romney, anti-Ryan, and anti-Republican headlines that they’ve been churning out lately, you can reach the part of the site where they’ve been tracking polls and making projections for the general election.

This map, which is “based on HuffPost pollster charts and analysis,” is a revealing glimpse into how the Presidential election has evolved since the early summer months.

I took this first screen shot on July 18. HuffPo’s formula was then declaring that the President’s reelection was essentially a lock, with Barack Obama already laying claim to 274 electoral votes. In order to win, a candidate need only secure 270. 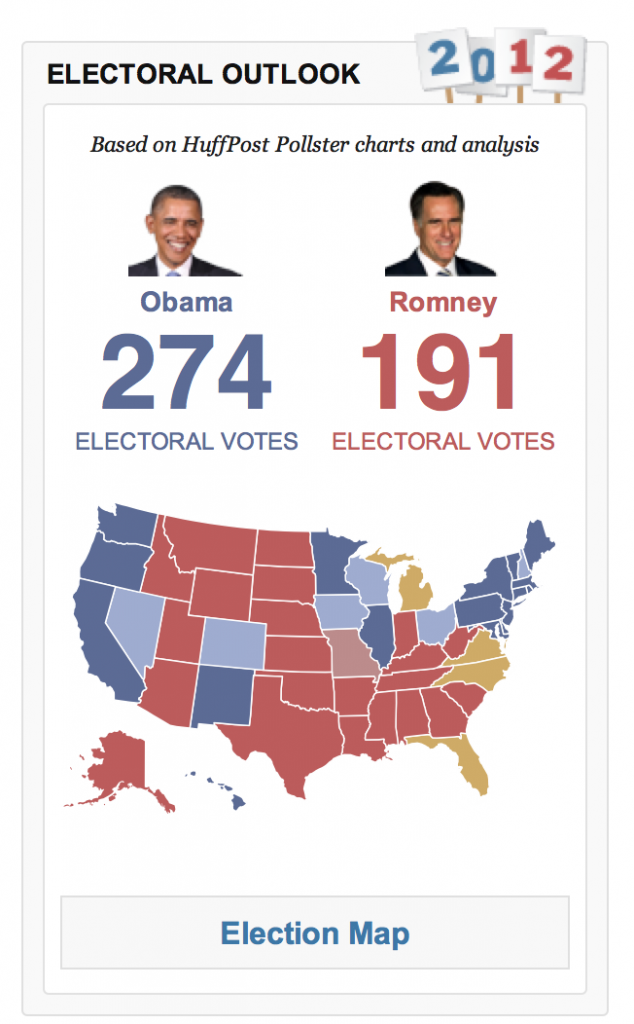 Below is a screenshot from August 29th. HuffPo had apparently calculated that the President’s lead was now below the “guaranteed win” mark, but still very comfortable. All that would be necessary is to grab one or two of the swing states, and President Obama’s reelection would be sealed. 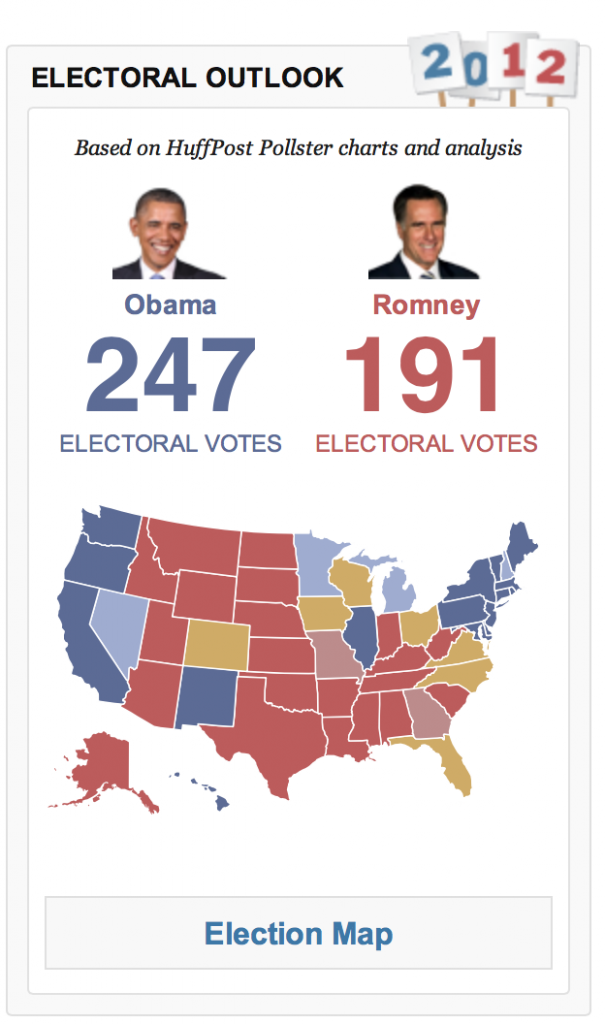 This morning, I captured another screen shot which showed yet another drop for President Obama (Romney still holding at 191). Although HuffPo confidently declared this morning that last week’s RNC gave Romney “No Bounce,” by their own electoral count, the President lost hold of another 15 electoral votes. 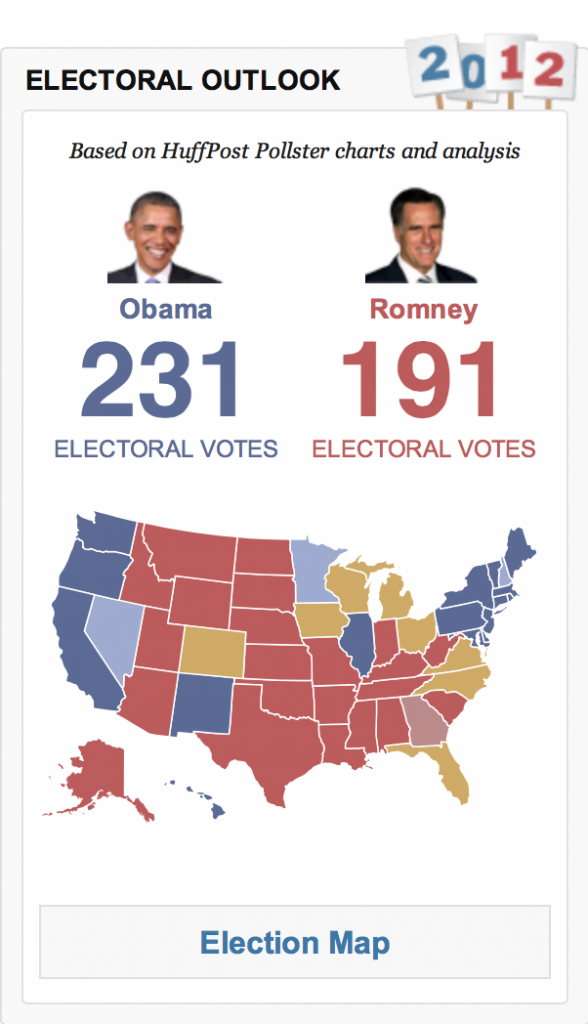 While HuffPo makes no representation that the earlier electoral counts were guaranteed to remain static, its interesting to see just how quickly the President’s advantage is being winnowed away.

Perhaps there hasn’t been a “bounce.” Perhaps its actually something much worse, a steady trend. Mike Flynn at Breitbart.com has reached a similar conclusion.

For the past several days, the media have consoled themselves that Romney didn’t receive any kind of bounce from the RNC convention last week in Tampa. Torture polls with enough Democrat bias in their samples and you can convince yourself of anything. Really, their willful ignorance of reality is their most precious trait. So, if there was no bounce, why are all the battleground states moving towards Romney. Obama won the 11 battleground states by 7 points in 2008. Today, Romney leads by 2.

Flynn went on to say:

So, sure, let’s all pretend Romney didn’t get any kind of bounce out of the convention. Let’s pretend that Romney has a very narrow path to 270 electoral votes and Obama has all these mythical ways to get there. The trend is your friend, though. And the trend is looking very good for Romney.

Indeed, even the Huffington Post has to admit it. That pesky trend is scary when its not on your side.

Letting the moonbats down easy. If you spook them, all sorts of bad things can happen. Best to ease them down.

The Huffpo results are simply indicative of the inevitable.

O’bammy is toast UNLESS the democrats somehow pull the proverbial magic bunny of fabrication out of a tattered hat and cause it to stick.

My bet is that the anointed one will receive a notice of eviction on November 6, 2012…

Professor, I’d like to add my two cents on this issue. I believe we are seeing a change more serious than the HuffPo is indicating with its chart. I live in NH and have been polled every day for the last week on my race, age, political status, if I’m a likely voter, and who I’d vote for.

I realize the chart shows NH leaning left, but from what I see driving around Southern NH tells a different story. Since most MA transplants migrate to the southern part of the state when they flee taxachusetts, you would expect the bottom part of the state to be strongly blue. However, if the 2010 elections and what I’m seeing now is an indication of the 2012 Presidential election, then Obama has lost the state.

I can’t imagine the folks frustrated in 2010 who voted to strongly swing the state to the right are now somehow leaning left again. The folks in the Live Free or Die state have long memories. Something is brewing in the air, but I can’t quite put my finger on what the scent is….