Turns out tape cuts out part of controversial Romney answer

David Corn of Mother Jones released the “complete” audio and video of the secretly recorded Mitt Romney speech at a private fundraiser.

Yet the complete audio and video is not complete.  There is a gap in the recording immediately after Romney’s now famous discussion of the 47% of voters who don’t pay taxes.  The cut in the audio and video comes while Romney is in mid-sentence, so we actually do not have the full audio of what Romney said on the subject.

The next audio/video (Part 2) picks up with Romney talking about China.

I noticed this this afternoon and sent two tweets to Corn seeking an explanation. 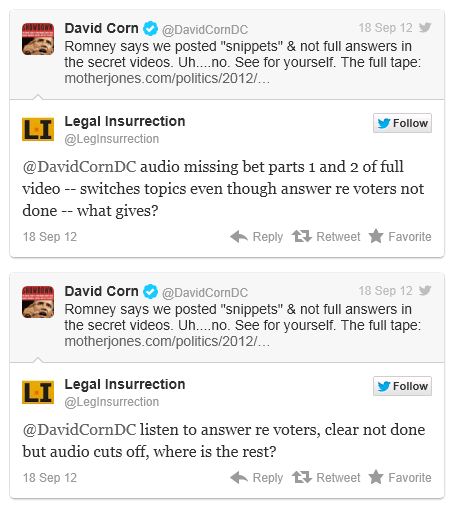 I also sent Corn a Facebook message. I have yet to receive a response. I don’t have and can’t find Corn’s email address, or I would have done that also.

This audio/video from The Blaze shows the gap (via Moe Lane):

[Romney]“We do all these polls — I find it amazing. We poll all these people to see where you stand in the polls but 45 percent of the people vote for the Republicans and 48 or 49–,” This is where the first part of the video cuts out.

“…about twice as much as China, not 10 times as much like is reported. And we have responsibility for the whole world, they’re only focused on one little area of the world, the south china sea…”

Something is missing.  Romney’s 47% answer was cut off before completed, and is not picked up on the Part 2 audio video.

So the “complete” audio/video has not been released by Corn, or Corn never had it to begin with.

The explanation may be innocent, or the audio/video may be incomplete.

Given how various pundits have projected that the tape destroys Romney’s campaign, and the audio/video gap cuts off Romney’s highly publicized answer, I think we are entitled to the full audio/video, or an explanation of why we don’t have it.

Update: I found Corn’s email address, and he responded as follows:

According to the source, the recording device inadvertently turned off. The source noticed this quickly and turned it back one. The source estimates that one to two minutes, maybe less, of recording was missed.

AND, see this blog post by a reader who says he’s not buying the source’s story about the recorder stopping then being restarted, Romney Tape Gap NOT Recording Error.

[…] William Jacobson notices that the two YouTube videos representing Romney’s “complete speech” during the fundraiser have an audio break between them. He emailed David Corn of Mother Jones, who responded: According to the source, the recording device inadvertently turned off. The source noticed this quickly and turned it back one. The source estimates that one to two minutes, maybe less, of recording was missed. […]

Not too many people bought that excuse with Rosmary Woods, and the missing part of the Nixon tapes. I wonder how many people will buy it here.

[…] a look here at a cornered David Corn of Mother Jones finally admitting that, yes indeed, Mother Jones has […]