The “you didn’t build it” meme has permeated deep

The “you didn’t build it” meme has permeated deep

I guess this is the day for anecdotes.

First, the friend who texted “Omg!” after seeing 2016 Obama’s America.

Then, the carpet cleaning guy today who called this photo to our attention when told about this blog: 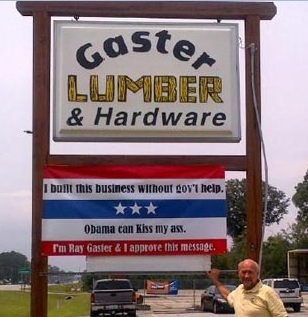 (Background on the sign here and just about everywhere.)

I spoke with him about it.  He doesn’t own the company.  But he feels it’s the hard work of owners and employees that build the company, not the government.

When Obama decided to crib Elizabeth Warren’s lines (who in turn cribbed them from George Lakoff), I said Thank you Elizabeth Warren (for possibly costing Obama the election).

I can’t yet say Warren cost Obama the election, but the possibility seems to grow stronger with each passing day.

Let’s be fair to the 1/32 Cherokee woman, the Most Brilliant Orator had truncated her incoherent argument, and made “his” argument utterly obnoxious and memorable.

I’ve come to believe Elizabeth Warren is 1/32nd Jeep Cherokee (with a sunroof where her brain is supposed to be).

A friend sent me the link to this site today and I thought it would be useful commenting on what Obama said and my reaction. His saying that “You didn’t build it. Someboday else did that.” was an insult to every person that ever started or built a business. My reation was intended to be both strong and understandable to anyone from the streets of southside Chicago. Obama is collectivist at best and one who doesn’t believe in Free Enterprise. He has never experienced it first hand, only from the outside. The left claims his remarks were about the roads, bridges and infustructure. Those roads go in many directions and are available to all. They can lead to success or failure, mediocrity or government dependence. I have yet to see a bridge make a payroll.
ALEX in his comments above is right, the greater insult by Obama was said later when he mockingly chided businessmen that they always talk about working hard. Then ginning up the crowd with there are a lot of people that work hard. “I’m always struck by people who think, well, it must be because I was just so smart. There are a lot of smart people out there. It must be because I worked harder than everybody else. Let me tell you something — there are a whole bunch of hardworking people out there.” Nothing like tearing down achievement. Just remember, all this controversy arose during the 2012 Olympics. It’s ironic that Obama chose to deride personal achievement at that very moment. Why would anyone trash personal initiative and hard work when it comes to business. Our nation is built on millions of small businesses that incrementally contribute to the great econmomy we have. Free Enterprise should be supported, not mocked.