Will media rush to judgment?

At approximately 11:35 a.m. eastern Casey Mattox of the Family Research Council tweeted that there had been a shooting at their headquarters in downtown DC. While few details are known, Mattox reports that a guard was shot.

Mattox reported that they were “on lockdown” on the 5th floor, and later made it outside. Mattox tweeted a photo a few minutes later, at 10:48 a.m. eastern: 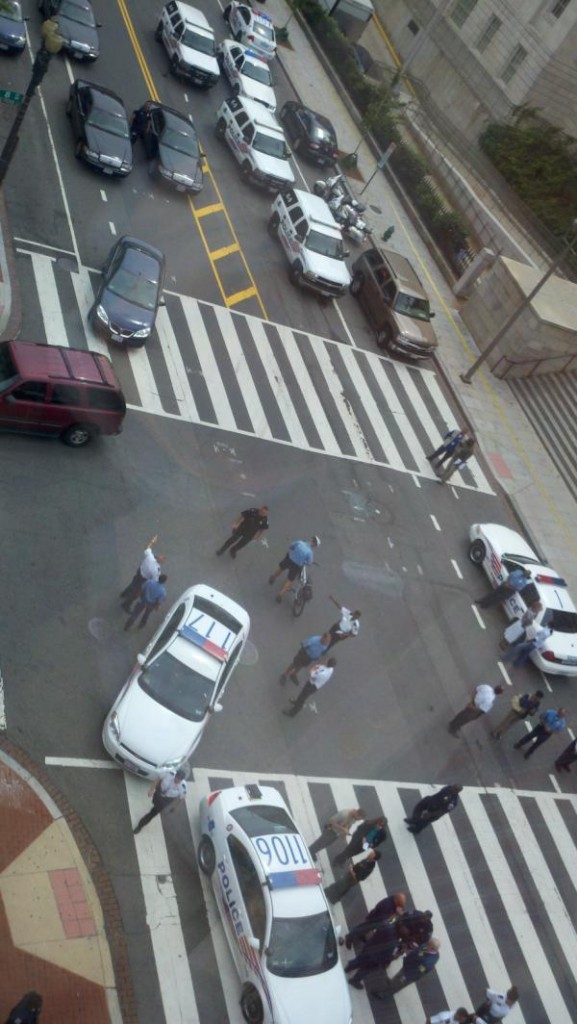 A statement was released on the FRC Blog:

Family Research Council President Tony Perkins made the following comments after an FRC security guard was shot this morning:

“The police are investigating this incident. Our first concern is with our colleague who was shot today. Our concern is for him and his family.”

The Family Research Council, a pro-Christian nonprofit, was named a hate group in 2010 by the Southern Poverty Law Center, along with such groups at the Ku Klux Klan, for its “anti-gay” positions. Professor Jacobson reported on SPLC’s exaggerations and false accusations in November 2010.

Since 1983, Family Research Council (FRC) has advanced faith, family and freedom in public policy and public opinion. FRC’s team of seasoned experts promotes these core values through policy research, public education on Capitol Hill and in the media, and grassroots mobilization. We review legislation, meet with policymakers, publish books and pamphlets, build coalitions, testify before Congress, and maintain a powerful presence in print and broadcast media. Through our outreach to pastors, we equip churches to transform the culture.

The Southern Poverty Law Center classifies the Family Research Council (FRC) as a hate group because of their “propagation of known falsehoods — claims about [lesbian, gay, bisexual and transgender] people that have been thoroughly discredited by scientific authorities — and repeated.”

It is possible this is a random act, and at this stage given that we do know the motive for the crime, we certainly do not want to jump to false conclusions.

We will update as more details are known.

Update: At 12:17 p.m. eastern, Mattox reported that a bomb squad was entering the building. ABC reports that a suspect is in custody and the guard who was shot in the arm is conscious and breathing. 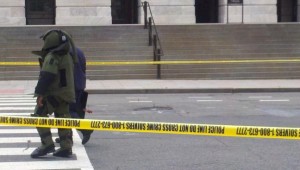 Fox News is reporting the suspect disagreed with the Family Research Council’s policies:

The suspect “made statements regarding their policies, and then opened fire with a gun striking a security guard,” a source told Fox News. WJLA-TV7 reported the suspect was also shot.

Authorities were treating the attack as a case of domestic terrorism.

Neither the Human Rights Campaign nor the Southern Poverty Law Center responded to my requests for comment.

The FRC shooting in Washington DC just made CNN — it is on in my lunch room — and the FBI is involved.

The Feebs don’t show up for something like this unless there is a Domestic Terrorism angle.

DC cops had jurisdiction off of Federal property.

If you go way down to the “other news” section of the NYT website (below such breaking wish-casting as “increasing AMTRAC use”) you’ll find the article about the apparently (to the NYT) non-ideological gunman. And “The motive of the shooting was unclear.” Perhaps only to those lefty editors with their eyes closed, fingers in ears, loudly yelling “Lalalalalalala! I can’t hear you!”

Don’t hold your breath that Obama will comment on this or call the security guard and thank him. Likely, a sudden investigation into the guard’s life is likely underway to determine the best spin on the shooting of that left-wing “victim.”

I hold obama personally responsible because his inflammatory rhetoric, “get in their face”, “reward your friends, punish your enemies”. Standing by trumka as he exhorted the union thugs “lets go get the bastards”. That is much more evidence than the left had as they tried to blame Palin for the Tucson shooting. That is only from memory, a google search of his “inspirational” speeches would fill a portfolio.