The line up is packed tonight, including Mia Love, who just finished her speech:

If you haven’t contributed to her Money Bomb, what are you waiting for?

Need more motivation, read what some smug creep at The Nation says about people like Mia, RNC Schedule: Tokenism Extraordinaire.  Tokens? People like that writer are the real racists, they demean accomplished people like Mia because of the color of her skin.  Don’t get mad, get even.

Update:  Via Instapundit, someone is in the process of trying to deface Mia Love’s Wikipedia page, calling her a ” a dirty, worthless whore who sold out her soul in the name of big business ….” and in a later attempted edit, “She is also a whore, and hopefully the editor who reverts this hates her as much as I now do.”  Here’s a screen shot: 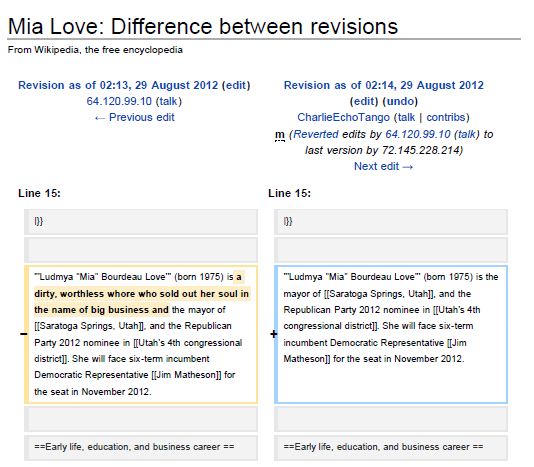 Woke up this morning and checked to see what the LSM coverage of the convention was. Here it is in a nutshell:

“There were some speeches at the Republican convention tonight but look at this poll showing nobody likes Mitt Romney.”

The bias is beyond belief.