Pointing out media double standard is not “crying racism”

Pointing out media double standard is not “crying racism”

Jack Fowler of National Review Online writes about the double standard perpetuated by the media, recently at-play in coverage of the anti-Chick-fil-A activists we videotaped this week.

So where are the folks who are always crying “racist,” because surely this does qualify? Watch this vile dude mock a black street preacher, in a video taken last week by my good pal Anne Sorock, who writes about the incident at Legal Insurrection. As usual: Imagine if this was a conservative doing the mocking — MSNBC would be in its fifth straight day of 24-hour coverage about right-wing bigots (well, I guess it would be hard to tell the difference).

Unfortunately some have reacted to his piece by either completely failing to see his point, or trying to distract from the double-standard argument.

No, this does not qualify as racism. To be fair, I am not one of those “folks” who are always crying racism, so this isn’t my forte. However, it should be pretty clear that the preacher’s skin color has nothing to do with the fact that his religious views are upsetting to the gay activists protesting a chicken sandwich company for its views on homosexuality. Crying “racism” here is just petty and misses the point.

Earlier this morning, Kirell had tweeted a similar take on Fowler’s piece: 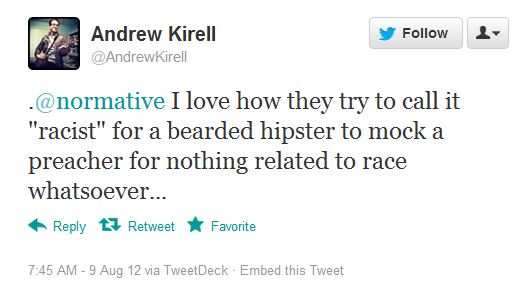 Fowler, however, was not crying racism or arguing that the incident was racist. Just the opposite.

The incident was not racially motivated but would have been portrayed as such if the “bearded hipster” had been a Tea Partier, conservative, or Republican. That is the standard applied when non-race-based criticism of Obama is portrayed in the media as racist.

Fowler was pointing out the media hypocrisy.

It seems like just the sort of media phenomenon Mediaite ought to investigate.

From the lunatic-left, d-cRAT socialist dictionary: “white racism” = anything said or done by Fox News, the Tea Party, Republicans, conservatives, or anybody that does not agree with radical, extremist, left-wing ideology, or anybody that objects to anything done by the OBOZO/pelosi regime.

From the lunatic-left, d-cRAT socialist dictionary: “black racism” or “LGBTQ&F racism” = NO DEFINITION, THOSE TERMS DO NOT EXIST