In what looks and feels like a reincarnation of the bizarre 2010 Martha Coakley rape mailer attack on Scott Brown, Elizabeth Warren has put together a graphic on her facebook page that attempts to take advantage of the Todd Akin controversy by tying Brown to some supposed Republican pro-rape agenda.

Here is what Warren posted on her Facebook page:

The agenda of the Republican Party is to limit access to health care services. It’s to deny women equal pay for equal work. It’s to cut funding for Planned Parenthood. And it’s to select as a vice presidential nominee someone who co-sponsored legislation with Rep. Akin to ‘redefine rape.’

Scott Brown and other Republicans want to pretend Todd Akin is an isolated individual, but he is clearly in line with the Republican agenda. 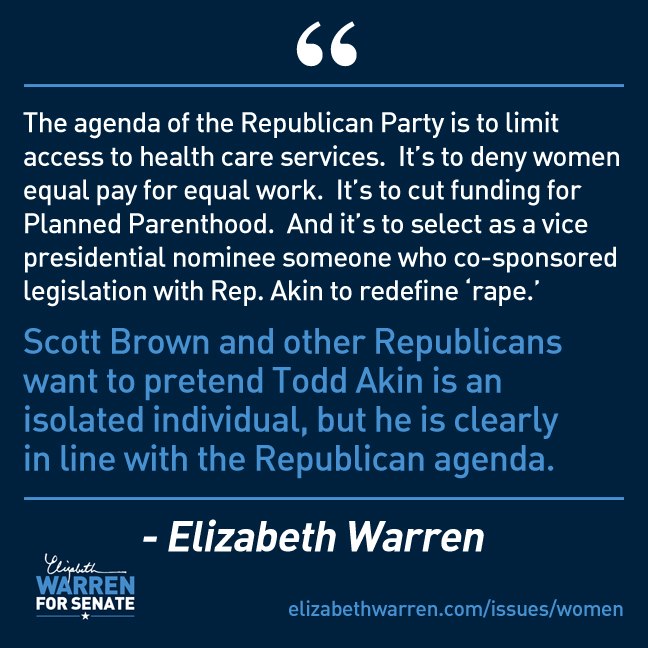 Even a supporter of Warren commented on the facebook post that this was more than a bit tenuous:

Plus, prior to Warren’s Facebook post, Brown had already called for the withdrawal of Akin over the remarks:

As a husband and father of two young women, I found Todd Akin’s comments about women and rape outrageous, inappropriate and wrong…There is no place in our public discourse for this type of offensive thinking. Not only should he apologize, but I believe Rep. Akin’s statement was so far out of bounds that he should resign the nomination for US Senate in Missouri.

Just like Martha Coakley’s supporters, Warren could not wait to try to pin the rape label on Brown for her own political advantage. Here is the mailer sent by Massachusetts Democrats against Brown in 2010. It carries essentially the same overall message (Brown is insensitive to rape victims) as Warren’s Facebook poster: 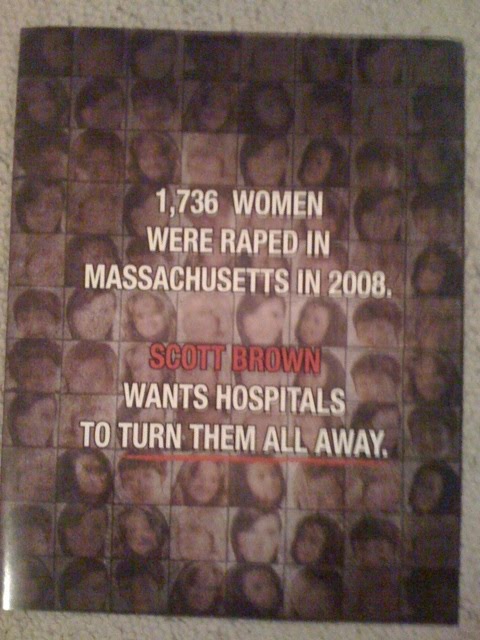 Playing the rape card unfairly came back to haunt Coakley, as Coakley was condemned even by liberal commentators.

It should be the same for Warren, who shamelessly took one of the most sensitive of crimes to make inflammatory accusations against Brown without Brown having any involvement.

The people of Massachusetts will ultimately provide judgment, as they did in 2010, as to these types of campaign tactics. Warren once again has shown herself to lack the judgment for the job.

Maybe if more of them were allowed and encouraged to get concealed carry permits there would have been fewer rapes and more dead rapists.
(Yes, I live in Mass.)

[…] at Legal Insurrection, Anne Sorock reported that Elizabeth Warren was playing the “rape card against Scott Brown” even though the Massachusetts Senator was one of the first Republicans to criticize Todd […]

[…] at Legal Insurrection, Anne Sorock reminds us that Martha Coakley played the ‘Rape Card’ against the Senator back in […]