There is no more misleading imagery than the ad run by Democrats in which a Paul Ryan-looking figure throws Granny off a cliff due to Medicare cuts: 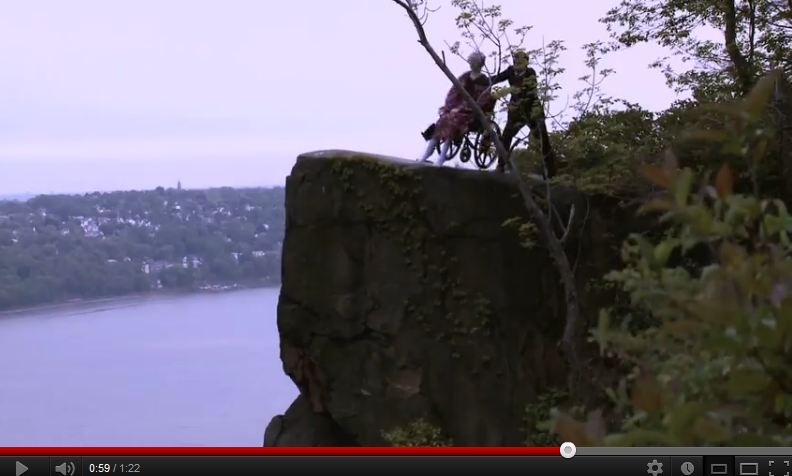 The ad has it exactly opposite to reality.  Republican proposals would keep Medicare the same for people already in the system or 10 years away from entering the system.  Nothing would affect Granny, but restructuring would save Medicare for future generations while easing the national debt burden.

There is something that will kill Medicare, Democrats’ insistence on doing nothing or relying on tax increases.  Don’t take my word for it, take Barack Obama’s word for it:

And what I’ve tried to explain to them [Democrats] is, number one, if you look at the numbers, then Medicare in particular will run out of money and we will not be able to sustain that program no matter how much taxes go up.  I mean, it’s not an option for us to just sit by and do nothing.

Mediscare is an age-old Democratic tactic, but this time it’s different because left as is Medicare goes bankrupt in Granny’s lifetime and bursts a ballooning national debt.

Prof. Glenn Reynolds, writing in USA Today, summed up the meaning of the Ryan pick:

Ryan is the expert on the often Byzantine complexities of the federal budget. His budget proposal last year, though rejected by Democrats in the Senate, represented a serious effort to rein in runaway spending. The only cogent criticism, really, was that it didn’t go far enough.

In fact, the math shows our spending is unsustainable. Nothing can save it: Not higher taxes, not lower interest rates on federal borrowing, not financial jiggery-pokery from the Fed. If we continue on this path, the result will be disaster: We’ll be Greece, with nuclear weapons.

Ryan represents the adult in the room on fiscal issues, yet Democrats now are salivating to use Ryan’s nomination as a Mediscare tactic in states with high senior citizen percentages.

But this time it is different because of our precarious fiscal position.  This is not your great grandmother’s Mediscare.

The Democratic Party electoral strategy in 2012 asks Grandparents to do something which is not in the natural order, to throw their grandchildren off a fiscal cliff.

Once grandparents understand what they are being asked to do, they will revolt against the Democrats’ revolting electoral strategy.

The GOP should run a spoof of this ad with Granny, at the edge of the cliff with an Obama double about to push her over, looking out over the scenery and declaring,

“I can see Greece from this cliff!”

Then she gets out of the wheelchair and fights back.

I can’t recall who it was by name but a visitor was writing article or articles on Americans and the USA. He said the one thing them is that if something doens’t work, Americans are not afraid tory something else. they have no “Class” structure that makes them bound to the past.
I think that is true. If wecan be “re-libertied” if that is a word, we can solve these budget/medical issues.

[…] Jacobson is quite happy with the choice and makes this important point in a post from this morning: Ryan represents the adult in the room on fiscal issues, yet Democrats now are salivating to use […]

[…] to be borne by the next generation. They understand that they’re basically being asked to throw their grandchildren off the cliff. When Rep. Ryan’s plan was passed by the House of Representatives in 2011, its greatest […]