It had a good mix of soaring rhetoric without veering into Greek columns territory.

Clearly the speech was intended to help neutralize the “war on women” theme, and I think it was effective.  I also was glad that the speech included a frontal assault on Obama’s record, false promises, and pomposity.

While you probably have seen it, here it the obligatory embed (via HotAir):

If there was a “moment” in the speech, it was when Romney told of how on the day of his father’s death his mother realized something was wrong when there was no rose by her bedside, something he had made a habit of leaving.

This screenshot of a woman’s reaction pretty much summed up the reaction I suspect many people of both sexes had: 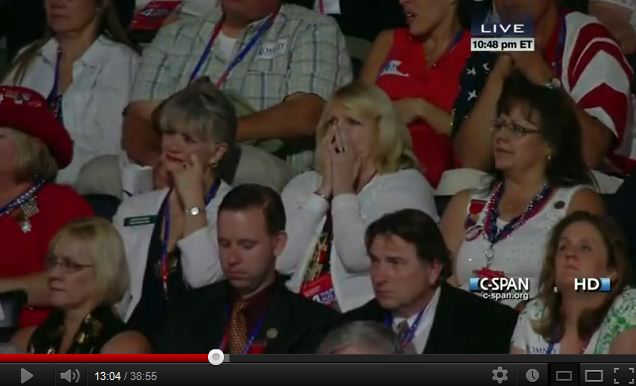 Making an emotional connection with the electorate was something Mitt Romney has not been good at.  Last night he was very good at it, and I suspect it will benefit him in ways which may not show up immediately in the polls.

Marco Rubio’s speech was equally excellent, and seeing that speech it is easy to imagine him having given it as the Veep nominee.

Clint Eastwood? It certainly was different. I just can’t decide if it helped or hurt. Just having him there probably helped at some level with the senior vote in Florida and the pro-America vote everywhere, but I would not be honest if I didn’t say I was very worried as he was speaking as to where he was going with it. Very worried.

It is what people are talking about, and how it is viewed probably reflects pre-existing cultural divides.  Old white guy beating up on young black guy seems to be a theme from the left.

Immediately after Romney spoke I switched over to MSNBC.  Heads exploding hardly begins to describe the reaction from Chris Matthews.  Romney’s mocking Obama’s promise to halt the rise of the oceans really got under their skin (video via NewsBusters):

One of the commentators on the panel (sorry, can’t remember his name, I think he might be with HuffPo) was so incensed that he launched into an explanation of how engineers in NYC were working as he spoke on how to protect the subways from rising oceans.  That part of the discussion was comedy gold.  [see update below]

Update:  The mystery man is Chris Hayes (h/t John Nolte), he not of HuffPo but of The Nation and Up with Chris Hayes on MSNBC, most famous recently for announcing he doesn’t feel comfortable calling killed soldiers “heroes.”  I still can’t find a clip of his comments last night about the subways, but if anyone does, please post in comments.

I can’t believe that you, Prof, were concerned during Clint’s address. It was masterful. My wife and I had great laughs all the way through.

Prof,,,Mr. Eastwood was fantastic. No worries.

I’m torn on this one. I’ve avoided watching Obama speeches for the past year and a half (excluding the last SOTU, which left me enraged and practically screaming at the television). But I do feel that this, like the SOTU, may warrant a watch.

He’s become such a clown, though, that I half expect him to descend from a bungee cord amid a flock of dancing vaginas. He’s so predictable, anyway, given how he gives the same speech repeatedly (me, me, me, I, I, I, blah blah “not one dime,” I, I, I, [insert any number of lies about MediCare and ObamaCareTax] me, me, me, Oh, and did I mention that I personally took out bin Laden, I, me, I, Bush did it. All of it, unless you like it, then I did it. Me, me, me, fair share, I, I, me, me, Mmm mmm mmm)

Newer items: He’ll hail the mighty vagina and explain again why “women’s health” (i.e. only those things related to reproductive organs) is important to “women’s rights” (i.e. those provided by government, witness the witless, hapless, and helpless #Julia )

He’ll pander to Jews and make lots more promises he never intends to keep about Israel.

He’ll pander to illegal immigrants, perhaps promising the people of the world automatic citizenship, whether or not they ever set foot on America’s shores.

He’ll claim that he does think you built that. So there. Then he’ll ramble about small business, talking in circles, making no sense, and being instantly rebuked for lying on Twitter (likely by me).

Then again, given the commie cred of some of the speakers, maybe he’s going to actually come out and say that he actually does believe that it’s better to spread the wealth around, that you didn’t build that, that you’ve earned enough money, and that your rights come from government not God. Naw, he’s not that honest. Or that “gutsy.”

agrh…..Jackie Mason the comedian that is.