We’ve seen the Mayors of Boston and Chicago abuse their power to drive a lawful business out of their jurisdictions by threatening to withhold business permits because the founder and President support the definition of marriage as one man – one woman.

When those threats generated an outcry even from many liberals, the same politicians, joined by the Mayors of San Francisco and D.C., used their governmental perches to try to demagogue the business out of the city by telling the business to stay away.

A Philadelphia City Councilman is getting in on the act:

The Philadelphia City Council will consider a resolution condemning Chick-fil-A for what one city leader called “anti-American” attitudes that promote “hatred, bigotry and discrimination.”

City Councilman Jim Kenney sent a letter to Chick-fil-A president Dan Cathy telling him to “take a hike and take your intolerance with you.”

“My effort is to allow people to understand that in certain segments of corporate America there are folks who are using their dollars to promote hatred, bigotry and discrimination,” Kenney told Fox News.

He is introducing a resolution to “condemn this anti-American attitude of trying to deny civil liberties that every American enjoys.”

When challenged on Twitter last night, here was his response: 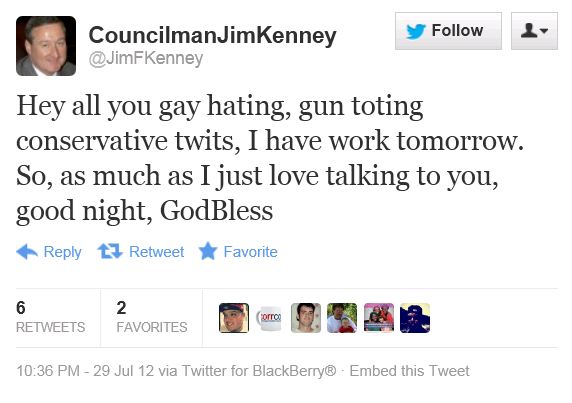 Also add New York City City Council Speaker (and possible next Mayor) Christine Quinn, who is demanding that New York University sever a contract with Chick-fil-A unless the President of Chick-fil-A changes his view on gay marriage.  As reported by The Village Voice:

Enter City Council Speaker Christine Quinn. The future mayoral candidate drew her line of opposition to the chicken sandwich purveyor, stating, “Chick-fil-A is not welcome in New York City as long as the company’s president welcomes continues to uphold and promote his discriminatory views.”

She is referring to President Dan Cathy’s remarks on his defense the ‘biblical definition of marriage’ and how America should stop questioning God – these statements were mentioned in yesterday’s piece as well. For Ms. Quinn, the ‘biblical definition of marriage’ is a far cry from reality, especially since she recently wed her longtime partner, Kim M. Catullo.

And, with that, she has started her campaign to boot this organization from NYC’s restaurant ranks.

Yesterday, Ms. Quinn wrote an open-ended letter to NYU President John Sexton – just like Mayor Tom Mancino’s letter to the Chick-fil-A establishment – that called for him to throw Chick-fil-A out of the dining hall. She writes,

“I urge you to sever your relationship with the Chick-fil-A establishment that exists on your campus. This establishment should be replaced with an establishment where the ownership does not denigrate a portion of our population.”

Liberals love the quote “When fascism comes to America, it will come wrapped in the flag and waving a cross.”

No it will not.

So, this is why the gay rights movement gets no traction with me. i am alright with gay people, hell, I come from a nation that is the largest Catholic nation in Asia, yet we’re totally fine with our gay people and whatnot. I have nothing against them. I have something against their purported voices in the government, et,al.

The beauty of America is that we are allowed our voices. The ugly side of it is that recently, we’re all told that anything ‘traditional’ or ‘conservative’ is founded truly and fully in bigotry, ignorance, and racism when they cannot see themselves being that way when they look in the mirror.

As Professor Reynolds would say “Civility for thee, not for me.”

[…] by the actions of the liberal political leaderships in Chicago, Boston, San Francisco, D.C., New York, and Philadelphia should be the ultimate wake up […]