The age of Bully Marketing

The age of Bully Marketing

We’ve become accustomed to leftist agenda-ists using campaigns of intimidation and bullying to push their way into the public school system, museums, our churches and synagogues, and of course into the old guard media. Are consumer packaged goods the final frontier?

By now you’ve probably seen the Kraft Foods “gay pride” oreo the company placed on the cookie’s facebook page. The ad was the latest in a campaign orchestrated in conjunction with advertising agency Draft FCB as part of the “History Print” Oreo campaign.

Kraft Foods is just the latest company to choose to embrace contentious issues through its consumer brands. From General Mills’s Betty Crocker, Gap, and Target’s upfront support of Gay Pride to Unilever’s Ben and Jerry’s support of Occupy Wall Street, large corporations and their brands are choosing sides in the culture war.

Of course it is their choice–and ultimately, the stockholders’–to do so. But are there externalities that impact how brands approach their marketing that, in this age, go beyond the traditional “fill a consumer need?”

Companies do appear, at least publicly, to be content with the opportunity to add the political dimension to their brands’ personas. ABC News reports:

Basil Maglaris, a spokeswoman for Oreo’s parent company Kraft Foods, said in a statement that the image was part of a “series of daily ads reflecting current events in a fun way using images of OREO cookies and milk.” Kraft is not planning to sell the rainbow-stuffed Oreo in stores, Maglaris said, as it was created solely for the advertising campaign in honor of Pride month.

“We are excited to illustrate what is making history today in a fun and playful way,” she said in an email to ABC News. “As a company, Kraft Foods has a proud history of celebrating diversity and inclusiveness.  We feel the OREO ad is a fun reflection of our values.”

But they are falling in line with a certain narrative the left has been working on over the past years. Note in particular the word “inclusive,” which comes up again and again (see the prior Betty Crocker link) as companies go through their their by-now pat defense of extreme brand politicization. Is it inclusive to introduce a highly politicized debate into a cookie’s branding, thereby opening up the opportunity to alienate a huge–if not majority–portion of your consumers? No, it is selective inclusion, a negation in terms, or as I call it, “Bully Marketing.”

As in the case of the McDonald’s happy meal toy in San Francisco, a small, relentless group of leftist activists intimidate large companies into embracing the carefully calculated leftist narrative of inclusiveness and tolerance, which really just means, promote their politics.

The most probable target market for Oreo, the leading brand in the cookie category, is children. The campaign, then has little to nothing to do with reaching the eventual target consumer, nor even the gatekeepers to Oreo purchases (parents). This is no push/pull consultant’s directive gone awry.

And Kraft’s betting that Oreo’s consumers will shrug their shoulders and keep their mouths shut, just as Americans have in all other areas of our lives as we cave in to a small group’s extreme views being pushed on us and our children. After all, none of us like being bullied. That’s why there’s a government website dedicated to stopping the practice. 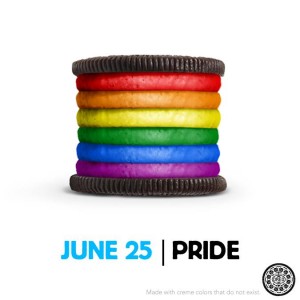 good grief…companies have been celebrating pride month in their adverstising for years. i can recall an absolut vodka ad from twenty years ago that was very similar to this oreo image. i don’t know where you folks have been, but the world seems to have slipped past you. but please, go ahead…rage against the rainbow oreo but do know that it makes you look very, very foolish.

I had no idea that simply supporting gay rights was now considered a “contentious issue”. You’ve got General Mills saying that supporting discriminatory laws is a bad thing. You’ve got a rainbow Oreo cookie supporting gay rights. How exactly are these things harming anyone? — So when Chick-Fil-A comes out in support for “traditional” God-sanctioned marriage and families, they’re being inclusive?

When did supporting gay rights equal an attack on so-called “family values”? Why must gay people be discriminated against in order for straight families to be successful? I think the ideology goes something like this: 1. Gay people are considered equal members of society. 2. All sorts of bad things will happen. 3. Straight families will be destroyed, and children will be scarred for life.

How does an ad bully you? Especially one that doesn’t mention you or your sexual orientation? Are you saying that the Oreo is your exclusive cookie? The cookie of the heterosexual people? It’s a *freaking cookie*. There are no politics in baking, for Pete’s sake. Chill the freak out.

Umm, guys? Some of you seem to be thinking that only gay people support gay rights. This is either extreme stupidity or pathetic wishful thinking. The majority of Americans eventually come around to supporting equality, whether it is white people supporting the end of Jim Crow, men supporting women’s right to vote, straight Americans (your so-called 98%) supporting our gay compatriots.

And the day you start whining about a cookie being a bully, well, you’re definitely scraping the bottom of the barrel.