Chicagoans are used to politicians running roughshod over our city. It’s a war zone today, but not just from the drug cartel and gang shootings that are ravaging our neighborhoods. The politicians from the local up to the federal think they’re little kings, who use favors and privilege to keep our city in the grips of their rule. In the case of banning Chick-fil-A, however, we have the opportunity to shake our politicians up and down and show them just how little they understand about those whom they claim to represent.

Among other things, we still like the U.S. Constitution and would appreciate it being applied within our city boundaries (see the Second Amendment case for reference).

Alderman Joe Moreno of Chicago, who represents a gentrified neighborhood close to the city’s downtown, has used “Aldermanic Privilege” to ban the construction of a Chick-fil-A restaurant because the owner supports traditional marriage based on his Christian faith. Boston Mayor Menino has now admitted he was wrong to suggest he would prevent a Chick-fil-A in downtown Boston.

Chicago Mayor Rahm Emanuel said that he supported Chicago Alderman Joe Moreno’s decision to ban Chick-fil-A because it doesn’t represent “Chicago Values” and besides, the restaurant would be “empty” because of it.

I wanted to test his proclamation about our denizens’ values. So I went to the downtown Chicago Chick-fil-A restaurant Wednesday at 1:30pm to see just how empty it was. It wasn’t.

Well past the lunch-hour rush, the restaurant was still noticeably crowded. It was also clean, the workers friendly, and while I had to wait to be served, the line moved quickly. 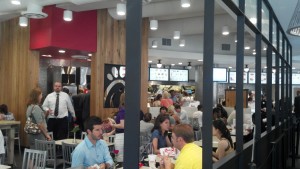 If Mayor Rahm Emanuel believes he knows what Chicago Values are, then he must need to explain them to all the patrons of this restaurant. The city of Chicago is one of the most diverse cities in the world, and part of that diversity are a range of religious people, many of whom share Cathy’s view on traditional marriage.

In the meantime, the Nation of Islam has been allowed to open a restaurant, they must pass Rahm Emanuel’s definition of “Chicago Values,” which have yet to be defined. The term remains murky to me and many of my fellow Chicagoans as Louis Farrakhan has expressed anti-gay views and yet his organization has been allowed to do business in the city. It turns out the Nation of Islam has also been welcomed by Emanuel to deploy an “army” of 500 to help police the streets.
Late Thursday the Chicago GOP announced it was filing a complaint with the Illinois Department of Human Rights and Attorney General Lisa Madigan. Yet Alderman Moreno, whose stance has been criticized by both progressives (here too) and conservatives, released a statement, where he attempts to defend his use of “Aldermanic privilege.”

Moreno’s self-described “hipster ward” may agree with his personal view on gay marriage. Whether they agree that the personal religious views of business owners ought to be vetted and discriminated against before they open up in their Ward is less clear. In an attempt to impose his personal views onto his Ward, Alderman Moreno is discriminating against a business based not on the company’s actions or policies but on this individual’s freedom of religion and speech. Adam Serwer at the far-left magazine Mother Jones writes:

Menino and Moreno have it wrong. Blocking construction of Chick-fil-a restaurants over Cathy’s views is a violation of Cathy’s First Amendment rights. Boston and Chicago have no more right to stop construction of Chick-fil-As based on an executive’s anti-gay views than New York City would have had the right to block construction of an Islamic community center blocks away from Ground Zero. The government blocking a business from opening based on the owner’s political views is a clear threat to everyone’s freedom of speech—being unpopular doesn’t mean you don’t have rights. It’s only by protecting the rights of those with whose views we find odius that we can hope to secure them for ourselves.

“We think there’s a constitutional problem with discriminating against someone based on the content of their speech,” says John Knight, director of the LGBT rights project at the Illinois branch of the American Civil Liberties Union. And Illinois law does not demand that restaurants have anti-discrimination policies in place—”It’s a good idea for restaurants to have those policies,” Knight says, but the law doesn’t require it.

Alderman Moreno, Mayor Menino, and Mayor Emanuel’s discrimination hardly sounds progressive with a small “p,” but it does represent the #ChicagoValues Rahm Emanuel has helped foster, and brought to Washington, D.C., in the form of our President Barack Obama.

Now if only Rahm would spell out exactly what views business owners hoping to provide jobs in Chicago are not allowed to hold, we could all adjust accordingly.

Or take our businesses elsewhere. It’s clear Emanuel thinks the patrons of Chick-fil-A don’t share these as-yet-undefined Chicago Values. All Chicagoans can conclude is that Louis Farrakhan and the Nation of Islam do.

Chick-fil-a has one less restaurant that will be robbed and in which one less person will be murdered.