Reader duchess of kitty attended, and sent this report, video and photo:

This was just one of the many “Get Out The Vote” rallies the Tea Party (the TX Tea Party as well as the Tea Party Express) are doing across the state on behalf of Ted Cruz in this runoff. At the Town Green Park at the Woodlands, attendance was probably between one and two thousand, with most arriving just as it began. The sun was still scorching hot at 6 pm, but the people who showed up didn’t care. They were from all walks of life and many ethnic backgrounds.

A few of the leaders of the Tea Party locally and in the state of TX were present with Ted Cruz and Sen. DeMint, including those from the Dallas area – exactly the ones David Dewhurst swore he was going to meet with the same day, in Dallas!

U.S. Senator Jim DeMint (R-SC) spoke for about seven minutes. His take: his job in Washington, DC is a lonely one. He needs more help – more Conservatives in Washington to help him get things done.

Then, Ted Cruz spoke.  I must say that I didn’t waste my vote, either in the May primary or my early runoff vote. He’s the real deal. He spoke of Dewhurst’s attack ads. He said that his wife, who was present, said she did not know her husband was that nasty. Even their children were surprised they were “Chinese”! Throwing everything plus the kitchen sink at this man has risen to levels never before seen in TX. Personally, those ads turned me cold from ever voting for Dewhurst, and I will not be surprised it was the same way for many of Cruz’s supporters. It is obvious from the crowd’s response that they will support Cruz until the bitter end.

He vowed to repeal Obamacare. “Every last word of it,” he emphasized. He also directed his message to the small business owners present there, emphasizing the need for the entrepreneurial sector to be unleashed in this country, with as little red tape as possible. As I said before, they are furious at Obama, and it showed. One man in the crowd even called The One a “Traitor!” That “didn’t built that” wound is still bleeding profusely: it may never heal.

Then, the Mama Grizzly spoke. Sarah Palin looks a hundred times better in person than on TV. Can you believe she’s a grandma in her mid-forties? Get outta here! She wore cowboy boots, which she said were a gift from Governor Rick Perry. “That was one good thing he did, right?” she pointed out.

There were words of warning for the GOP establishment in Washington, who love to “go with the flow” of things. The warning came in an analogy to Todd’s work as a fisherman at Bristol Bay, and she didn’t mind to repeat what he has learned: “Dead fish always go with the flow.”

Sarah is right where she’s needed. She understands that, in order to restore a fully functional Constitution-based government, leadership and enthusiasm must be built from the ground-up, among the American people who take pride in their freedoms, the Constitution, their work and every-day lives. I think she knows in her heart that the Presidency for her would be a very bad idea right now. She is needed to work her magic and her sticking-with-it drive under the radar, while few people in DC notice. This way, she will accumulate ten trucks full of IOU’s for later, if she ever seeks national office in the future. But right now, it is in each local and state race where the tide must rise. Slowly, but it must.

I do believe Sarah Palin’s endorsement of Ted Cruz was the decisive factor for this GOP primary election to go into runoff mode. What I saw at this rally confirmed that. Ted Cruz is not just another politician and it shows. This is the kind of leadership the Tea Party is trying to and must cultivate – the same kind the establishment in DC fear the most. This type of work is not easy, but it must be done, if sanity is ever to be restored into our body politic.

Oh, did I tell you people also voted with their stomachs? Some went to the rally with their drinks from Chick-fil-A. Even Sarah said she wanted to catch a bite there before she departed. Who knows? She probably did.

Actually, she did stop by Chick-fil-A. More on that in the next post. 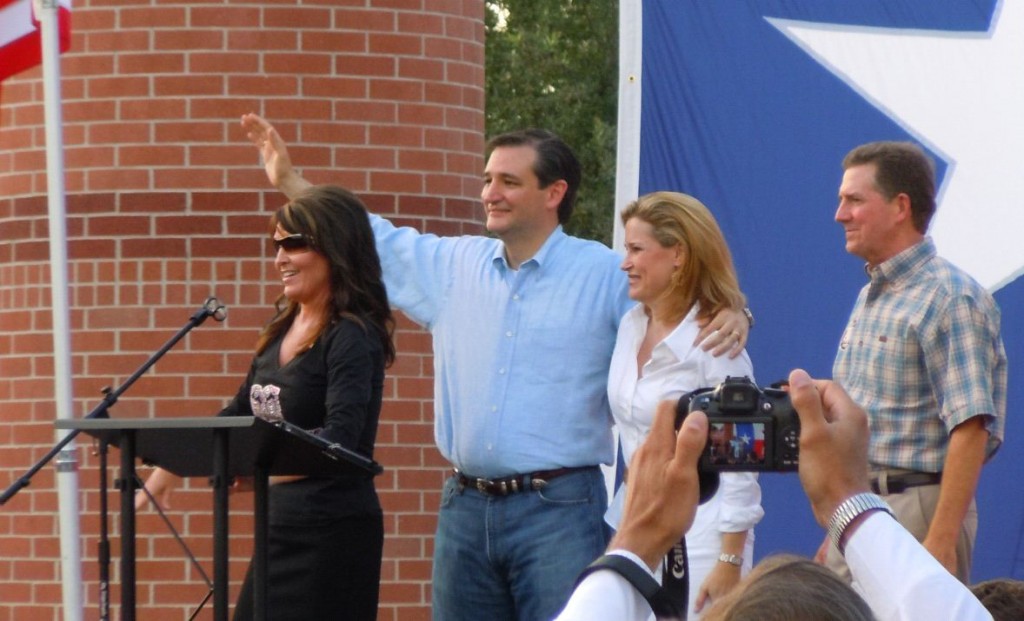 Thank goodness for Jim DeMint too.

Thanks for the report, Miss Kitteh!!

We were stuck on I45, if you can believe that!

I kept checking to see if there was anyone else of our chatting group there, so we could compare notes. But it felt a little sad I was alone.

Yet, the crowd I witnessed was very friendly, even to the media. I noticed one lady dressed in a black summer dress, next to me. I did a quick study of her: it turns out she was a reporter for the Austin American Statesman. I didn’t bother her at all because I figured she was on the job, but whatever junk you see in that newspaper today, don’t believe it.