We’re in La La Land, and my wife and I had the pleasure of meeting up with commenter LukeHandCool (below) and his wife, and separately with Cassandra Lite.

The photo is overlooking the left coast in Santa Monica.

Don’t worry, we’re not going to do the Althouse-Meade thing. 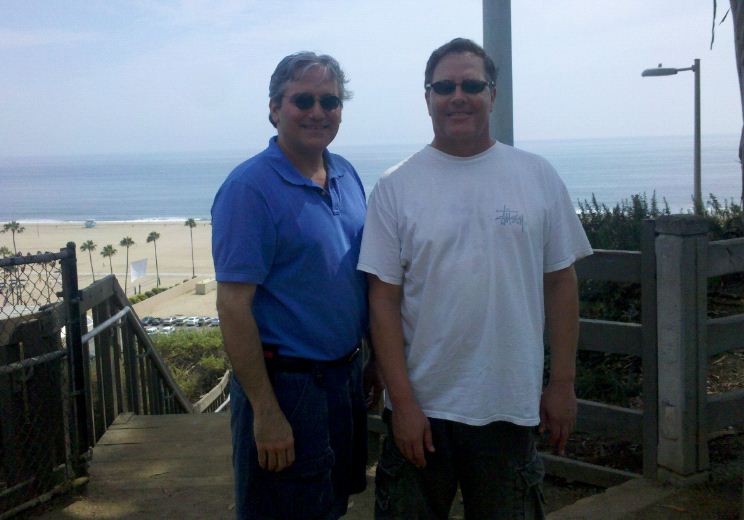 What a nice photo! I already knew the Professor was handsome, but, LHC, you are not as I pictured you. Your posts are always so thoughtful and kind that I didn’t expect you to look like the Adam Baldwin of LI.

I am very happy to hear that the Jacobsons are awesome and very sad to hear that Fred MacMurray was a jerk. Please don’t tell me that my old Hollywood boyfriend, Dana Andrews, was a jerk too. I don’t want to know.

Flattery will get you everywhere, angela!

I don’t think Mr. MacMurray was a bad man. You never know what’s going on with people in their lives that might make them grumpy.

His wife, the actress June Haver, came in more often than Mr. MacMurray. She was always very sweet and pleasant, but seemed kind of shy and private.

I just checked Wikipedia to see if she was still alive, but she passed in 2005.

He was already in his seventies when he was our customer, so he could’ve been in bad health … which usually does affect one’s demeanor. He did talk loudly and seemed a bit hard of hearing when he came in … just like Lorne Greene.

I didn’t know all that about him.

So, for adopting four children, God Bless him.

I hope he’s resting in peace, and that episode in our store was no big deal in the big scheme of things.

I find it kind of funny, now.

See what I mean? Thoughtful and kind, even to a jerk like Fred MacMurray. 🙂

I guess I feel guilty that my mom tried to run him over!

On a completely non-serious note, I am a little jealous that you grew up in So. California. My dad is a huge Beach Boys fan and I have been listening to them since I was in the womb. When you grow up in Michigan, songs about surfing and So. California car culture are like a sweet, sweet drug, especially in, say, deepest, darkest January. I have piles of books on So. California architecture and mid-century Kodachrome L.A. life…but I’ve never been there. My goal is to take Route 66 all the way from Chicago to the Santa Monica Pier. I’m sure So. Cal won’t let me down, right? 🙂

And, to bring this back to politics, the Beach Boys are pretty solid Republicans. I saw them two weeks ago on their 50th anniversary tour and their drummer was wearing a t-shirt supporting a conservative running for Senator Stabenow’s seat.

Well, I do have a little Beach Boys trivia. I do so love trivia.

Alice Lilly, who started their fan club, and who still runs it as far as I know, got all the printing of the fan club newsletter done at our store until she moved to Las Vegas.

Every time she’d come in, we would talk about … The Beach Boys. Her whole life revolved around them. And she was always following them to every concert.

David Leaf was a writer who came in a lot, and he wrote a biography about Brian Wilson and quite a few other books about the history of rock.

If you know L.A. radio, Rodney Bingenheimer, “The Mayor of Sunset Strip,” still has his show every Sunday night at midnight on KROQ.

In the 1970s, his show was the one introducing punk and new wave from the U.K. (as well as American acts like The Ramones).

The funniest moment I’ve ever heard live on radio, was on his show, circa 1980, when he and a couple guests in the studio called up Brian Wilson at home to wish him a happy birthday.

This was during the time when Brian was a complete recluse … he had a piano set in a sand box in his bedroom.

Brian sounded terribly uncomfortable. They wished him a happy birthday and Brian said,

“I … I … I love the people,” like he was some recluse king in a palace, reluctantly addressing his subjects from an open window high above.

Rodney replied, “We love you, too, Brian.”

It was so awkward and bizarre. A friend who had also been listening called me on the phone laughing and said, “You should’ve heard Rodney talking to Brian Wilson … it was hilarious.”

I was laughing, too, and he asked, “You just heard it, too?”

For years, whenever we got together, instead of saying “good-bye,” when we parted, we would always say goodbye by acting out that classic moment:

Friend: We love you, too!

Oh, and if you like Jan & Dean, they attended University High School, where they started their act. It’s just a few blocks away from our house.

“My goal is to take Route 66 all the way from Chicago to the Santa Monica Pier.”

My parents were from Chicago. We have a wonderful picture of my mom as a bathing beauty here in Santa Monica at the age of 15, having driven here with her parents and little brother on vacation all the way from Chicago.

It’s funny that years later this is where she ended up as a young wife and mother.

Life and all its details and trivia is fascinating, isn’t it?

Yes! Alice of the BBFUN newsletter. My dad was a subscriber for years. He might be still if it’s still around.

I have read all of David Leaf’s BB stuff. If I recall, he also did the liner notes to the box set that I have. Five discs of BB music. My dad gave it to me for Christmas one year because I kept stealing his to listen to.

I’m not sure how I know about Rodney Bingenheimer (KROQ!), but I do. Poor Brian, his brain is fried by drugs and mental illness. I’ve seen him solo a few times in the past 10 years and then again with the BBs a few weeks ago. It’s confusing to watch him because he seems out of it for long stretches of time but will perk up and seem coherent for awhile. And then he sits down and stares into space again…

When my dad and I went to see him on his Pet Sounds tour, he did a meet and greet after his set and we got up to within 2 feet of him but looked at each other and decided to leave. He looked like a zombie, he just wasn’t “there” and we couldn’t bring ourselves to break into his world.

“I…love the people.” That’s great. I will have to tell my dad about that one. He will enjoy it. Thanks for your memories. 🙂

Alice was (is) something else. What a character!

She put the fan in fanatic.

My dad misunderstood him once about something … and semi-threw him out of our store (like he did to so many of our customers!!)

My mom and I just loved David, so we both chastised my dad for doing it, and told him never, ever to treat David like that again!

I had never talked to my dad that way before (because he was an extremely intimidating person).

But my dad realized by our reaction that he had been wrong.

Thankfully David came in again soon and my mom, my sisters, and I all apologized to him and told him just to ignore my dad! 🙂

He was a sweet, sweet guy … he was embarrassed by the whole thing.

He and I were talking once about the BBs and I brought up Alice, and he knew her!

And here you know about Alice and David.

That’s sad about Brian’s state which you and your father saw up close.

I believe he was mercilessly psychologically abused by his father, wasn’t he? I might be mixing him up with someone else.

Professor, I also would like to invite you to come visit us in the Bay Area. We’ll show you the East Bay.