He started a joke

He started a joke 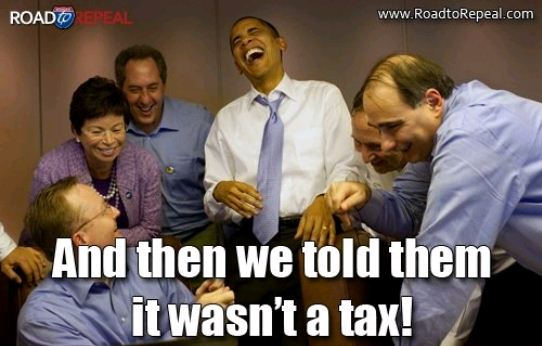 And the laughs continue:

I might remind some that Bush appointed Roberts. The conversation at that time was that Roberts would be against abortion. What people don’t seem to understand is that if you want government to control the body functions of a woman then that person has no problem controling any other aspect of society. They are big government and not committed to freedom. Many of the people who have been elected by the Republicans are committed to controling people’s lives. So why are we surprised that a prominent Republican would uphold this terrible law?

As a physician, I can assure you that the US can not afford what is coming. I know that the law will kill our economy and drive unemployment. I know that the quality of medical care will take a nose dive, even as we are told it is much better (with stats). All doctors train in government controled medical facilities and we know what government can do, it is not pretty. In the 80’s we had the best medical system in the world. At that time, the government took on the task of fixing it. Thus, we have the problems of today. Imagine what will occur in the next 10 years. I have taught medical students and seen what is coming to you, I would suggest getting your medical problems taken care of in the next few years.

George S. on “This Week” couldn’t get a straight answer out of Lew either – he asked him flat out 3 times about whether it was a tax or not and couldn’t get an answer. He finally gave up and went to another question, but it looked like GS was a bit perturbed at the lack of an answer from Lew.